An Overview of Enterprise VPN – Virtual Private Network. A VPN (Virtual Private Network) is a concept which helps enterprise companies with distributed offices to connect to each other securely over the Internet – In this article, we would touch upon the introduction and advantages of VPN, popular ways of establishing a VPN, types of VPN, advantages of SSL/TLS and IPSec VPN. 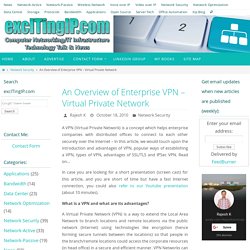 Read on… In case you are looking for a short presentation (screen cast) for this article, and you are short of time but have a fast Internet connection, you could also refer to our Youtube presentation (about 10 minutes). What is a VPN and what are its advantages? A Virtual Private Network (VPN) is a way to extend the Local Area Network to branch locations and remote locations via the public network (Internet) using technologies like encryption (hence forming secure tunnels between the locations) so that people in the branch/remote locations could access the corporate resources (in head office) in a secure and efficient manner. Remote-Access VPNs: Business Productivity, Deployment, and Security Considerations. Choosing Remote-Access VPN Technologies, Securing the VPN Deployment Defining Remote-Access VPNs Remote-access VPNs allow secure access to corporate resources by establishing an encrypted tunnel across the Internet. 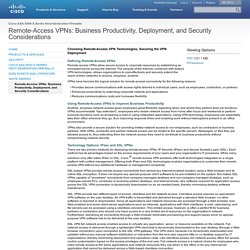 The ubiquity of the Internet, combined with today's VPN technologies, allows organizations to cost-effectively and securely extend the reach of their networks to anyone, anyplace, anytime. VPNs have become the logical solution for remote-access connectivity for the following reasons: • Provides secure communications with access rights tailored to individual users, such as employees, contractors, or partners • Enhances productivity by extending corporate network and applications • Reduces communications costs and increases flexibility Using Remote-Access VPNs to Improve Business Productivity Anytime, anyplace network access gives employees great flexibility regarding when and where they perform their job functions.

Technology Options: IPsec and SSL VPNs Table 1. Table 2. Figure 1. Equipment Used in a VPN. While a VPN can be configured on generic computer equipment such as standard servers, most businesses opt for dedicated equipment optimized for the VPN and general network security. 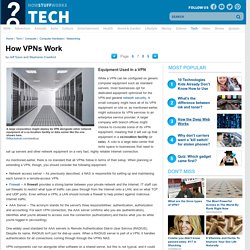 A small company might have all of its VPN equipment on site or, as mentioned earlier, might outsource its VPN services to an enterprise service provider. A larger company with branch offices might choose to co-locate some of its VPN equipment, meaning that it will set up that equipment in a co-location facility (or colo). A colo is a large data center that rents space to businesses that need to set up servers and other network equipment on a very fast, highly reliable Internet connection. As mentioned earlier, there is no standard that all VPNs follow in terms of their setup. When planning or extending a VPN, though, you should consider the following equipment: One widely used standard for AAA servers is Remote Authentication Dial-in User Service (RADIUS). 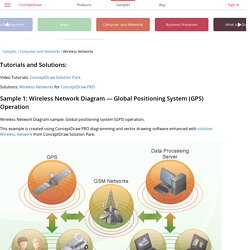 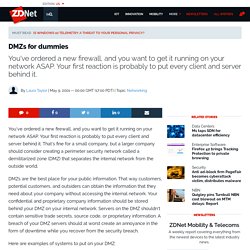 Your first reaction is probably to put every client and server behind it. That's fine for a small company, but a larger company should consider creating a perimeter security network called a demilitarized zone (DMZ) that separates the internal network from the outside world. DMZs are the best place for your public information. That way customers, potential customers, and outsiders can obtain the information that they need about your company without accessing the internal network. Your confidential and proprietary company information should be stored behind your DMZ on your internal network.

Here are examples of systems to put on your DMZ: A Web server that holds public information. Typically services like HTTP for general public usage, secure SMTP, secure FTP, and secure Telnet are deployed on the DMZ. To build a DMZ, your firewall has to have three network interfaces, as most nowadays do. Network Security Design Chapter 5. CNT4704 Final Project4 Packet Tracer. CNT4704 - Final Project IP Addressing Scheme. CNT4704 - Final Project configs.