White Privilege, Explained in One Simple Comic. White privilege can be a tricky thing for people to wrap their heads around. If you’ve ever called out white privilege before, chances are you’ve heard responses like “But I’m didn’t ask to be born white!” Latinos Admit to Being 'Murderers,' 'Traffickers' and 'Thieves' in Anti-Trump Ad. Earlier this week, Republican group Our Principles PAC used presidential candidate Donald Trump's own words against him in an ad featuring women reading his offensive quotes about the opposite sex. 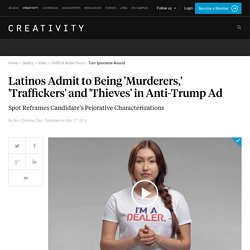 Now, the CHIRLA (Coalition for Humane Immigrant Rights of Los Angeles) Action fund has turned Mr. Trump's statements about Latinos against him in another spot. The ad features various Latinos "owning up" to the characterizations Mr. Trump had made of them as dealers, killers, murderers, attackers, traffickers and thieves, each wearing a t-shirt with those titles. "I am a dealer," "I am a killer," "I am a thief," "I am an attacker," they say. The Top 10 Lies Keeping Us from Eradicating Racism. Panel 1 Text: White Lies: A “Top Ten” List. 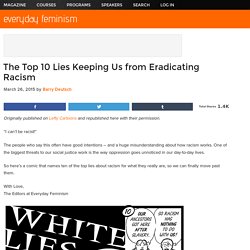 Person 1: If I’m also lying to myself, then it’s not a real lie, right? Panel 2 Text: #10 Person 2: Our ancestors got here after slavery. Person 3: So racism has nothing to do with us. Panel 3 Text: #9. When You 'Don't See Color,' You're Contributing to the Everyday Racism Around You. Panel 1 Five people with smiles on their faces. 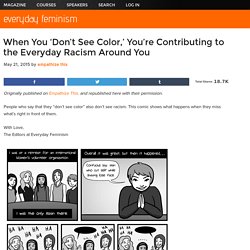 Text: I was at a retreat for an international Women’s volunteer Organization. I was the only Asian there. Panel 2 Person 1 is with a smile on the face and folded hands. Person1: Confucius say: man who cut self while shaving lose face. Text: Overall it was great, but then it happened… Panel 3 The people on the left and right are laughing with wide grins on their faces and eyes closed, while the person in the middle has a smaller smile on the face with one hand folded across the middle and eyes open. Text: I don’t know why I laughed along. Panel 4 Person on the left says something with a big smile on the face, open eyes, and hands up and palms facing out. Text: And then it happened again. Panel 5 Person on the left laughing out loud with eyes closed, HA’s above the head. Text: …and again. US Slavery Isn't Over – Here's How It Turned into Mass Incarceration.

In 1619, when the first Africans were brought to the British colonies by ship to Jamestown, Virginia, they held the legal status of servant. 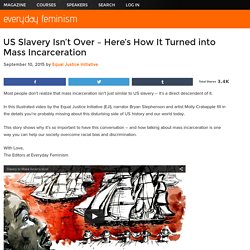 But as the region’s economic system became increasingly dependent on forced labor, we descended into slavery. The institution of American slavery developed as a permanent hereditary system centrally tied to race. Millions of black people were forcibly taken from Africa, crammed on ships, and brought to the Americas through a dangerous and deadly journey that crossed the Atlantic. Millions died. Once on our shores, slavery deprived the enslaved person of any legal rights or autonomy and granted the slave owner complete power over the black men, women, and children legally recognized as property. An ideology of white supremacy, a narrative of racial difference, was created to rationalize and justify the continuation of slavery. American slavery was often brutal, barbaric, and violent. Steamboats carried slaves along the Alabama river. 3 Lies From 'Responsible' Consumerism That Are Pandering To Your White Guilt.

The world of advertising is a sinister place. 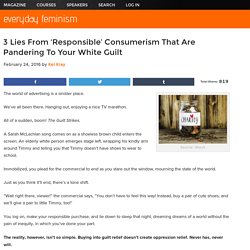 We’ve all been there. Hanging out, enjoying a nice TV marathon. All of a sudden, boom! The Guilt Strikes. A Sarah McLachlan song comes on as a shoeless brown child enters the screen. Immobilized, you plead for the commercial to end as you stare out the window, mourning the state of the world. 3 Reasons We Cannot Cater to White Friends Who Say 'I’m Not Racist' My journey from inner city Cleveland to the suburbs and then to a university where only 3% of the students were Black like me was a constant struggle. 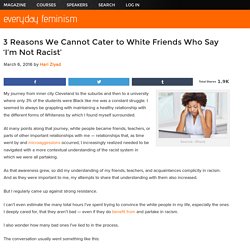 I seemed to always be grappling with maintaining a healthy relationship with the different forms of Whiteness by which I found myself surrounded. At many points along that journey, white people became friends, teachers, or parts of other important relationships with me — relationships that, as time went by and microaggessions occurred, I increasingly realized needed to be navigated with a more contextual understanding of the racist system in which we were all partaking. As that awareness grew, so did my understanding of my friends, teachers, and acquaintances complicity in racism. And as they were important to me, my attempts to share that understanding with them also increased.

But I regularly came up against strong resistance. I also wonder how many bad ones I’ve lied to in the process. The conversation usually went something like this: 4 Ways White People Can Process Their Emotions Without Bringing the White Tears. 6 Ways Well-Intentioned People Whitesplain Racism (And Why They Need to Stop) Picture this: You’re fed up with being the target of street harassment. 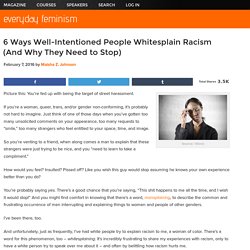