Kees van Dongen : art sensuel et criard. Cornelis Theodorus Maria 'Kees' van Dongen (26 January 1877 – 28 May 1968) was a Dutch-French painter and one of the Fauves at the controversial 1905 Salon d'Automne exhibition. 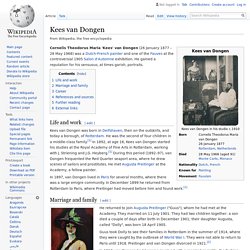 He gained a reputation for his sensuous, at times garish, portraits. Life and work[edit] Kees van Dongen was born in Delfshaven, then on the outskirts, and today a borough, of Rotterdam. He was the second of four children in a middle-class family.[1] In 1892, at age 16, Kees van Dongen started his studies at the Royal Academy of Fine Arts in Rotterdam, working with J.

Striening and J.G. In 1897, van Dongen lived in Paris for several months, where there was a large emigre community. Marriage and family[edit] Woman with Large Hat, 1906 He returned to join Augusta Preitinger ("Guus"), whom he had met at the Academy. Guus took Dolly to see their families in Rotterdam in the summer of 1914, where they were caught by the outbreak of World War I. Career[edit] From 1959, Kees van Dongen lived in Monaco. References Sources. Maurice de Vlaminck - Wikipedia. Maurice de Vlaminck (4 April 1876 – 11 October 1958) was a French painter. 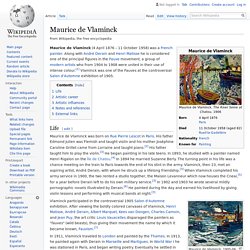 Along with André Derain and Henri Matisse he is considered one of the principal figures in the Fauve movement, a group of modern artists who from 1904 to 1908 were united in their use of intense colour.[1] Vlaminck was one of the Fauves at the controversial Salon d'Automne exhibition of 1905. Life[edit] Maurice de Vlaminck was born on Rue Pierre Lescot in Paris. His father Edmond Julien was Flemish and taught violin and his mother Joséphine Caroline Grillet came from Lorraine and taught piano.[2] His father taught him to play the violin.[3] He began painting in his late teens. In 1893, he studied with a painter named Henri Rigalon on the Île de Chatou.[4] In 1894 he married Suzanne Berly. Maurice de Vlaminck, 1905-06, Barges on the Seine (Bateaux sur la Seine), oil on canvas, 81 x 100 cm, Pushkin Museum, Moscow Vlaminck participated in the controversial 1905 Salon d'Automne exhibition. André Derain : co-fondateur du fauvisme avec Matisse. 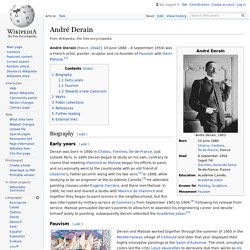 Towards a new classicism[edit] At about this time Derain's work began overtly reflecting his study of the Old Masters. After the war, Derain won new acclaim as a leader of the renewed classicism then ascendant. Mouvement artistique et artistes. Henri Matisse - Wikipedia. Henri Émile Benoît Matisse (French: [ɑ̃ʁi emil bənwɑ matis]; 31 December 1869 – 3 November 1954) was a French artist, known for both his use of colour and his fluid and original draughtsmanship. 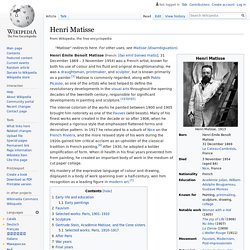 He was a draughtsman, printmaker, and sculptor, but is known primarily as a painter.[1] Matisse is commonly regarded, along with Pablo Picasso, as one of the artists who best helped to define the revolutionary developments in the visual arts throughout the opening decades of the twentieth century, responsible for significant developments in painting and sculpture.[2][3][4][5] The intense colorism of the works he painted between 1900 and 1905 brought him notoriety as one of the Fauves (wild beasts). Many of his finest works were created in the decade or so after 1906, when he developed a rigorous style that emphasized flattened forms and decorative pattern.