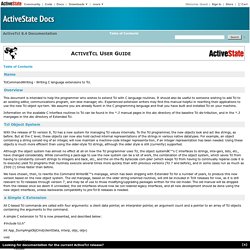 Overview This document is intended to help the programmer who wishes to extend Tcl with C language routines. It should also be useful to someone wishing to add Tcl to an existing editor, communications program, win-dow manager, etc. Information on the available C interface routines to Tcl can be found in the *.3 manual pages in the doc directory of the baseline Tcl dis-tribution, and in the *.3 manpages in the doc directory of Extended Tcl. Tcl ObjectSystem With the release of Tcl version 8, Tcl has a new system for managing Tcl values internally. Although the object system has almost no effect at all on how the Tcl programmer uses Tcl, the object systemâ€™s C interfaces to strings, inte-gers, lists, etc., have changed considerably. A Simple CExtension A simple C extension to Tcl is now presented, and described below: #include tcl.h" int App_DumpArgsObjCmd(clientData, interp, objc, objv) void *clientData;

Fractal. Visual Cryptography - A fractal approach Introduction History The word fractal was coined by Mandelbrot in the 1970s. 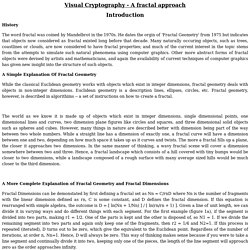 He dates the orgin of 'Fractal Geometry' from 1975 but indicates that objects now considered as fractal existed long before that decade. Many naturally occuring objects, such as trees, coastlines or clouds, are now considered to have fractal properties; and much of the current interest in the topic stems from the attempts to simulate such natural phenomena using computer graphics. A Simple Explanation Of Fractal Geometry While the classical Euclidean geometry works with objects which exist in integer dimensions, fractal geometry deals with objects in non-integer dimensions.

The world as we know it is made up of objects which exist in integer dimensions, single dimensional points, one dimensional lines and curves, two dimension plane figures like circles and squares, and three dimensional solid objects such as spheres and cubes. Figure 1. Figure 2. What Are Fractals? Part A: John The Ripper Hash Formats. John the Ripper is a favourite password cracking tool of many pentesters. There is plenty of documentation about its command line options. I’ve encountered the following problems using John the Ripper.

These are not problems with the tool itself, but inherent problems with pentesting and password cracking in general. Sometimes I stumble across hashes on a pentest, but don’t recognise the format, don’t know if it’s supported by john, or whether there are multiple “–format” options I should try.The hashes you collect on a pentest sometimes need munging into a different format… but what’s the format john is expecting? John will occasionally recognise your hashes as the wrong type (e.g. These problems can all be sorted with a bit of googling or grepping through the john source code. In the first release of this page I’ve: I haven’t yet done the following: Added reminders on how hashes can be collected.Added information on how to munge the hashes into a format supported by john. bfegg – Eggdrop. John the Ripper. The program john (or ‘John the Ripper’, abbreviated JtR) is a program by Solar Designer (Alexander Peslyak) that attempts to retrieve cleartext passwords, given hashes. 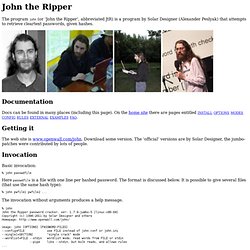 Documentation Docs can be found in many places (including this page). On the home site there are pages entitled INSTALLOPTIONSMODESCONFIGRULESEXTERNALEXAMPLESFAQ. Getting it The web site is www.openwall.com/john. Invocation Basic invocation: % john passwdfile Here passwdfile is a file with one line per hashed password. . % john pwfile1 pwfile2 ... Crypto-js - JavaScript implementations of standard and secure cryptographic algorithms. CryptoJS is a growing collection of standard and secure cryptographic algorithms implemented in JavaScript using best practices and patterns. 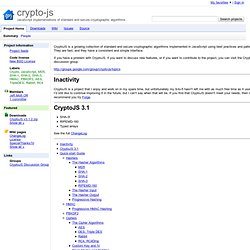 They are fast, and they have a consistent and simple interface. If you have a problem with CryptoJS, if you want to discuss new features, or if you want to contribute to the project, you can visit the CryptoJS discussion group. CryptoJS is a project that I enjoy and work on in my spare time, but unfortunately my 9-to-5 hasn't left me with as much free time as it used to. I'd still like to continue improving it in the future, but I can't say when that will be. If you find that CryptoJS doesn't meet your needs, then I'd recommend you try Forge. SHA-3!