Gpg4win - Secure email and file encryption with GnuPG for Windows 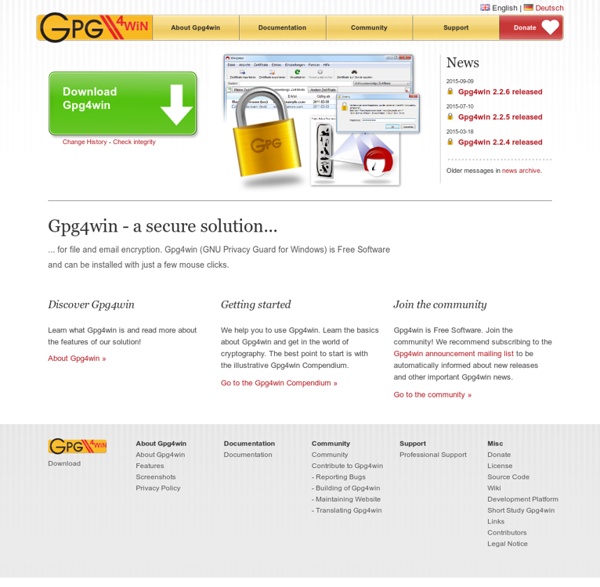 htshells - Just Another Hacker htshells is a series of web based attacks based around the .htaccess files. Most of the attacks are centered around two attack categories. Remote code/command execution and information disclosure. These attacks are intended for use during penetration tests or security assessments. It was created to get shell in a CMS that restricted uploads based on extension and placed each uploaded file in it's own directory. USAGEPick the attack you wish to perform, copy the file to a new file named .htaccess and upload the file to the web server. DOCUMENTATIONSee the project README file and the frequently asked questions. DOWNLOADYou can download the files from the github project page.

The GNU Privacy Guard The GNU Privacy Guard Cryptographie : Pourquoi, comment ? Gamja : Web vulnerability scanner | Download Gamja : Web vulnerability scanner software for free encreep.com - user friendly public-key cryptography Matrix - Who is Edward Snowden? (NaturalNews) This article is a compilation of a number of pieces I've written about Ed Snowden and the NSA. It doesn't replace them, but it hits the high points... Let's begin here: If you absolutely must have a hero, watch Superman movies. If your need for a hero is so great, so cloying, so heavy, so juicy that it swamps your curiosity, don't read this. If you can't separate Snowden's minor revelations from the question of who he is, if you can't entertain the notion that covert ops and intelligence-agency games are reeking with cover stories, false trails, and limited hangouts, you need more fun in your life. NSA? Okay. Is the Pope Catholic? In 2003, at age 19, without a high school diploma, Snowden enlists in the Army. Snowden breaks both legs in an exercise. If he was accepted in the Special Forces training program because he had special computer skills, then why discharge him simply because he broke both legs? Snowden shifts jobs. In 2007, Snowden is sent to Geneva. "Let's see. No.