The proof that we are soulmates 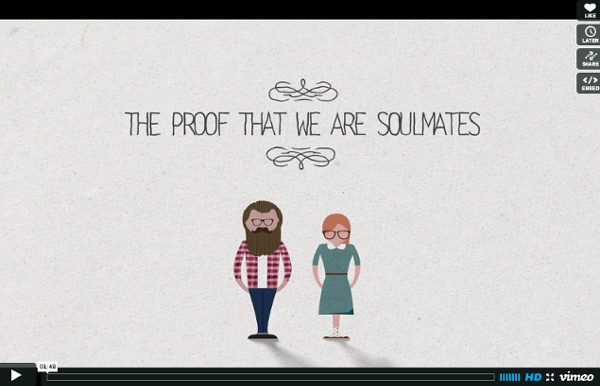 Years – Bartholomäus Traubeck A record player that plays slices of wood. Year ring data is translated into music, 2011. Modified turntable, computer, vvvv, camera, acrylic glass, veneer, approx. 90x50x50 cm. A tree’s year rings are analysed for their strength, thickness and rate of growth. This data serves as basis for a generative process that outputs piano music. It is mapped to a scale which is again defined by the overall appearance of the wood (ranging from dark to light and from strong texture to light texture). Years at Schmiede Hallein, 2011 A limited edition recording of ‘Years’ can be found here. Motor controls + engineering for Years v0.2 (not visible in the video) done by Christoph Freidhöfer.

YouTube's Nerdy Fiddlers Strike a Chord With Geeks | Underwire Violinist Lindsey Stirling's amazing Lord of the Rings medley follows her earlier YouTube hit based on themes from the Legend of Zelda videogame series.Theme from Chrono Trigger by Taylor, aka ViolinTay"Aerith's Theme" from Final Fantasy VII by Britaney, aka gbritaneyMedley from Super Mario Galaxy by Diwa de Leon, aka mangdiwsMedley from The Legend of Zelda by Lindsey Stirling, aka lindseystomp Instead of concertos by Beethoven or Bach, fleet-fingered young violinists are finding fame with a new repertoire — awesomely geeky performances of videogame themes and other nerd classics, uploaded to YouTube and viewed by millions. “Violin and piano are generally associated with classical music,” says the young Australian musician known on YouTube as lara6683, who has dressed up as the pink Power Ranger, Pokémon‘s Misty, Lara Croft and Sailor Moon in her video performances. “Some people consider this type of music, and these instruments, to be boring or snobby.