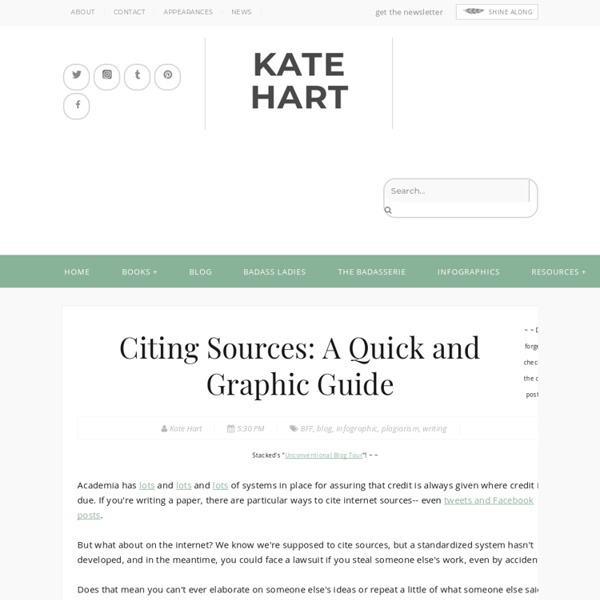 Academia has lots and lots and lots of systems in place for assuring that credit is always given where credit is due. If you're writing a paper, there are particular ways to cite internet sources-- even tweets and Facebook posts. But what about on the internet? We know we're supposed to cite sources, but a standardized system hasn't developed, and in the meantime, you could face a lawsuit if you steal someone else's work, even by accident. Does that mean you can't ever elaborate on someone else's ideas or repeat a little of what someone else said? Of course not. *click to expand As always, a couple of notes: - Because of space/design limitations, I didn't include an important guideline: Never repost someone's article in its entirety. - Remember that in addition to credits, citations are there to help others track down information they need. - Media and academic sites have their own in-house rules, and so should you. However.

Is Wikipedia a Trustworthy Academic Resource? Scientists Think So It might seem like common sense to exclude Wikipedia from the list of great science resources, but researchers at the Massachusetts Institute of Technology would like you to reconsider that notion. A team of researchers from MIT and the University of Pittsburgh asked chemistry graduate students to flex their writing skills and create new Wikipedia articles on scientific topics that were missing from the site, eCampus News reports. The new scientific Wikipedia articles received thousands of views per month, including many from researchers writing scientific literature. eCampus News reports that the researchers found Wikipedia to be influencing one word in every 300 in typical scientific articles. “Our research shows that scientists are using Wikipedia and it is influencing how they write about the science that they are doing,” Neil Thompson, an assistant professor of innovation and strategy at MIT’s Sloan School of Management, tells eCampus News.

Pixar's 20+ Rules on Storytelling for Teachers and Students A week ago I posted here in Educational Technology and Mobile Learning a poster made by Pixar in which they featured 22 rules on storytelling and it was really so informative reading all the feedback you sent me , however, today I woke up to an email from a colleague of mine teaching in the State in which he shared with me the graphic below. I was really surprised because at the time I published the first poster on Pixar rules of storytelling I did not know that such a graphic exists and going through it I found it way better than the one I initially posted earlier . I mean better in terms of layout and organization of its content. Have a look at it below and let us know what you think of it.

8 Resources for Preventing and Detecting Plagiarism This morning in a workshop that I facilitated with Greg Kulowiec there was a great discussion about copyright, Creative Commons, and fair use as it relates to using media in iBooks Author. During that conversation, Common Craft's explanation of Creative Commons was helpful. Later in the day I had a conversation with a couple of teachers who were also concerned about students plagiarizing work when constructing iBooks. That conversation prompted me to dig up some resources fore teaching students what plagiarism is, how to avoid it, and how to detect it. Plagiarism in Pop Culture: Coco Coco is a 2017 film animated film by Pixar Studios that achieved both critical and commercial success. It won two Academy Awards, including Best Animated Feature, and became the 15th highest-grossing animated film of all time. Inspired by the Mexican Day of the Dead celebrations, which are ongoing as this is post is published, the film tapped into themes of family, culture and destiny to tell a story that connected with audiences around the globe. However, the film had one theme that wasn’t widely reported: Plagiarism.

A Non-Freaked Out, Focused Approach to the Common Core CCSS Implementation Tip: When folks start to freak out about the CCSS, go to the Grand Canyon. (That’s me on the left.) When I set out in June 2012 to blog through the Common Core State Standards (CCSS), I was, as long-time readers know, a diehard standards avoider. To me, standards were nothing more than codified wish lists created by committee. They were useful for getting good grades on School of Ed lesson plans, and that was the extent of their value. But as I worked my way through each standard during Summer 2012, I began to sense that, even though there are only 32 “anchor” standards in the entire CCSS Literacy document, there are actually way fewer that need to be taught in an in-depth fashion.

To tackle student cheating, we need to reimagine university assessment Ghost-writing academic work is nothing new but until relatively recently it was out of reach of most students. Now essay mills have started rolling on an industrial scale. Their sophisticated websites offer production of a whole range of assignments up to and including dissertations and theses. If required, a typical undergraduate essay, on pretty much any topic, can be turned around in less than 24 hours. They have become so normalised that last month, a BBC investigation uncovered YouTube stars being paid to promote an academic cheating website based in the Ukraine, in videos with more than 700m views. This is an international business, with writers ranging from undergraduate students through to academics lining up to bid to write the assignment for the prospective client at prices often well below £100.

The Great Gatsby: Book Versus Movie 'Gatsby' obsessive Jon Reiner analyzes the liberties that Baz Luhrmann takes in adapting the novel—what he gets right and what he gets wrong. “Can’t repeat the past? Why of course you can,” urges Leonardo DiCaprio as Jay Gatsby in Baz Luhrmann’s high-octane adaptation of F. Scott Fitzgerald’s The Great Gatsby, which opens today after a worrisome stutter step and both fevered and dreaded anticipation. The famous line, which in the novel breaks the code on Gatsby’s “twilight universe” and portends his doom, illuminates the screen with a cautionary subtext Fitzgerald didn’t intend: Please Baz, don’t you do it! Repeating the lifeless moviemaking past of this masterpiece would again give the world something far less than great.

Why Use Sources? § Harvard Guide to Using Sources College writing assignments generally ask you to respond in some way to sources. Some assignments will require you to consult only sources assigned in class, while others will require you to locate your own sources relevant to a specific research topic. In many of your courses, your research will focus primarily on written texts such as books and scholarly articles, but you may also be asked to consult a variety of other sources, including letters, diaries, films, works of art, data from experiments, numerical data, surveys, and transcripts of interviews. A Very Good Web Annotating Tool for Research Students and Teachers March 16, 2017 Lumio is an excellent tool to use for bookmarking, curating, and clipping web content. Students can use it to highlight interesting content in a webpage, add notes to it and save it for a later access. Highlights are recorded together with source information so students can easily check back and cite source pages.

The Great Gatsby - review Link to video: The Great Gatsby: watch the trailer F Scott Fitzgerald 's classic, complex novella of bad timing and lost love in the Jazz Age has been brought once again to the cinema, now starring Leonardo DiCaprio as the enigmatic young plutocrat Gatsby himself; Carey Mulligan as Daisy, the object of his passion, and Tobey Maguire as Daisy's cousin Nick, the outsider-insider through whose wondering narration the story is filtered. Having watched this fantastically unthinking and heavy-handed adaptation, the opening gala of this year's Cannes festival, I feel the only way to make it less subtle would be to let Michael Bay direct it. As it is, the task has fallen to Baz Luhrmann , the director of Moulin Rouge! and Australia , a man who can't see a nuance without calling security for it to be thrown off his set. With literary adaptations, part of the fascination generally lies in seeing how the director has read the source material, perhaps with some new interpretation.