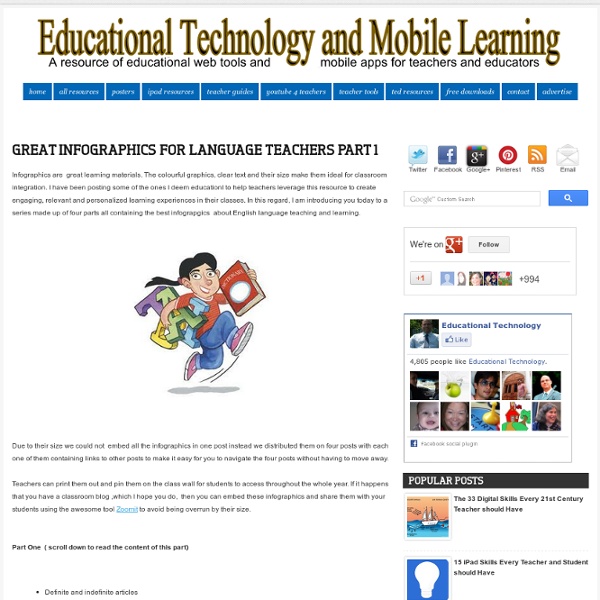 Infographics are great learning materials. The colourful graphics, clear text and their size make them ideal for classroom integration. I have been posting some of the ones I deem educationl to help teachers leverage this resource to create engaging, relevant and personalized learning experiences in their classes. In this regard, I am introducing you today to a series made up of four parts all containing the best infograpgics about English language teaching and learning. Due to their size we could not embed all the infographics in one post instead we distributed them on four posts with each one of them containing links to other posts to make it easy for you to navigate the four posts without having to move away. Teachers can print them out and pin them on the class wall for students to access throughout the whole year. Part One ( scroll down to read the content of this part) Definite and indefinite articlesAll about AdjectivesPunctuation Passive VoiceWhen to use e.g and i.e Part One

Native American Indian Tribes: Federally Recognized Tribes This page not only lists all the federally recognized tribes of Native Americans, but also has links from those tribes for their official websites, stories and legends, books, photographs and artwork. This is a work very much in progress and will take a long while to complete [unless you all help with this resource]. Right now I have links to over 150 website locations from about 26 different tribes on this page. I will try to add comprehensive links to an additional one or two tribes each month (moon). Latest Update: Southern Ute lndian Tribe of the Southern Ute Reservation, Colorado; 2 December, 2004

Film Links Until quite recently it was difficult to find pedagogically sound film material to help students improve their language through watching film, and teachers had to spend many hours creating their own materials. However, with the advent of the Internet there are now a wealth of online resources for both language teachers and their students. With so many resources it’s sometimes difficult for teachers to see the wood for the trees. Here I’m going to recommend the sites and resources that from my own experience I have found most useful and engaging. Lesson plans

United Kingdom HISTORY The first Britons (people who live in the United Kingdom) were the Picts, who arrived about 10,000 years ago. In the eighth century B.C., the Celts arrived from Europe and pushed the Picts north into Scotland. In A.D. 43, the Romans invaded and ruled for nearly 400 years. They built roads, bathhouses, sewers, and large villas.

The World's Most Efficient Languages Just as fish presumably don’t know they’re wet, many English speakers don’t know that the way their language works is just one of endless ways it could have come out. It’s easy to think that what one’s native language puts words to, and how, reflects the fundamentals of reality. But languages are strikingly different in the level of detail they require a speaker to provide in order to put a sentence together.