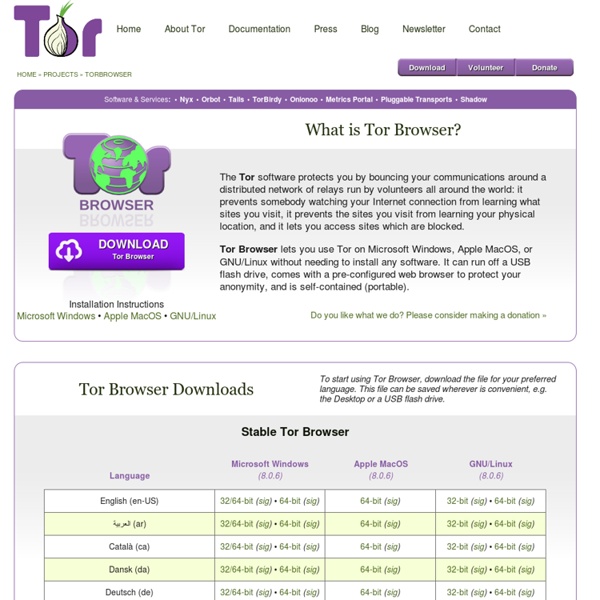 Download the file above, and save it somewhere, then double click on it. (1) Click "Run" then choose the installer's language and click OK (2). Make sure you have at least 80MB of free disk space in the location you select. If you want to leave the bundle on the computer, saving it to the Desktop is a good choice. If you want to move it to a different computer or limit the traces you leave behind, save it to a USB disk. Click Install (3) Wait until the installer finishes. This may take a few minutes to complete. Once the installation is complete, click Finish to launch Tor Browser's wizard. Once you see Tor Browser's wizard click Connect Alternatively, you can launch Tor Browser by going to the folder Tor Browser which can be found at the location you saved the bundle at (Default: Desktop) and double click on the Start Tor Browser application. Once Tor is ready, Tor Browser will automatically be opened. Once you are finished browsing, close any open Tor Browser windows by clicking on the

Is Apple's HomePod Always Listening to You? If you've ever had that uncanny moment where you mention a brand out loud and then see an ad for it on social media hours later, you may be a little suspicious any mics in earshot already. It's happened to me at least a half-dozen times, each time a different brand. Maybe it's coincidence! But even if the eavesdropping isn't happening, it certainly could happen. Facebook and Google and Amazon swear up and down they are not doing this, but it wouldn't be impossible. Fake Your GPS Location on Android to Trick Apps & Targeted Ads « LG G3 You wouldn't send your GPS coordinates to a completely random stranger just because he or she asked you for it, right? So why are you constantly sharing your location (and other data) to apps on a daily basis? While there are many apps that need your location in order to function properly (e.g., Google Maps, Waze, Yelp, Uber), others will use it for more nefarious reasons, like to "better provide" you with targeted ads.

Overview Overview The Tor network is a group of volunteer-operated servers that allows people to improve their privacy and security on the Internet. Tor's users employ this network by connecting through a series of virtual tunnels rather than making a direct connection, thus allowing both organizations and individuals to share information over public networks without compromising their privacy. Tor Warnings Tor Browser Version 4.0.2 - Windows 8, 7, Vista, and XP Everything you need to safely browse the Internet. Learn more » ZeroN - Jinha Lee MIT Media Lab Levitated Interaction Element - published at ACM UIST 2011. Jinha Lee and Rehmi Post Advisor: Hiroshi Ishii I think there is something fundamental behind motivations to liberate physical matter from gravity and enable control. The motivation has existed as a shared dream amongst humans for millennia.

Choose better passwords with the help of science August 30, 2017 11.32am BST For years, computer users have been told they should have complicated passwords, including numbers, punctuation marks and other symbols, and upper- and lowercase letters. Despite those being hard to remember, people were told not to write their passwords down, and forced to make up new ones quite frequently. Users dutifully complied – by capitalizing the first letter of their passwords, adding a “1” or their birth year, or perhaps ending their password with an exclamation point.

How to hide user ID and location while on the 'net? Some VPNs offer various ways of routing other traffic though a VPN such SSL or SSH Tunnels and the SOCKS proxy. Also if you combine the VPN with TORs seamless proxy then all non VPN traffic will be routed though TOR. Tor is limited mostly to TCP traffic, with the exception of allowing UDP traffic for the DNS requests. Streamline Your Site With Personalization Web sites want to maximize engagement, but it’s hard to guess what each visitor will want to read or buy. Pixels are cheap, so many sites approach this question by adding widget after widget, hoping that a user will find one they want to click on. This is the shotgun approach to boosting engagement. Wine Binary Downloads Supported Wine This endorsement is the primary recognition that CodeWeavers has requested in exchange for hosting the Wine web site. Wine Binary Downloads Binary packages are built and maintained by the distros, and may contain patches that are not supported here. The links below are provided solely as a convenience to users and do not represent an endorsement.

Training Cells to Perform Boolean Functions? It's Logical - 05/29/2012 When either FRB and FKBP or GID1 and GAI linked up, the cell’s membrane developed ruffles easily visible under a microscope. Inoue lab Johns Hopkins scientists have engineered cells that behave like AND and OR Boolean logic gates, producing an output based on one or more unique inputs. This feat, published in the May issue of Nature Chemical Biology, could eventually help researchers create computers that use cells as tiny circuits. Study leader Takanari Inoue, Ph.D., an assistant professor in the Department of Cell Biology and member of the Institute of Basic Biomedical Sciences’ Center for Cell Dynamics at the Johns Hopkins University School of Medicine, explains that many researchers are striving to mimic devices in everyday use by engineering new qualities into biological materials, including biomolecules and cells. Several of those engaged in this relatively new field, known as synthetic biology, have tried to create biological computers.

Edward Snowden’s new app turns any Android phone into a surveillance system NSA Whistleblower Edward Snowden is among the backers of a new surveillance app that helps guard against computer hijackings. Haven is an open source app that will run on any Android phone, particularly inexpensive and older devices. It operates like a surveillance system, using the device’s camera, audio recording capability and even accelerometer to detect movement and notify a user. The idea is that, even with the best encryption in the world, a device is vulnerability to physical, in-person tampering — also known as “evil maid” because literally a hotel maid could access it. The app was developed by The Guardian Project, Freedom Of The Press and Snowden to offer eyes and ears to prevent, or at least increase awareness, of whether a device has been tampered with.

United Kingdom: Surveillance Activity by UK Intelligence Agencies Ruled Unlawful (Dec. 8, 2016) The Investigatory Powers Tribunal ruled on October 17, 2016, that the British Intelligence Agencies unlawfully collected the confidential personal data of British citizens in bulk for 17 years, from 1998 to 2015, when the activities were publicly acknowledged. (Privacy International v. Secretary of State for Foreign and Commonwealth Affairs, [2016] UKIPTrib 15_110-CH.) The ruling was declared “one of the most significant indictments of the secret use of the government’s mass surveillance powers since Edward Snowden first began exposing the extent of British and American state digital surveillance of citizens in 2013.” (Alan Travis, UK Security Agencies Unlawfully Collected Data for 17 Years, Court Rules, GUARDIAN ( Oct. 17, 2016).)