Long Game: Digital Rights w/ John Robb. How to Live Without Google: Alternatives That Protect Your Privacy. Remove Google from your life? 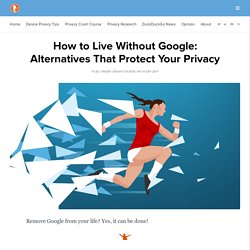 Yes, it can be done! Google trackers have been found on 75% of the top million websites. This means they are not only tracking what you search for, they're also tracking which websites you visit, and using all your data for ads that follow you around the Internet. Your personal data can also be subpoenaed by lawyers, including for civil cases like divorce. Google answered over 150,000 such data requests in 2019 alone! More and more people are also realizing the risk of relying on one company for so many personal services. Mission Darkness - About Us Page – MOS Equipment. The Mission Darkness™ brand is brought to you by MOS Equipment. 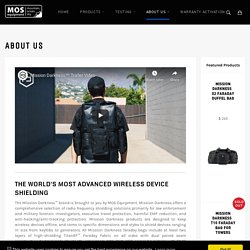 The faraday fabric and electronic devices inside are protected by a durable water-resistant outer layer. The Features Which Make Signal The Most Secure Messaging App In Existence. When I first started using the Internet almost 20 years ago, there were many instant messaging options available. 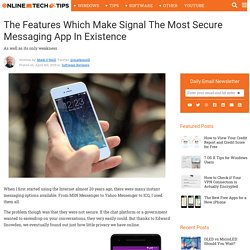 From MSN Messenger to Yahoo Messenger to ICQ, I used them all. The problem though was that they were not secure. If the chat platform or a government wanted to eavesdrop on your conversations, they very easily could. Welcome to searx — Searx Documentation (Searx-0.17.0.tex) How to Avoid Surveillance...With Your Phone. The truth about Virtual Private Networks - Should you use a VPN? HOW TO RESTORE YOUR YOUTUBE CHANNEL AFTER TERMINATION FROM FALSE COPYRIGHT CLAIMS. If you’re a video maker on youtube, at some point (most likely) you’ve ran into the threat of false flagging your videos down, or the actual act was done to you by some anonymous person. 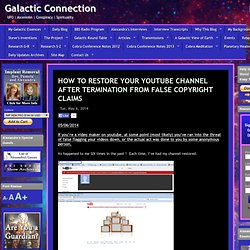 Its happened to me SIX times in the past ! Each time, I’ve had my channel restored. We all know the flagging process is abused, and flawed — and leads to channels being flagged down by “fake” people, such as “Daffy Duck” , dead people like River Phoenix , and Randy Savage. Clearly false claims , which are approved through the automatic (and obviously flawed / broken ) flagging system on youtube. The 3 rules of a secure cell phone. Big brother is coming after your phone. 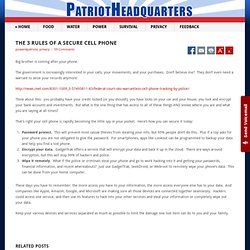 The government is increasingly interested in your calls, your movements, and your purchases. Don’t believe me? They don’t even need a warrant to seize your records anymore: Think about this: you probably have your credit locked (or you should!) ; you have locks on your car and your house; you lock and encrypt your bank accounts and investments. That’s right your cell phone is rapidly becoming the little spy in your pocket. Password protect. How to protect your Facebook account from Rogue Applications. A rogue application is a Facebook application developed by someone with fraudulent or deceitful intentions. 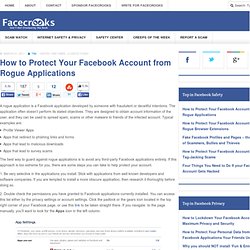 The application often doesn’t perform its stated objectives. They are designed to obtain account information of the user, and they can be used to spread spam, scams or other malware to friends of the infected account. Typical examples are: Privnote - Send notes that will self-destruct after being read. How to protect yourself from FBI webcam spying. How to be anonymous on the web? Tor, Dark net, Whonix, Tails, Linux. How To Stop People From Snooping On You With Facebook's Graph Search. On Monday, Facebook officially rolled out Graph Search to everyone on the social network. 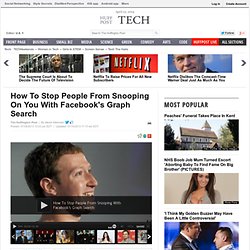 The new search engine, originally accessible to only a select group after its introduction in March, lets you search through the mountains of information the site's more than 1 billion members produce daily. Starting this week, everyone with a Facebook account can find "friends from London who like 'True Blood' " or "married people who like prostitutes. " In Facebook's attempt to connect friends and friends of friends to one another, your information, now fed into a search engine, is more public than ever before. Edward Snowden: Here's how we take back the Internet. Published on Mar 18, 2014 Appearing by telepresence robot, Edward Snowden speaks at TED2014 about surveillance and Internet freedom. 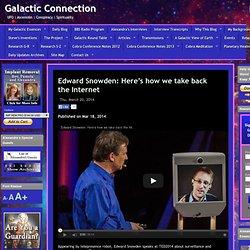 The right to data privacy, he suggests, is not a partisan issue, but requires a fundamental rethink of the role of the internet in our lives — and the laws that protect it. “Your rights matter,” he say, “because you never know when you’re going to need them.” Chris Anderson interviews, with special guest Tim Berners-Lee. TEDTalks is a daily video podcast of the best talks and performances from the TED Conference, where the world’s leading thinkers and doers give the talk of their lives in 18 minutes (or less). Like this: Shake internet trackers in 4 steps. Their spies are literally everywhere you look. 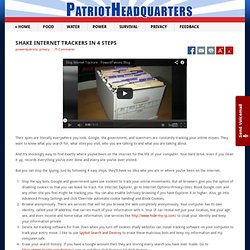 Google, the government, and scammers are constantly tracking your online moves. How to Encrypt Your Email and Keep Your Conversations Private. 5 Fast Steps to Ensure Online Privacy. Health Preppers Food & Nutrition Privacy Energy. 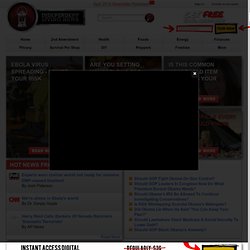 How to Keep the NSA Out of Your Computer. John Hersey Editor's note: Clive Thompson answered readers' questions about this article on Reddit on Aug. 28. Click here to view the conversation. JOSEPH BONICIOLI mostly uses the same internet you and I do. How to Disappear Online (w/Infographic) Activist Post Social media has made everyone’s life an open book (one that’s open a bit too far in some cases). As more and more companies and individuals come to rely on the Internet as a primary source of information about others, so too does the possibility of compromising info reaching the wrong person. For folks concerned about their personal information potentially costing them jobs and relationships, or for those dealing with the harsh realities of social media fallout, the decision to “pull the plug” is an increasingly attractive one. And while it might seem impossible to keep your private life private and your Internet presence to a minimum in a 24/7 connected world, the truth is you can disappear online with a little effort and dedication.

The infographic below illustrates some steps that can be taken. FigLeaf App. How to hide user ID and location while on the 'net? Some VPNs offer various ways of routing other traffic though a VPN such SSL or SSH Tunnels and the SOCKS proxy. Also if you combine the VPN with TORs seamless proxy then all non VPN traffic will be routed though TOR. Tor is limited mostly to TCP traffic, with the exception of allowing UDP traffic for the DNS requests. However it is possible to tunnel through tor with other protocols. for example you could tunnel through to a VPS server with onioncat. This would only be useful if one was able to anonymously buy and configure the VPS server.

Another TIP. firefox/seamonkey disables onion DNS lookups by default. For best security use the TOR browser as it runs every request through a separate TOR circuit. Google Alternatives: Escape The Monster & Secure Your Online Privacy. 3 Ways To Protect And Secure Your Online Identity. Brave Browser Protects Privacy and Rewards Content Creators. Tor Browser. Download the file above, and save it somewhere, then double click on it. (1) Click "Run" then choose the installer's language and click OK (2).

Make sure you have at least 80MB of free disk space in the location you select. If you want to leave the bundle on the computer, saving it to the Desktop is a good choice. VirtualShield - You have the right to remain private. Fake Your GPS Location on Android to Trick Apps & Targeted Ads « LG G3. You wouldn't send your GPS coordinates to a completely random stranger just because he or she asked you for it, right?

So why are you constantly sharing your location (and other data) to apps on a daily basis? While there are many apps that need your location in order to function properly (e.g., Google Maps, Waze, Yelp, Uber), others will use it for more nefarious reasons, like to "better provide" you with targeted ads. This is where spoofing your location comes in handy. Plus, using a spoofed location will let you check in to places on Facebook when you're not there and can help you add pics to your Photo Map in Instagram, among other things. Best of all, it's so easy any Android user can do it.

Step 1Enable Developer Options Before you get the app that works all of this magic, you'll need to enable the "Developer options" in your Android's settings. Step 2Enable Mock Locations Step 3Install a Location-Spoofing App. NSA Surveillance and What To Do About It. United Kingdom: Surveillance Activity by UK Intelligence Agencies Ruled Unlawful. (Dec. 8, 2016) The Investigatory Powers Tribunal ruled on October 17, 2016, that the British Intelligence Agencies unlawfully collected the confidential personal data of British citizens in bulk for 17 years, from 1998 to 2015, when the activities were publicly acknowledged. (Privacy International v.

Secretary of State for Foreign and Commonwealth Affairs, [2016] UKIPTrib 15_110-CH.) The ruling was declared “one of the most significant indictments of the secret use of the government’s mass surveillance powers since Edward Snowden first began exposing the extent of British and American state digital surveillance of citizens in 2013.” (Alan Travis, UK Security Agencies Unlawfully Collected Data for 17 Years, Court Rules, GUARDIAN ( Oct. 17, 2016).) The data collected included phone and Internet traffic and communications data.

Particulars of the Case The Ruling. How to Encrypt Your Email and Keep Your Conversations Private. Detekt: A New Malware Detection Tool That Can Expose Illegitimate State Surveillance. Eva GalperinElectronic Frontier Foundation Recent years have seen a boom in the adoption of surveillance technology by governments around the world, including spyware that provides its purchasers the unchecked ability to target remote Internet users' computers, to read their personal emails, listen in on private audio calls, record keystrokes and passwords, and remotely activate their computer’s camera or microphone. EFF, together with Amnesty International, Digitale Gesellschaft, and Privacy International have all had experience assisting journalists and activists who have faced the illegitimate use of such software in defiance of accepted international human rights law.

Software like this is designed to evade detection by its victims. How to determine if YOUR COMPUTER is being watched by the FBI. Mozilla Advocacy.