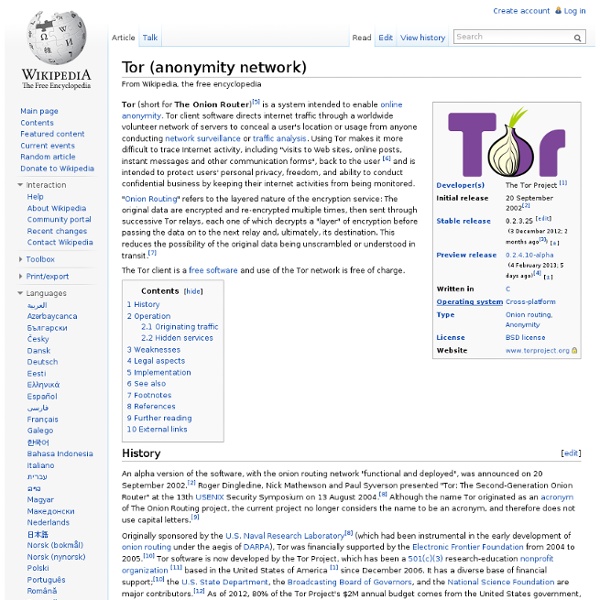 Tor (previously an acronym for The Onion Router)[4] is free software for enabling online anonymity and censorship resistance. Tor directs Internet traffic through a free, worldwide, volunteer network consisting of more than five thousand relays[5] to conceal a user's location or usage from anyone conducting network surveillance or traffic analysis. Using Tor makes it more difficult to trace Internet activity, including "visits to Web sites, online posts, instant messages, and other communication forms", back to the user[6] and is intended to protect the personal privacy of users, as well as their freedom and ability to conduct confidential business by keeping their internet activities from being monitored. An extract of a Top Secret appraisal by the NSA characterized Tor as "the King of high secure, low latency Internet anonymity" with "no contenders for the throne in waiting".[7] Alice's Tor client picks a random path to destination server Steven J.

ARK - The Next Generation Portable Wireless Charger by BEZALEL Corp. ARK is the next generation of wireless phone charging. ARK charges your cellphones at any time; any place, and most importantly, it is 100% cord free ---- which will make your life easier than ever before. ARK is extremely easy to use, stable, reliable, and fits into your everyday life. ARK is the result of our efforts to make life simpler. U.S. Underwrites Internet Detour Around Censors Abroad The effort includes secretive projects to create independent cellphone networks inside foreign countries, as well as one operation out of a spy novel in a fifth-floor shop on L Street in Washington, where a group of young entrepreneurs who look as if they could be in a garage band are fitting deceptively innocent-looking hardware into a prototype “Internet in a suitcase.” Financed with a $2 million State Department grant, the suitcase could be secreted across a border and quickly set up to allow wireless communication over a wide area with a link to the global Internet. The American effort, revealed in dozens of interviews, planning documents and classified diplomatic cables obtained by The New York Times, ranges in scale, cost and sophistication.

Usenet A diagram of Usenet servers and clients. The blue, green, and red dots on the servers represent the groups they carry. Arrows between servers indicate newsgroup group exchanges (feeds). Arrows between clients and servers indicate that a user is subscribed to a certain group and reads or submits articles. BlackSquare Enigma - Patented USB Encryption Device BlackSquare Enigma is a patented, USB hardware data encryption device. If you have data you need to protect, you should own an Enigma! Using BlackSquare Enigma, no one can decrypt your confidential data - EVER! Every so often, a truly compelling and innovative product comes along that disrupts traditional technology in a positive way. BlackSquare Technologies Enigma is one of these products.

Online Cash Bitcoin Could Challenge Governments, Banks Late last year, after WikiLeaks began releasing its trove of State Department cables, many individuals sought to show solidarity with the group by making a donation. They found, however, that many payment processors would not remit money to WikiLeaks, some say as a result of U.S. government pressure. PayPal even froze the group’s account so it couldn’t access funds already collected. “Hey, Visa, Mastercard, Paypal: It’s MY money,” media critic Jeff Jarvis tweeted at the time. “How DARE you tell me where I can and can’t spend it?” Is Usenet Safer than BitTorrent? Shhh... Stick to bittorrent kid. Usenets the devil and I highly recommend against it.

DDNS – Free Dynamic DNS Providers We maintain the #1 list of Dynamic DNS (DDNS) providers online. Dynamic DNS is a method that allows you to notify a Domain Name Server (DNS) to change in your active DNS configuration on a device such as a router or computer of its configured hostname and address. It is most useful when your computer or network obtains a new IP address lease and you would like to dynamically associate a hostname with that address, without having to manually enter the change every time. The Bitcoin Bubble My friend Jerry Brito is one of the best-connected and most insightful observers of the Internet I know, so when he starts talking up an Internet trend , I pay attention. But after reading his case for Bitcoin, a new digital currency, I remain a skeptic. The article is worth reading in full, but here’s an important part of his case for Bitcoin: The web has also seen all-purpose digital currencies, from defunct dot-com bubble start-ups Flooz and Beenz, to the slightly more successful e-gold.

I2P The software is free and open source and is published under multiple licenses. The name I2P is derived from Invisible Internet Project, which, in pseudo-mathematical notation, is represented as I²P. Technical design[edit]