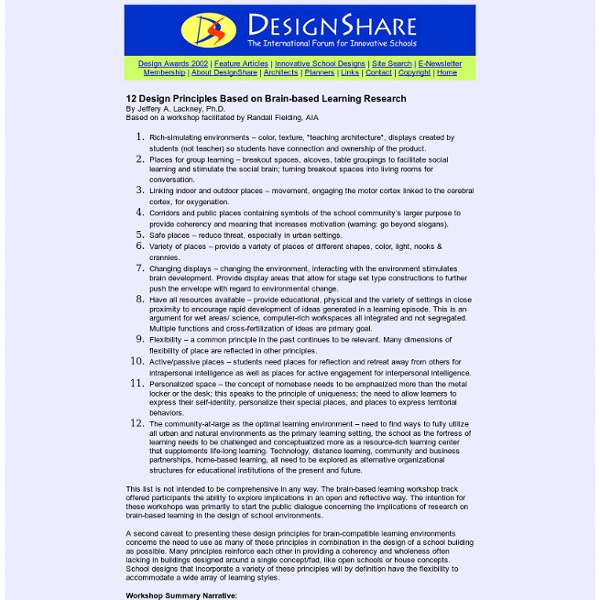 12 Design Principles Based on Brain-based Learning Research By Jeffery A. Lackney, Ph.D. Based on a workshop facilitated by Randall Fielding, AIA Rich-simulating environments – color, texture, "teaching architecture", displays created by students (not teacher) so students have connection and ownership of the product. This list is not intended to be comprehensive in any way. A second caveat to presenting these design principles for brain-compatible learning environments concerns the need to use as many of these principles in combination in the design of a school building as possible. Workshop Summary Narrative: The objectives of the brain-based workshop track of the CEFPI Midwest Regional Conference were to: (a) understand the latest developments and findings from brain research; (b) discuss how these findings may educational curriculum and instruction for learning; and (c) explore what the implications these findings may have on school design. www.designshare.com

Ten things learned on my leadership journey | John Dunford Consulting 1. Be creative Dream your dreams and go into school the next day and put them into action. Although many people complain about the pressures of accountability – with some justification – there is still plenty of space for creativity in school leadership. Being creative does not necessarily mean thinking of original ideas. Creativity and innovation can come through using ideas from elsewhere and adapting them to the context of your own school. 2. When I was appointed as a head, I told the appointment committee that it was my job to water the plants. But, as in the garden, not all the human plants need the same amount of water and nurturing. 3. School leaders are part of a great movement to increase the life chances of young people by raising their aspirations and achievement. Of course, all school leaders want their school to be the best and work long hours towards that admirable goal, but this should not be at the expense of other schools. 4. 5. 6. 7. 8. 9. 10. Like this: Like Loading...