It is possible to understand Engineers - Where there's a will, there's a way. 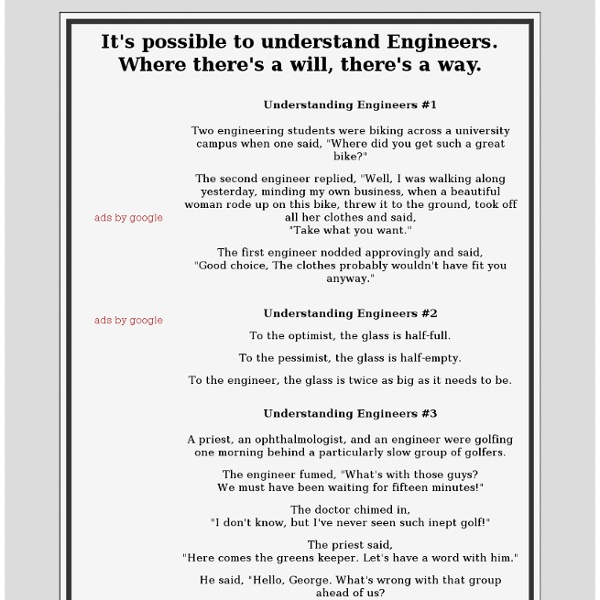 Understanding Engineers #1 Two engineering students were biking across a university campus when one said, "Where did you get such a great bike?" The second engineer replied, "Well, I was walking along yesterday, minding my own business, when a beautiful woman rode up on this bike, threw it to the ground, took off all her clothes and said, "Take what you want." The first engineer nodded approvingly and said, "Good choice, The clothes probably wouldn't have fit you anyway." Understanding Engineers #2 To the optimist, the glass is half-full. To the engineer, the glass is twice as big as it needs to be. Understanding Engineers #3 A priest, an ophthalmologist, and an engineer were golfing one morning behind a particularly slow group of golfers. The engineer fumed, "What's with those guys? The doctor chimed in,"I don't know, but I've never seen such inept golf!" The priest said, "Here comes the greens keeper. He said, "Hello, George. The greens keeper replied, "Oh, yes. They were silent for a moment.

Various quotations In From up North’s inspiration galleries we present the latest of our findings from the wonderful world of design. Amazing high quality artworks in various categories from great designers all over the globe. Quote by George Bernard Being happy… Sometimes I pretend to be normal… Bert Kreischer and His Pranks on Hotel Maids Standup comedian Bert Kreischer is a frequent traveler. He often has to check into hotels during his travels. Being a comedian, Bert has a terrific sense of humor that makes him pull a prank on the hotel maids. One man's soap nightmare This is so funny I actually cried when I read it. It's an exchange between a guy staying in a London hotel and the staff of the hotel. The letters were sent to The Sunday Times. World's First Hoverbike Unveiled! Australian inventor Chris Malloy has built a hoverbike from motorcycle parts and claims it can fly up to 173 mph, at an altitude of 10,000 feet. The designer says the one-person vehicle could replace conventional helicopters for tasks over rugged terrain, such as aerial surveys, search-and-rescue missions and cattle roundups. Along with two Tasmanian Oak propellers, the 240 pounds hoverbike has a 1,170cc 4-stroke engine and carbon-fiber driveshaft. To lift off, the driver increases thrust with the right hand via a throttle grip, exactly like that of a motorcycle. At 21.8 miles per gallon, one full tank of gas will take you 92 miles.

Revenge, Facebook Style: Brother 1, Sister 0 - StumbleUpon I’ve been laughing for the past 3 minutes about this. SoJones family, if your sibling gets on your very last nerve and you have some juicy blackmail material on them, what do you do? The picture below explains everything, but let me tell you what happened in short: Chris hides beer in his bedroom (we assume he’s underaged). Sister snitches on him. “asian parents are [f*ing] strict” as he explains, and they subsequently ground him for three months.

Quotes from Starbucks - Influential Mom Blogger, Parenting, Community 10K Amazing Shares Facebook 3 Pin It Share 7 7 Twitter 0 Google+ 12 StumbleUpon 10K Email -- Email to a friend 10K Amazing Shares × Wisdom from a cup of coffee….. Lost in Translation - Cross-language computer translation "Language is the source of misunderstandings." — Antoine de Saunt-Exupéry in The Little Prince Important: Systran, which for years provided our translation functionality, shut down their service in May. We're now using Google Translate. Material Science Madness: Crazy Metal Melts in Your Hand There is an incredible metal that shatters like glass, melts in a human hand, attacks other metals but is non-toxic to humans, and acts like an alien life form when exposed to sulfuric acid and dichromate solution. It sounds too amazing to be true, but gallium is an absolutely real chemical element that’s found in some of the gadgets we use every day. But perhaps more interestingly, there are a ton of insane experiments scientists like to do with gallium. Thanks to its odd properties and behavior, gallium can do some pretty strange things in the lab. The above video shows what happens when gallium “attacks” aluminum. The “gallium beating heart” experiment is a popular one that shows how gallium can act like a living thing when submerged in sulfuric acid and a dichromate solution.