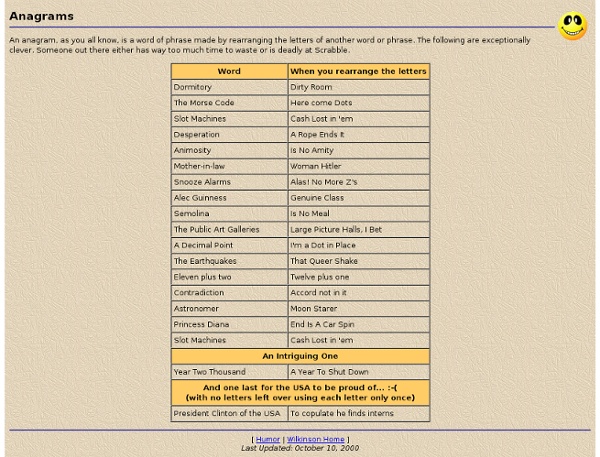 15 Creative Vodka Bottles « Vivid Underground Well fuck. This whole blog thing is kinda falling apart. Give it another go maybe? 7 Classic Disney Movies Based On R-Rated Stories Left on his own, Tarzan receives a telegram that reveals him as the rightful heir to Clayton's estate and all the property that comes with it (which includes Jane, because women are things). Instead of saying the word, kicking Clayton out of his own house and claiming Jane for tax purposes, he chooses to stay silent, thinking that Jane is happy being with Clayton. And... that's it. Graffiti from Pompeii I.10.4 (near the rear entrance vestibule of the House of Menander); 8356: At Nuceria, look for Novellia Primigenia near the Roman gate in the prostitute’s district. I.10.4 (exterior of the House of Menander); 8304: Satura was here on September 3rd I.10.7 (House and Office of Volusius Iuvencus; left of the door); 8364: Secundus says hello to his Prima, wherever she is. I ask, my mistress, that you love me.

Price Tag Fails Some of these might be innocent mistakes, but I imagine most of them are the result of bored workers. Alfred Hitchcock's Angry Birds Reimagined Posters Olie Moss isn't the only illustrator in town to give new things a retro makeover. Flickr user Zero-lives [flickr profile] came up with a couple of movie posters for Alfred Hitchcock's The Birds, reimagined in the motif of popular iPhone game, Angry Birds. Stories from around the web

SeenAndShared.com The Law Of The Wild says "Kill ONLY when you are hungry." Photographer Michel Denis-Huot, who captured these amazing pictures on safari in Kenya's Masai Mara in October last year, said he was astounded by what he saw: *UPDATE: While these pictures are indeed real, the outcome after the encounter below did not fare well for the young deer. Nevertheless, these are remarkable photographs.

Never Be My Friend When I'm bored, I browse through my friends' Facebook images, choose my favorites, and draw them. Sometimes I take... liberties. Let's just call it artistic license. Tempest Freerunning Academy Looks Like Real-Life Video Game Think of the Tempest Freerunning Academy as parkour meets video games. Unlike similar academies, this one comes with its very own Super Mario Bros. inspired area. Video after the break. [via Likecool - Gizmodo]

Do blind people hallucinate on LSD? I’ve just found a remarkable 1963 study [pdf] from the Archives of Opthalmology in which 24 blind participants took LSD to see if they could experience visual hallucinations. It turns out, they can, although this seems largely to be the case in blind people who had several years of sight to begin with, but who later lost their vision. Those blind from a very early age (younger than two years-old) did not report visual hallucinations, probably because they never had enough visual experience to shape a fully-functioning visual system when their brain was still developing. It is evident that a normal retina is not needed for the occurrence of LSD-induced visual experiences. Why Can't I Own a Canadian? October 2002 Dr. Laura Schlessinger is a radio personality who dispenses advice to people who call in to her radio show. Recently, she said that, as an observant Orthodox Jew, homosexuality is an abomination according to Leviticus 18:22 and cannot be condoned under any circumstance.

Legend of Zelda Treasure chest with sound! 1/4" Pine plywood. You can use whatever type of wood you want, but pine looks nice and is relatively cheap. You'll need enough wood to cut out the following pieces: Two 5.5" x 10.5" pieces One 8" x 10.5" base piece Two 8.5 x 5.5" pieces Five 2 7/16" x 11" slats Also you will need two 6 sided half a decagon pieces. This sounds confusing but I've included a template to cut these pieces out. Kurt Vonnegut at the Blackboard Voices in Time I want to share with you something I’ve learned. I’ll draw it on the blackboard behind me so you can follow more easily [draws a vertical line on the blackboard].

Wild Polar Bear vs Dogs Norbert Rosing took these images of a wild polar bear coming upon his tethered sled dogs in the wilds of Canada's Hudson Bay. The Polar Bear returned every night that week to play with the dogs. 5 Things to Do Every Day for Success Fast Company wants you to have your best year yet in 2012; click for more advice and tips on how to work smarter, manage your career, and lead a more meaningful life. "You get up at what time?" I hear that a lot, along with "You are so lucky." So, I'm going to help out here and let you in on the secrets of my success. Well, not all of them--but enough to show you the foundation I build on every day.