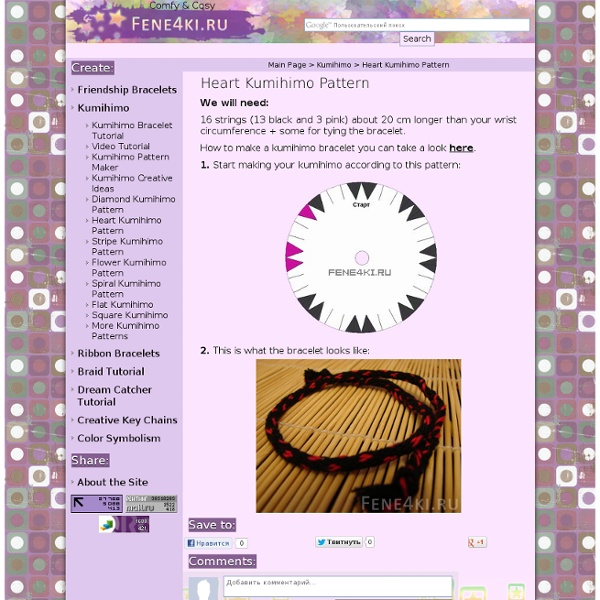 We will need: 16 strings (13 black and 3 pink) about 20 cm longer than your wrist circumference + some for tying the bracelet. How to make a kumihimo bracelet you can take a look here. 1. 2. Save to: Comments:

Flower Kumihimo Pattern. Friendship Bracelets. Bracelet Patterns. How to make bracelets We will need: 16 strings (9 blue, 6 orange and one red) about 20 cm longer than your wrist circumference + some for tying the bracelet. How to make a kumihimo bracelet you can take a look here. 1. Start making your kumihimo according to this pattern: 2. Save to: Comments: Japanese Braiding Instructins There are hundreds of different kumihimo stitches, some simple and some very complex, using different numbers of strands. A common stitch often taught to beginers is the simple 16-thread rotating stitch (Kongo Gumi). The pattern you get depends on how the strands are arranged at the start. In our directions, "strand" can be ribbon, yarn, fun/fancy fur or something else. Cutting your strands (ribbon, yarn, string, etc.) First determine the length you want to start with. As you hold the knot with one hand, with the other hand, arrange the strands, pulling them into the slots on the disc so they look similar to the picture above. Begin your braid. Take the lower left-hand strand and remove it from the slot, lift it straight up (not across) and put it in the slot directly above (to the left of the upper strands as illustrated in the picture above). Repeat steps 1-4 until finished (when your yarn or ribbon is too short to stay in the slot). Uses for Braids:

Kumihimo Bracelet Patterns. Friendship Bracelets. Bracelet Patterns. How to make bracelets Save to: Comments: First Kumihimo Braid I had a go at using this Kumihimo plate the other night and found that the instructional pictographs were a bit difficult to understand. As you can see they were a bit daunting. The Kumihimo package came with five strands of synthetic yarn to start you off, and this is the first braid I did. I enjoyed it so much that I pulled 60” of gold ribbon, purple orlec and navy orlec to braid. This is a close up of the braid. Accepting this award means following some rules:1. And pass the awards on to: Charlotte at Strikke-og vevebloggen Susan at Thrums Cindie at eweniquely ewe Deanna at A Winding Thread Trapunto at The Straight of the Goods Magic Stix FibersDeborahbee at Swifter Than a Weavers Shuttle My Days Have Passed Weaving WordsDuring the 13th century, a woman weaver was called a Webster.

How to Make a Spiral Kumihimo Braid Instructions by Michelle Wood, Jewelry-Making Expert, Exclusively for Fire Mountain Gems and Beads® In this style of braid, the numbers change position as the disc is turned in a counter-clockwise direction. The kumihimo disk has 32 numbered slots and 4 dots indicating North, East, South and West. To determine strand length needed, multiply desired finished length by 3. Example: If you want a 20-inch necklace, you will need 60 inches of cord. Hold the folded cord end firmly in place on the underside of the disc while setting up the face of the disc. With North at the top of the disc, you are ready to start your braid.

Kumihimo Project Kits | What a Knit and Kumihimo too! Kumihimo Project Kits September 12, 2011 at 8:47 pm Karen’s Kumihimo Corkscrew Bracelet Springy, bouncy and lots of fun, Karen’s Kumihimo Corkscrew Bracelet is quick, fun and easy to make. The possibilities are endless. You will learn a quick tip for measuring circumference, how to start with an “interlaced” end and braid around a core. This was one of our Kumihimo projects that we did in San Miguel de Allende and I thank my students for making me such great samples! You will Need: 6″ Kumihimo Disk (use a 6″ disk rather than a mini), 8 Bobbins, Measuring Tape, Needle & Heavy Duty Thread, Glue (I like WeldBond) and Scissors.You Should Know: Kumihimo Round Braid Kit includes: - 2 pkgs Satin Cord - 1 Corkscrew Wire with preformed tip & tail - Hammered Barrel Bead - Instructions with Photos - 10 Colors: Red & Dark Gray, Turquoise & Royal, Black & Silver, Peach & Caramel, Navy & Williamsburg Blue, Black & Coffee, Royal & Black, Black & Avocado, Teal & Caramel, Turquoise & Caramel Cost $14.50 P.S.

Tutorial [b]In this tutorial I will show you how to make a 4 string Kumihimo Rope (or round braid).[/b[ Kumihimo Disk 4 strings about 20 inches each I will use 4 different colors for this tutorial. Step 1 Set your strings up so that they are evenly spaced and opposite eachother. Step 2 Move your bottom string up (from 17 to 32) Step 3 Move your top string down (from 1 to 17) At this point I usually move the first string from 32 back to 1. Step 4 Move your left string to the right (25 to 8) Step 5 Move your right string to the left (9 to 25) Step 6 Repeat steps 1-5. There is no turning in this Technique, you simply repeat the steps over and over. The original author of this tutorial is AutumnRane, but it has also been edited by k_marie and Alicat. Click here to upload photos of your work!

Kumihimo Patterns History The Monoyama period (1573 - 1614) is the beginning of the kumihimo of today. It evidenced change in kimono style with the introduction of a very wide ”obi” (sash) that required a narrow cord to hold it in place. The braided ”obijime” was created for this purpose. Toward the end of the Edo period (1616 - 1867), the takadai, or high braiding stand, developed into its current form, one allowing for more complex, intricate patterns to be created. Edo (later named Tokyo) became the center for kumihimo. By the time of the Meiji period (1867 - 1912) samurai culture had declined and the wearing of armor was prohibited by law. Despite this, there still is a market for expensive, exclusive hand-braided products, especially for obijime.

page corner bookmarks This project comes to you at the request of Twitterer @GCcapitalM. I used to believe that a person could never have too many books, or too many bookmarks. Then I moved into an apartment slightly larger than some people’s closets (and much smaller than many people’s garages) and all these beliefs got turned on their naïeve little heads. But what a person can always look for more of is really cool unique bookmarks. Placeholders special enough for the books that are special enough to remain in your culled-out-of-spacial-necessity collection. Page corner bookmarks are cute, practical and deeply under-represented in the world.* They’re easy to make, easy to customize, and will set you apart from all those same-same flat rectangular bookmarks. If you like this tutorial, here are a couple others that might be up your alley. For the monster-loving adults in the room, try some googly-eyed paper monster wine charms. What you’ll need: Putting it all together: 1) Follow steps 2 and 3 from above.