Rio 2016: Performance-enhancing and banned drugs explained - Sport. By Catherine Hanrahan Updated Olympic swimmers have caused a storm by calling out Rio competitors who have previously been banned for returning positive drug tests. 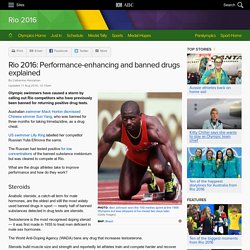 Australian swimmer Mack Horton dismissed Chinese simmer Sun Yang, who was banned for three months for taking trimetazidine, as a drug cheat. US swimmer Lilly King labelled her competitor Russian Yulia Efimova the same. The Russian had tested positive for low concentrations of the banned substance meldonium but was cleared to compete at Rio. What are the drugs athletes take to improve performance and how do they work? Steroids Anabolic steroids, a catch-all term for male hormones, are the oldest and still the most widely used banned drugs in sport — nearly half of banned substances detected in drug tests are steroids. Testosterone is the most recognised doping steroid — it was first made in 1935 to treat men deficient in male sex hormones.

The World Anti-Doping Agency (WADA) bans any drug that increases testosterone. Blood doping. Learn How to Train Like Cristiano Ronaldo with Sports Science. Cristiano Ronaldo is a footballing phenom and a physical specimen. 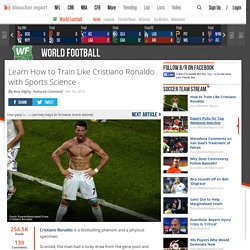 Granted, the man had a lucky draw from the gene pool and has been gifted with natural ability, but his impressive, custom-built physique is also the result of years of practice and no doubt a meticulously planned fitness regime. To quote research published in the British Journal of Sports Medicine: "The authors conclude that...deliberate training and other environmental factors are critical for elite performance...and training can be defined as the process by which genetic potential is realized.

" But what can the rest of the world learn from Ronaldo's gym schedule? Will we become equipped with lightning speed, chiseled abs and bulletproof pecs should we follow his blueprint? Maybe not, but sports science shows us we'll certainly see a dramatic improvement in our health and fitness should we take only a few little gems from his daily routine. Train Hard and Fast Six-Pack Abs So what does this mean for your daily gym visit?

One Race, Every Medalist Ever - Interactive Graphic. 100m times through history. IT was only a heat but it did little to dispel the niggling unease over quite where Usain Bolt is at. 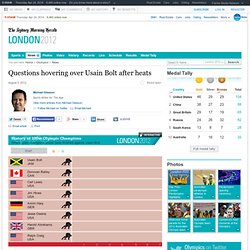 The reigning Olympic champion cruised to the line having done enough to win his heat in a time of 10.09s, but the sluggish start was still there and the pep and gallop looked forced. Straight afterwards he admitted he had slightly stumbled at the start, explaining again his slow start. As silly as it might sound to suggest of the fastest man ever that he needed to go quickly again to prove he was still the man to beat, but questions have now been raised over Bolt's absolute authority in the sport and they demanded an answer. The first opportunity to deliver a response provided a middling reply. Time was in part irrelevant in his run, Bolt needed to display he had ironed some of the recent kinks that have brought him back to the field - the slow start in particular and today did nothing to ease those concerns. Advertisement. Golf advances.

This appears to be a defect in the browser which should be addressed soon. The simplest approach to avoid this problem is to continue to use the Facebook app but not use the in-app browser. Open the settings menu by clicking the hamburger menu in the top right Choose "App Settings" from the menu Turn on the option "Links Open Externally" (This will use the device's default browser) Enabling Cookies in Internet Explorer 7, 8 & 9 Open the Internet Browser Click Tools> Internet Options>Privacy>Advanced Check Override automatic cookie handling For First-party Cookies and Third-party Cookies click Accept Click OK and OK Enabling Cookies in Firefox.

In Focus: The Drug Testing Process. Flying robot set to spur on flying feet. Inventions: The Joggobot Take a peek at an invention its creators hope will revolutionise the way you go jogging. 2, 2012 FORGET about personal trainers and jogging buddies, Chad Toprak prefers to work up a sweat alongside a hovering robot. 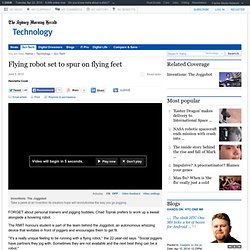 The RMIT honours student is part of the team behind the Joggobot, an autonomous whizzing device that levitates in front of joggers and encourages them to get fit. ''It's a really unique feeling to be running with a flying robot,'' the 22-year-old says. Jogging buddy … Chad Toprak with his hovering robot. The robot is suited to all types of joggers - it has a companion mode that moves in tune with your pace and a more challenging coach mode. Advertisement ''It flies in front of you at a very fast speed and you try and catch up. The idea for the levitating exercise buddy came about last October in RMIT's bustling Exertion Games Lab. Eddie McGuire Tonight (may 20) - Ben Johnson "everyone was doing it back then" PDHPE - Technology in Sport.