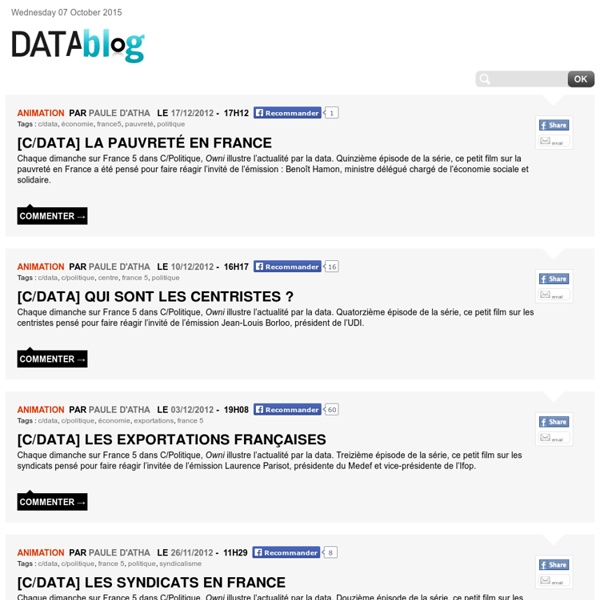 Live map of London Underground trains Loading... Powered by Leaflet — Map tiles © Thunderforest, data © OpenStreetMap contributors. Live London Underground map By Matthew Somerville. In the age of big data, data journalism has profound importance for society The promise of data journalism was a strong theme throughout the National Institute for Computer-Assisted Reporting’s (NICAR) 2012 conference. In 2012, making sense of big data through narrative and context, particularly unstructured data, will be a central goal for data scientists around the world, whether they work in newsrooms, Wall Street or Silicon Valley. Notably, that goal will be substantially enabled by a growing set of common tools, whether they’re employed by government technologists opening Chicago, healthcare technologists or newsroom developers. At NICAR 2012, you could literally see the code underpinning the future of journalism written – or at least projected – on the walls. “The energy level was incredible,” said David Herzog, associate professor for print and digital news at the Missouri School of Journalism, in an email interview after NICAR.

generatedata.com This data type randomly generates human names (mostly Western) according to the format you specify. You can specify multiple formats by separating them with the pipe (|) character. The following strings will be converted to their random name equivalent: This data type randomly generates names. It works in the same way as the Names data type, except that it creates slightly more realistic data sets since the names are mapped to the country; e.g. Italian names appear when the data set row has Italy for the country field.

Blog d'Anthony Poncier At the end of the XIX century, the contrast between blue-collar and white-collar was important and helped in strengthening the class war concept. The first still being treated worse than the second. With the digitization of business, when more and more things are automated, are we going to reinforce this pattern? Digital transformation and internal communication Few month ago, I attended as a speaker at a conference on digital transformation of organizations, in which I put forward that enterprise had to move in as one to this digitalization and leave no one behind. One of the speakers replied, correctly, that in a large organization, you can’t do everything at once and there were priorities to be set. The problem is that this sense of priorities is rarely known to all employees and most of the time they feel that it is always the same who are the beneficiaries.

Data visualization books: How to start your personal library The Excel Charts Blog There are many approaches to data visualization. Take well-know authors like Tufte, Cleveland, Ware, Few, Bertin or McCandless. There is some overlap, but they all approach data visualization from a different angle. That’s great news for you: this means that you can come up with a unique point of view that reflects your interests and needs. I suppose the books you buy are consistent with that view. Let me give you my own example.

Data journalist handbook project Rating: 5.0/5 (1 vote cast) By Federica Cocco Ravensbourne college is an ultramodern cubist design school which abuts the O2 arena on the Greenwich peninsula. Data journalism at the Guardian: what is it and how do we do it? Data journalism. What is it and how is it changing? Photograph: Alamy Here's an interesting thing: data journalism is becoming part of the establishment. Not in an Oxbridge elite kind of way (although here's some data on that) but in the way it is becoming the industry standard. Two years ago, when we launched the Datablog, all this was new. Open data journalism Data is everywhere: from governments publishing billions of bytes of the stuff, to visual artists creating new concepts of the world through to companies building businesses on the back of it. And everyone wants to be a data journalist too - the barriers for entry have never been lower as free tools change the rules on who can analyse, visualise and present data. Truly, anyone can do it. At the same time, journalism has undergone a transformation; it's not that long ago that the only way to get a story published by a major news organisation involved years of training and interning and generally slaving away until you get noticed and published. Now, the power has shifted and the days when journalists could shut themselves away from the world in order to hand out gems of beautiful writing have well and truly vanished.