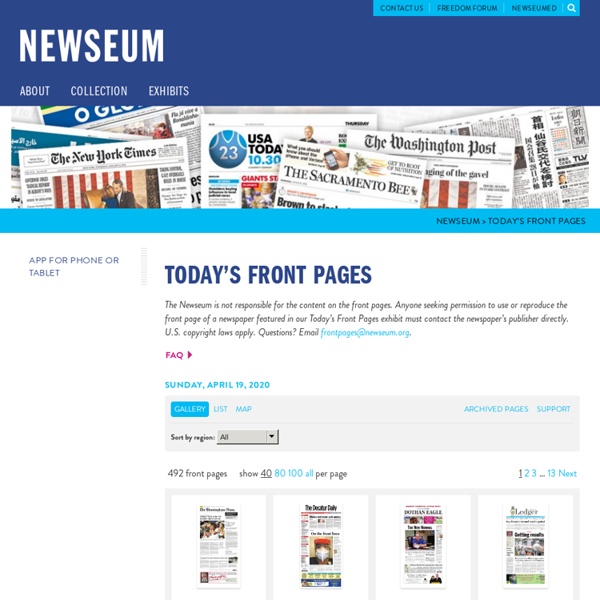 Anyone seeking permission to use or reproduce the front page of a newspaper featured in our Today’s Front Pages online gallery must contact the newspaper’s publisher directly. U.S. copyright laws apply. The Newseum DOES NOT provide access to front pages from previous dates. The archives include dates of historical significance only. The Newseum is not responsible for the content on the front pages. To protect the Newseum’s agreement with the newspapers featured in the gallery, a watermark is occasionally instituted during news events of historic significance. Share link_type: internal_linkexternal_url: 2292new_window: 0

Related:  HOW IT HAPPENS

Watch Free Movies and Documentaries Online Your Queue Settings Log Out Snag Selects super tag loudQUIETloud: A Film About the Pixies Hitman Hart: Wrestling with Shadows All Me: The Life and Times of Winfred Rembert Learn how to deal with your disappointment, to learn how to love. You can look at hate as an infinite escalator. An infinitely disturbed state of mind. An escalator where no matter how you stand on it, will lead you to a devastating destination. Hate often grows from irritation that originates from disappointment or fear. The disappointment with perhaps a lousy football referee, an unfair teacher or perhaps even the disappointment with oneself.

How To Make Rage Faces on Facebook Chat Simply type the above code that corresponds to the appropriate rage face into Facebook chat, and the image of the rage face you chose will appear, emoticon-like in its existence. Facebook didn’t suddenly become hip to the Internet and add rage face emoticons (something from which Google Chat would greatly benefit), but the ability to add rage faces to Facebook chat is more of a hack than anything else, and something to which you can add. Reddit user daychilde explains that these aren’t actually some form of ragemoticon, but that the double bracket and code corresponds to a user profile or page, and when put into Facebook chat, will show the thumbnail of the profile or page that the code links to. So, all one has to do to make any picture a Facebook chat emoticon, is to simply create a user profile or page that uses the desired picture as the profile picture, then enter the double brackets and corresponding code into Facebook chat. Here’s a tidy list of some more rage face codes:

Tunisians Document Protests Online Nawaat.orgAn image from a Tunisian blog of students in the capital, Tunis, who arranged themselves to spell out the words “No to Murder” in Arabic on Monday. Updated | 10:55 p.m. As my colleague David Kirkpatrick reports from Tunisia, protesters there have been using the Web to organize demonstrations and spread news of violent clashes with the security forces in recent weeks. Last week, one activist and blogger, Slim Amamou, even managed to alert the world to the fact that he had been arrested by apparently turning on his phone and using Google Latitude to reveal his location: inside an interior ministry building in the capital, Tunis After a campaign scarred by bigotry, it’s become OK to be racist in Britain On chaos of the kind Britain now faces, history is clear: some people always get hurt more than others. Just which groups stand to suffer most this time round is already becoming worryingly clear. Take a look at the hate reports that have come pouring in over the past few days.

Teaching With Documents Skip Navigation. Teachers Home > Teachers' Resources > Teaching With Documents All Purebred & Hybrid Dogs in ABC Order, All Dogs All Purebreds and Cross Breeds In Alphabetical Order To see a list excluding hybrids visit Purebred Dogs and Breeds Under Development Want More Search Options? Information and photos are being added on a regular basis The 99 Best Business Books “You wasted $150,000 on an education you coulda got for a buck fifty in late charges at the public library.” Will Hunting (played by Matt Damon), Good Will Hunting MBA programs don’t have a monopoly on advanced business knowledge: you can teach yourself everything you need to know to succeed in life and at work. The Personal MBA features the very best business books available, based on over ten years and thousands of hours of research.

Tunisia: Can We Please Stop Talking About ?Twitter Revolutions? - Radio Free Europe / Radio Liberty ? 2011 While the tear gas was still hanging in the streets of Tunis, many pundits were quick to christen Tunisia’s revolution. Andrew Sullivan has asked (again) whether it’s a Twitter Revolution. Elizabeth Dickinson, among others, speculated in “Foreign Policy” that it might be a “WikiLeaks revolution.” Anonymous, the online activists who recently attacked targets perceived to be against WikiLeaks, claimed it as their own after their DDOS attacks on various government targets. For cyber-utopians, the unfolding events in Tunisia and the role of social media, was a cause célèbre, a knockdown to the naysayer Malcolm Gladwell. (See my critique of Gladwell’s argument here.)