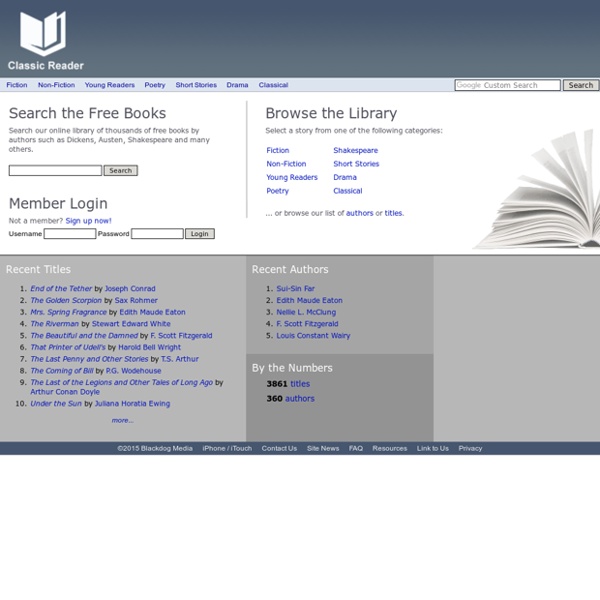 Festisite Festisite Poems & Rhyme An organized collection of poems. Visual Dictionary, Visual Thesaurus Visuwords™ online graphical dictionary — Look up words to find their meanings and associations with other words and concepts. Produce diagrams reminiscent of a neural net. Learn how words associate. English e-Reader David Copperfield was born in a few months after his father's death. When he was still a young boy his mother married a man named Murdstone. Terrible relationship was immediately set between David and his stepfather. Murdstone sends the child to a private school. Sites We Like: The Lisa Simpson Book Club One of the many many things I like about The Simpsons is that there isn’t any single character that the writers want you to sympathize with. Certainly not Homer, the dopish but lovable star of the show. Certainly not the put-upon Marge, or the delinquent Bart.

Books with Full-Text Online "The 1688 Paradise Lost and Dr. Aldrich": Metropolitan Museum Journal, v. 6 (1972) Boorsch, Suzanne (1972) 20th-Century Art: A Resource for Educators Paul, Stella (1999) Word Root Of The Day Archive « Previous1234Next » #120 Dec 01, 15 ego The Latin root word ego means “I.” This Latin root is the word origin of a fair number of English vocabulary words, including ego and egotistical. The Latin root word ego is easily recalled through the English word ego—someone with a big ego is always thinking about number one, that is, himself, and how great he is. Many Books net next > The Project Gutenberg EBook of Abandoned, by Jules Verne This eBook is for the use of anyone anywhere at no cost and with almost no restrictions whatsoever. You may copy it, give it away or re-use it under the terms of the Project Gutenberg License included with this eBook or online at www.gutenberg.org Title: Abandoned Author: Jules Verne

10 Of Our Favorite Literary TED Talks From 2015 We adore a good literary TED Talk around here on the Riot. 2015 gave us fascinating talks about poetry in prisons, book cover design, the StoryCorps project, the making of a bad feminist, and many more. Here are our 10 favorites. Harry Baker: A love poem for lonely prime numbers Math and poetry. An adorable poem about the love between 59 and 61. Hanover Historical Texts Collection : History Department : Hanover College The Hanover Historical Texts Collection makes available digital versions of historical texts for use in history and humanities courses. Search by keyword, or browse the listings below. The faculty and students of the Hanover College History Department initiated the Hanover Historical Texts Project in 1995, at a time when few primary sources were available outside of published anthologies. To make primary texts readily available for classroom use, they selected important documents, scanned print versions that were out of copyright, converted the scans into HTML format, proofread the resulting documents to correct OCR errors, edited them to provide page breaks, page numbers, and bibliographical information, and posted them online. We have since expanded the collection to include transcriptions of manuscript material from the Hanover College archives. Most of the texts in the Hanover Historical Texts Collection are in public domain.

Language Arts Games - Grammar, Punctuation, Capitalization, Vocabulary Sheppard Software's Language Arts page features a variety of games for different grade levels. Elementary students (and anyone who needs a refresher) can play the animated grammar and punctuation games, which review basic punctuation and grammar concepts. This section is continually being refined and expanded, so check back often! Middle school, high school, and adult learners can review their SAT and advanced vocabulary through the SAT Words and Vocabulary in Context games. Memorizing a wide variety of important vocabulary words will really help you succeed in the verbal sections of the SATs and GREs.

Story of the Week Jack London (1876–1916) From Jack London: Novels and StoriesIn 1902 Jack London published a story in Youth’s Companion, a magazine for young boys. Six years later he recalled the story, wrote a new version, and sent it to Richard Watson Gilder, editor of The Century Magazine. It was accepted and published, but questions were raised about the provenance of the story. A few months later, after the magazine was printed, London responded to Gilder: [The original story] was purely juvenile in treatment; its motif was not only very strong, but was very true. . . . The 26 books to read before going to university Aliens: why they are here by Bryan Appleyard “Aliens is a great book because it deftly deconstructs popular culture (from conspiracy theories to Star Trek) in order to interrogate the desires, fears and ideologies that are coded into such representations and discourses. For any student of the arts and humanities, Appleyard is a primer in how to explore the ‘everyday’ and defamiliarise it in order to see it anew – and make connections between the micro and macro.”