ELI5: How do "hive" applications get startup users? Apps like tinder, meetup, and other social apps? : explainlikeimfive. TwoNoo - Meet People. Do Stuff. The Best Mobile App Awards. CrunchBase. Meetly. From A New Activity To A New Friend; Smacktive Wants To Help You Discover What's Right Next Door. Sōsh Makes Social Actually Social By Giving You Things To Do In Your City.

Back in March, as we reported on Offline Labs‘ initial funding, we also offered up a quick glimpse of their first project, codenamed Project Dragōn. 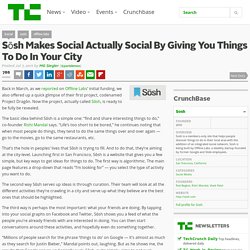 Now the project, actually called Sōsh, is ready to be fully be revealed. The basic idea behind Sōsh is a simple one: “find and share interesting things to do,” co-founder Rishi Mandal says. “Life’s too short to be bored,” he continues noting that when most people do things, they tend to do the same things over and over again — go to the movies, go to the same restaurants, etc. That’s the hole in peoples’ lives that Sōsh is trying to fill.

And to do that, they’re aiming at the city-level. The second way Sōsh serves up ideas is through curation. The third way is perhaps the most important: what your friends are doing. TheWhoot Co-Founders On Taking The Flakiness Out Of Social Planning. Back in the day, before the cell phone, people had to be where they said they’d be. 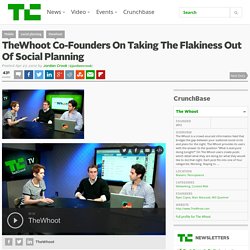 There was no such thing as flaking out, and if you did, you were just a bad person. But these days, even when we make a firm commitment, the convenience of cell phones makes it really easy to flake out at the last second. But co-founders Ryan Coyne and Will Quartner think that going out and having fun with your friends shouldn’t have to be so difficult, and thus was born TheWhoot. TheWhoot is a social planning app, available on web, iOS, and Android, that lets people choose from four simple categories to outline their nightly plans and coordinate within their social circle. Ditto: The Social App For What You Should Be Doing. Google Launches Schemer, An Activity Recommendation Engine To ‘Discover New Things To Do’ YC-Backed Vayable Launches Destinations To Crowdsource Interesting Things To Do In Cities Around The World.

Y Combinator-backed Vayable launched a few years ago to provide travelers with a new way to discover interesting things to do in far-out locations around the world. 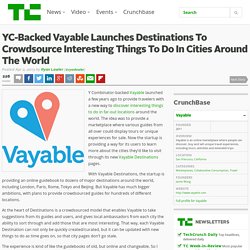 The idea was to provide a marketplace where various guides from all over could display tours or unique experiences for sale. WePopp, The Social Planning App, Raises €130K From French Angels To “Growth-Hack” Its Way To Success. Twitter. Registered users can read and post tweets, but unregistered users can only read them. 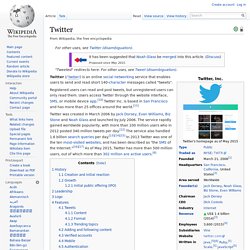 Users access Twitter through the website interface, SMS, or mobile device app.[10] Twitter Inc. is based in San Francisco and has more than 25 offices around the world.[11] History Creation and initial reaction Twitter's origins lie in a "daylong brainstorming session" held by board members of the podcasting company Odeo. Dorsey, then an undergraduate student at New York University, introduced the idea of an individual using an SMS service to communicate with a small group.[18][19] The original project code name for the service was twttr, an idea that Williams later ascribed to Noah Glass,[20] inspired by Flickr and the five-character length of American SMS short codes. ...we came across the word 'twitter', and it was just perfect.

With Twitter, it wasn't clear what it was. The first unassisted off-Earth Twitter message was posted from the International Space Station by NASA astronaut T. Growth. Wiith Is Like Tinder For Meeting New Friends, Not Dates. If you’re looking to meet new people but don’t want to explicitly commit to it being a date, as on Tinder, a new app called Wiith wants to help. 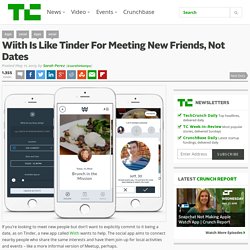 The social app aims to connect nearby people who share the same interests and have them join up for local activities and events – like a more informal version of Meetup, perhaps. The idea that the younger, mobile generation feels more comfortable connecting via apps and technology rather than in-person conversations is something that’s been tested before. A number of “Meetup”-like apps have launched in the past, but they’ve so far failed to topple the older social site Meetup.com which today still has over 21.5 million users, and hosts nearly 200,000 groups in local communities.

Wiith Is Like Tinder For Meeting New Friends, Not Dates. Untitled. How we reached the first 1000 Users. 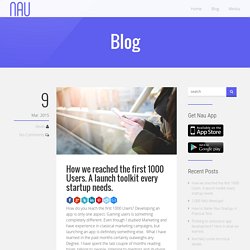 A launch toolkit every startup needs. How do you reach the first 1000 Users? Developing an app is only one aspect. Gaining users is something completely different. Even though I studied Marketing and have experience in classical marketing campaigns, but launching an app is definitely something else. 1. Do not think that by hitting the publishing button on an app store you have completed your work. 2. Leverage your own network and find your ambassadors – the more, the better.

Fiz Raises $305K For Its Social Discovery App To Find Places To Visit Based On Things To Do. Fiz, the UK startup behind the “social discovery” app for iOS and Android that helps you find places based on things to do, has closed a seed round totalling £200,000 (~$305k) to further develop its platform and build its community. 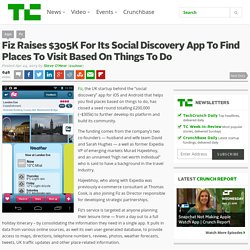 The funding comes from the company’s two co-founders — husband and wife team David and Sarah Hughes — a well as former Expedia VP of emerging markets Murad Hajeebhoy, and an unnamed “high net worth individual” who is said to have a background in the travel industry. Hajeebhoy, who along with Expedia was previously e-commerce consultant at Thomas Cook, is also joining Fiz as Director responsible for developing strategic partnerships. Fiz’s service is targeted at anyone planning their leisure time — from a day out to a full holiday itinerary – by consolidating the information they need in a single app.

However, the emphasis isn’t on just showing highly rated places — though it does pull in tips from Foursquare and supports checking in to said service. 'Assemble' app helps you meet up with buddies - CNET.