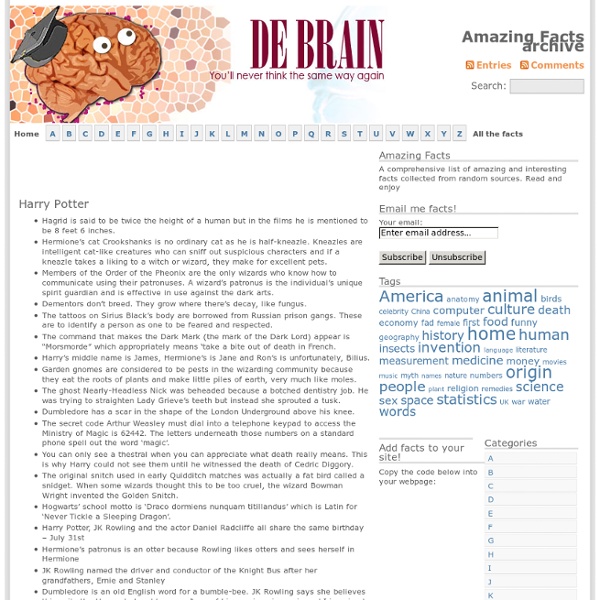 20 Facts You May Not Know About Harry Potter | It all ends this Friday. To celebrate the release of Deathly Hallows 2, here’s 20 lesser-known facts about the Harry Potter franchise. (the last several images were created by me). You May Also Like: Daydreamer by Feng, Cheng-Tsung and Lin, Kai-Ting Ball Pillow Conglomerate This is a ball pillow project like I’ve never seen before. It’s probably the best ball pillow project I’ve had the pleasure of writing about all year. The outside 9 balls of this sofa are filled with low-density foam, while the other 40 balls are filled with high-density foam. Thusly! Designers: Cheng-Tsung Feng and Kai-Ting Lin BrainDen 10 Unusual Beaches You Have Never Heard Of | Flying the Nest 1. Black Sand Beach, Hawaii The name speaks for itself. (source) 2. Again, the name gives it away. (source) 3. And you thought The Maldives couldn’t get any prettier! (source) 4. This secret paradise was created when the Mexican government in the early 1900’s made a bombsite out of the area, blasting a huge hole on the canopy of the grotto. (source) 5. Not only is Whitehaven Beach a photographers dream, it has been awarded the most eco-friendly beach in the world! (source) 6. Make sure you head down with a shovel because at this beach you can dig your very own DIY spa. (source) 7. We have been lucky enough to visit the mind blowing Maho Beach, here you can literally jump up and touch a plane as it lands meters away from you at Princess Juliana International Airport. (source) 8. Every morning, the sea at Chandipur Beach disappears, receding up to 5 kilometers from the shore. (source) 9. (source) 10. (source) Do you want to go to any of these beaches?

Harry Potter "You are protected, in short, by your ability to love! The only protection that can possibly work against the lure of power like Voldemort's! In spite of all the temptation you have endured, all the suffering, you remain pure of heart, just as pure as you were at the age of eleven, when you stared into a mirror that reflected your heart's desire, and it showed you only the way to thwart Lord Voldemort, and not immortality or riches." —Description of Harry's deepest nature[src] One consequence of Lily's loving sacrifice was that her orphaned son had to be raised by her only remaining blood relative, his Muggle aunt Petunia Dursley. The Dursley family were quite cruel to Harry growing up even forcing him to room in a broom closet and to wear their son Dudley's hand me downs. Harry played a significant role in many other battles of the Second Wizarding War. Biography Family lineage —Early description of the Potters[src] Early life (1980-1981) "This boy will be famous, a legend. St. First year