Linked Data: Evolving the Web into a Global Data Space 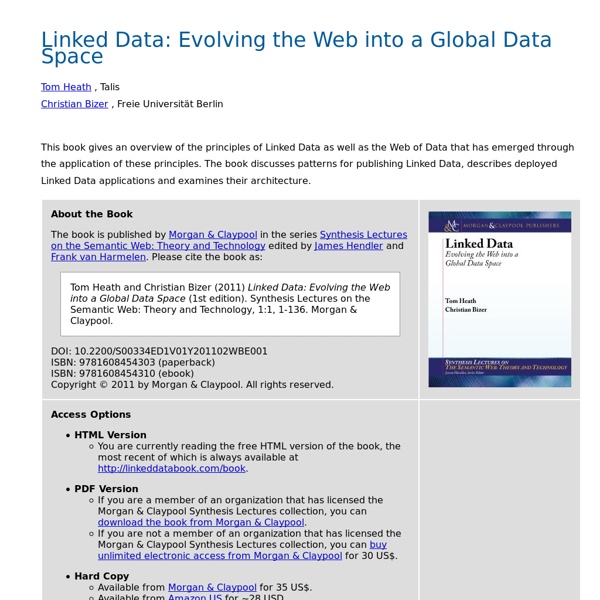 Linked Data - Design Issues Up to Design Issues The Semantic Web isn't just about putting data on the web. It is about making links, so that a person or machine can explore the web of data. With linked data, when you have some of it, you can find other, related, data. Like the web of hypertext, the web of data is constructed with documents on the web. Use URIs as names for things Use HTTP URIs so that people can look up those names. Simple. The four rules I'll refer to the steps above as rules, but they are expectations of behavior. The first rule, to identify things with URIs, is pretty much understood by most people doing semantic web technology. The second rule, to use HTTP URIs, is also widely understood. The third rule, that one should serve information on the web against a URI, is, in 2006, well followed for most ontologies, but, for some reason, not for some major datasets. The basic format here for RDF/XML, with its popular alternative serialization N3 (or Turtle). Basic web look-up or in RDF/XML Followup

A Graph-Based Movie Recommender Engine « Marko A. Rodriguez The MovieRatings Dataset The GroupLens research group has made available a corpus of movie ratings. There are 3 versions of this dataset: 100 thousand, 1 million, and 10 million ratings. Getting Started with Gremlin All of the code examples can be cut and pasted into the Gremlin console or into a Groovy/Java class within a larger application. Generating a MovieRatings Graph Before getting recommendations of which movies to watch, it is important to first parse the raw MovieLens data according to the graph schema defined above. The data will be inserted into the graph database Neo4j. Parsing Movie Data The file movie.dat contains a list of movies. The code to parse this data into Neo4j and according to the diagrammed schema is presented below. Parsing User Data The file users.dat contains a list of users. Parsing Ratings Data The file ratings.dat contains the ratings that a user provided for the movies they watched. What about the average age? Traversing the MovieLens Graph Conclusion Like this:

Giant Global Graph Well, it has been a long time since my last post here. So many topics, so little time. Some talks, a couple of Design Issues articles, but no blog posts. So The Graph word has been creeping in. Maybe it is because Net and Web have been used. The Net we normally use as short for Internet, which is the International Information Infrastructure. Simpler, more powerful. Programmers could write at a more abstract level. The word Web we normally use as short for World Wide Web. Also, it allowed unexpected re-use. So the Net and the Web may both be shaped as something mathematicians call a Graph, but they are at different levels. Now, people are making another mental move. Biologists are interested in proteins, drugs, genes. There are cries from the heart (e.g The Open Social Web Bill of Rights) for my friendship, that relationship to another person, to transcend documents and sites. We can use the word Graph, now, to distinguish from Web. I'll be thinking in the graph.

RDF Translator Linked Data | Linked Data - Connect Distributed Data across the Web The Linking Open Data cloud diagram A Graph-Based Movie Recommender Engine from the Spring Roo Perspective IntroMWN is a foundational prototype for implementing geography-context information systems. It has an ample applicability across many areas of human activity. MWN is a Java web application that uses a top-down approach for navigating the Continents, Countries and Cities of the World. It implements a treeview component that is populated on demand as the User visits a node. By selecting a Continent/Country/City node the application renders the correspondent geo-referenced map. Precisely, this is this geographic context able to be customized for serving multiple purposes. EducationTourism SalesPlanning Just to mention a few. In Education, would be a great tool for teaching kids about World concepts. In Toursim, would be a great marketing tool by showing maps, images and facts for vacation destinations. In Planning, loaded with demographics data MWN would be a great discovery tool for assisting the planning tasks. MWN Technology Profile B. and geographic-context Roogards jD

Flint SPARQL Editor Demo Welcome to Flint, our editor for SPARQL queries. Features Flint 1.0 is now available. This is our first production release. Flint has the following features: Support for SPARQL 1.1Syntax highlighting and error detection and indication as you typeCtrl-space auto-completion is sensitive to the syntactic context at the cursor position.Auto-completion for properties and classes, which are populated by what is actually in the dataset.Multiple query tabsConfigurable to work with multiple endpointsSlide out panel giving:Keyword buttons: SPARQL keyword buttons provide a simple means to enter keywords, and the buttons are enabled/disabled according to the syntactic contextThe properties and classes which occur in the datasetNamespace prefixes for the dataset (configurable)Sample queries for the dataset (configurable)Flint runs fully in the browser with no additional server-side dependencyCan be pointed to any CORS-enabled SPARQL endpointEasily embeddable in web pages Getting the Code Feedback

CubicWeb Semantic Web Framework Standards W3C standards define an Open Web Platform for application development that has the unprecedented potential to enable developers to build rich interactive experiences, powered by vast data stores, that are available on any device. Although the boundaries of the platform continue to evolve, industry leaders speak nearly in unison about how HTML5 will be the cornerstone for this platform. But the full strength of the platform relies on many more technologies that W3C and its partners are creating, including CSS, SVG, WOFF, the Semantic Web stack, XML, and a variety of APIs. W3C develops these technical specifications and guidelines through a process designed to maximize consensus about the content of a technical report, to ensure high technical and editorial quality, and to earn endorsement by W3C and the broader community. If you are learning about Web technology, you may wish to start with the introduction below, and follow links for greater detail.

Semantic Web Lab Chem2Disease - Drug Repurposing Explorer Chem2Disease applies heterogeneous graph mining algorithms developed by Dr. Yizhou Sun at UIUC. a) Bring me compounds which have less structural similarity and high chemical similarity; b) Bring me compounds which has high protein sharing similarity and less 3D shape; and c) Bring me some compounds which have high side effect similarity equal protein and chemical similarity. Hierarchical Faceted Browser Semantic web technologies help medical researchers and drug designers extract valuable information from chemical and pharmaceutical data to aid in drug research for new drug development. Muzkmesh - Semantic Music Mashups The vision of the Semantic Web is to lift current Web into semantic repositories where heterogeneous data can be queried and different services can be mashed up. Semantic Web Portal - A Research Group Portal (This tool is temporarily unavialable since the Longwell server is down) Faceted browser for Linked Open Data bubble Chem2bio2rdf