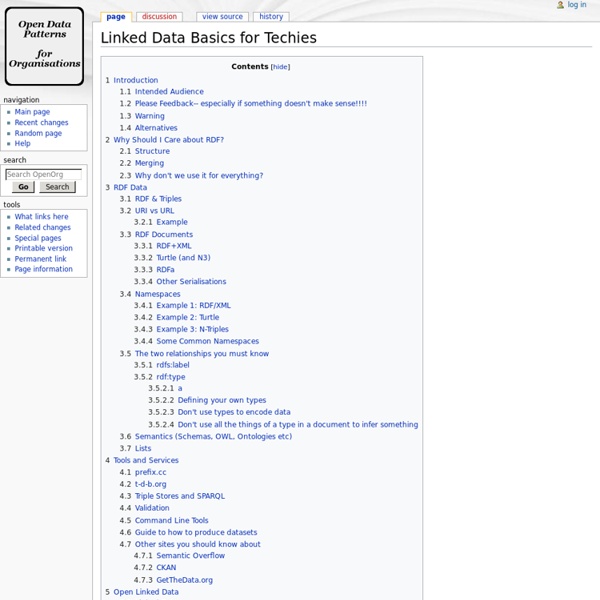 Intended Audience This is intended to be a crash course for a techie/programmer who needs to learn the basics ASAP. It is not intended as an introduction for managers or policy makers (I suggest looking at Tim Berners-Lee's TED talks if you want the executive summary). It's primarily aimed at people who're tasked with creating RDF and don't have time to faff around. Please Feedback-- especially if something doesn't make sense!!!! If you are new to RDF/Linked Data then you can help me! I put a fair bit of effort into writing this, but I am too familar with the field! If you are learning for the first time and something in this guide isn't explained very well, please drop me a line so I can improve it. cjg@ecs.soton.ac.uk Warning Some things in this guide are deliberately over-simplified. Alternatives If you don't like my way of explaining things, then there's other introductions out there; (suggest more!) Structure Tree data: (JSON, XML.) Graph data: (RDF). Merging RDF & Triples For example: Example a Related:  teaching: Linked Data

Linked Data - Design Issues Up to Design Issues The Semantic Web isn't just about putting data on the web. It is about making links, so that a person or machine can explore the web of data. With linked data, when you have some of it, you can find other, related, data. Like the web of hypertext, the web of data is constructed with documents on the web. However, unlike the web of hypertext, where links are relationships anchors in hypertext documents written in HTML, for data they links between arbitrary things described by RDF,. Use URIs as names for things Use HTTP URIs so that people can look up those names. Simple. The four rules I'll refer to the steps above as rules, but they are expectations of behavior. The first rule, to identify things with URIs, is pretty much understood by most people doing semantic web technology. The second rule, to use HTTP URIs, is also widely understood. The basic format here for RDF/XML, with its popular alternative serialization N3 (or Turtle). Basic web look-up or in RDF/XML

Build Your Own NYT Linked Data Application Now that we’ve published nearly 10,000 of our tags as Linked Open Data, you’re probably wondering what kind of cool applications you can build with this data. To help you get started (and since linked data applications are a little different from your average Web application), we thought we’d provide a sample application and detailed information about how we built it. Our sample application, “Who Went Where,” lets you explore recent Times coverage of the alumni of a specified college or university. The Who Went Where application (click for larger image) You can find the application here and beautified source code here. Before we dive into the source, let’s take a high-level look at the application’s control (which is fairly straightforward). Wait! Linked Data: The idea behind linked data is super simple. DBpedia: Have you ever noticed those handy little info boxes on certain Wikipedia articles? Step-by-Step to Your Own NYT Linked Data Application Step 1: Initializing the Auto-Complete Field

Linked Data: Evolving the Web into a Global Data Space owl:sameAs owl:sameAs is an OWL built-in property used to link an individual to an individual. Such an owl:sameAs statement indicates that two URI references actually refer to the same thing: the individuals have the same "identity". In N3 syntax = is a synonym for owl:sameAs. owl:sameAs is described in Section 5.2 Individual identity of the OWL Web Ontology Language Reference Linked Data Alternatives As pointed by Alexandre Passant there are Inconsistencies in the LOD cloud that relate back to incorrect owl:sameAs links. Examples GoodRelations Examples The following examples were provided by Martin Hepp on the GoodRelations mailing list ( October 10, 2009). "The distributed character of the Web makes it very likely that the exact same entity is being defined in multiple graphs. Note that the current rules assume perfect equivalence of the legal names resp. the EAN/UPC code.

sameAs Documentation - COEUS COEUS has now the capability to share your data in the Nanopublication format. With this new plugin you can transform your integrated data in this prominent format by following the next steps: Go to the Nanopublication Section on the Dashboard. Select the concept root and related data that will generate the nanopublications. Download tutorial Visit website December 9-12, 2013 Edinburgh, United Kingdom In this tutorial/hands-on session, we will guide you through the process of creating your own custom COEUS knowledge base. Create a new COEUS instance From GitHub download to web deployment Integrate data from heterogeneous *omics sources into your COEUS knowledge base Create your mashup merging multiple datasets Explore COEUS API to access aggregated data Build new rich web information systems using the API Access knowledge federation through the SPARQL and LinkedData interfaces Download tutorial Customizing the seed configuration is the most cumbersome task for COEUS deployment. Web settings