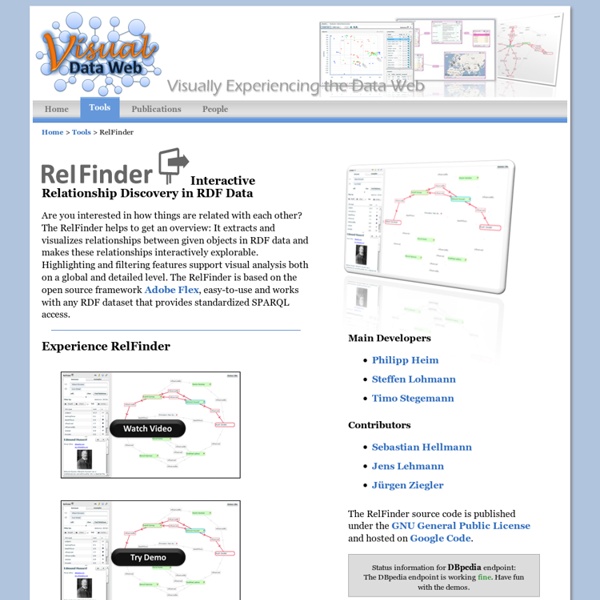 Are you interested in how things are related with each other? The RelFinder helps to get an overview: It extracts and visualizes relationships between given objects in RDF data and makes these relationships interactively explorable. Highlighting and filtering features support visual analysis both on a global and detailed level. The RelFinder is based on the open source framework Adobe Flex, easy-to-use and works with any RDF dataset that provides standardized SPARQL access. Check out the following links for some examples: The RelFinder can easily be configured to work with different RDF datasets. The RelFinder can also be more deeply integrated with your project: Integrating the RelFinder See the following examples of how the RelFinder is integrated into other projects: Ontotext applies the RelFinder to enable an exploration of relationships in the biomedical domain. All tools on this website are research prototypes that might contain errors.

Ending the Invisible Library To explain the utility of ­semantic search and linked data, Jeff Penka, director of channel and product development for information management solutions provider Zepheira, uses a simple exercise. Type “Chevy Chase” into Google’s search box, and in addition to a list of links, a panel appears on the right of the screen, displaying photos of the actor, a short bio, date of birth, height, full name, spouses and children, and a short list of movies and TV shows in which he has starred. Continue typing the letters “ma” into the search box, and the panel instantly changes, showing images, maps, current weather, and other basic information regarding the town of Chevy Chase, MD. The panels are powered by Google’s Knowledge Graph, a massive knowledgebase that launched in May 2012 with “more than 500 million [data] objects” drawn from sources including Freebase, Wikipedia, and the CIA World Factbook, “as well as more than 3.5 billion facts about and relationships between these different objects.

Interactive: Mapping the World's Friendships Technology bridges distance and borders. Individuals today can keep in touch with their friends and family in completely new ways — regardless of where they live. We explored these international connections through Facebook and found some trends — some predictable, some wholly unexpected, and some still inexplicable. Who can explain the strong link between the Democratic Republic of Congo, one of the poorest countries in the heart of Africa, and Ecuador? Linked Data OCLC has been working with Linked Data for several years. As can be seen from the publishing of the Dewey Decimal Classification (DDC), the Virtual International Authorities File (VIAF) and Faceted Application of Subject Terminology (FAST) as linked data. The release of experimental WorldCat Linked Data in June 2012 was another milestone in the exposure of WorldCat.org bibliographic metadata as linked data. The OCLC linked data strategy is an evolving mix of Linked Open Data (LOD) and Linked Enterprise Data (LED). This means that we will have incremental releases of new data and services, as we better understand how to model and publish the information. The next step on this evolutionary journey into linked data is the production release of WorldCat Works; the first entity in a series of WorldCat linked data releases.

NameBase NameBase is a web-based cross-indexed database of names that focuses on individuals involved in the international intelligence community, U.S. foreign policy, crime, and business. The focus is on the post-World War II era and on left of center, conspiracy theory, and espionage activities.[1] In the 1980s, through his company Micro Associates, he sold subscriptions to this computerized database, under its original name, Public Information Research, Inc (PIR).

AddingRulesToOntologiesWithJena – Ontology Tutorial Outline ¶ Tutorial set upJena Tutorial Program Functionality Tutorial Assignment This tutorial does not use Protege, but you might want to use it in conjunction with the tutorial to visualize the ontology. Download and unzip JenaTutorial.zip. HCLSIG/LODD/Data LODD-related datasets that the LODD group already made available as Linked Data A graph of some of the LODD datasets (dark grey), related biomedical datasets (light grey), related general-purpose datasets (white) and their interconnections. Line weights correspond to the number of links. Chicago Lobbyists Force-Directed Graph Visualization Created by Christopher Manning Summary This visualization includes the 50 highest paid lobbyists in Chicago, their clients, and the agencies they lobby. The data was compiled from ChicagoLobbyists.org in 2010.

MO - the Movie Ontology In the following, the movie ontology MO is described. The overview of the defined concepts are presented in Figure â€œConcept overview of the movie ontologyâ€. Overview of the movie ontology domain Movie related concepts Fast-Info Linked Data Basics for Techies - OpenOrg Intended Audience This is intended to be a crash course for a techie/programmer who needs to learn the basics ASAP. It is not intended as an introduction for managers or policy makers (I suggest looking at Tim Berners-Lee's TED talks if you want the executive summary). It's primarily aimed at people who're tasked with creating RDF and don't have time to faff around. It will also be useful to people who want to work with RDF data.

Understanding SKOS with an example Ontology : An ontology formally defines a common set of terms that are used to describe and represent a domain. An ontology is domain specific, and it is used to describe and represent an area of knowledge. It contains terms and the relationships among these terms. There is another level of relationship expressed by using a special group of terms: properties. These property terms describe various features and attributes of the concepts, and they can also be used to associate different classes together. TAPoR TAPoR 3 Discover research tools for studying texts. Filters: Narrow the Selection of Tools Creator(s): Sunil Goyal and Rupert Westenthaler, Salzburg Research Url: