The Basics of Clauses in English - Grammarly Blog. Clauses are groups of words that contain a subject and a verb. 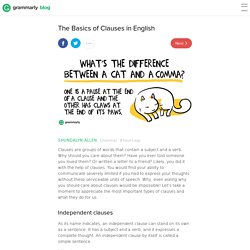 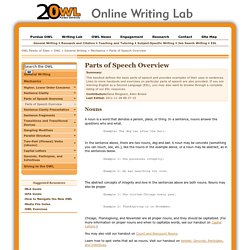 Links to more handouts and exercises on particular parts of speech are also provided. If you are learning English as a Second Language (ESL), you may also want to browse through a complete listing of our ESL resources. Contributors:Dana Bisignani, Allen BrizeeLast Edited: 2011-11-28 08:37:15 Nouns A noun is a word that denotes a person, place, or thing. Example: The dog ran after the ball. In the sentence above, there are two nouns, dog and ball. Example 1: She possesses integrity. Example 2: He was searching for love. The abstract concepts of integrity and love in the sentences above are both nouns. Example 1: She visited Chicago every year. Example 2: Thanksgiving is in November. Chicago, Thanksgiving, and November are all proper nouns, and they should be capitalized.

You may also visit our handout on Count and Noncount Nouns. Learn how to spot verbs that act as nouns. Pronouns Articles. Smart Words: Transition Words & Phrases. Transition Words and Phrases This structured list of commonly used English transition words — approximately 200, can be considered as quasi complete. 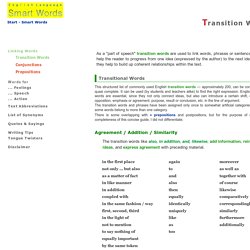 It can be used (by students and teachers alike) to find the right expression. English transition words are essential, since they not only connect ideas, but also can introduce a certain shift, contrast or opposition, emphasis or agreement, purpose, result or conclusion, etc. in the line of argument. The transition words and phrases have been assigned only once to somewhat artificial categories, although some words belong to more than one category. There is some overlapping with preposition and postposition, but for the purpose of clarity and completeness of this concise guide, I did not differentiate. Agreement / Addition / Similarity The transition words like also, in addition, and, likewise, add information, reinforce ideas, and express agreement with preceding material. in the first place not only ... but also. 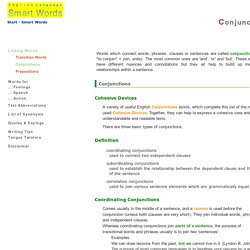 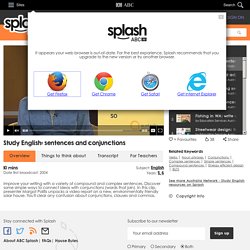 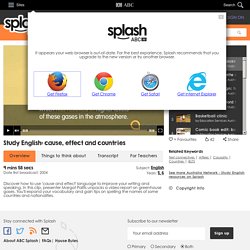 DC IELTS: Cause and effect - key IELTS vocabulary. DC IELTS: How to compare & contrast numbers in task 1. Some of the most important language in task 1 is the compare and contrast vocabulary. 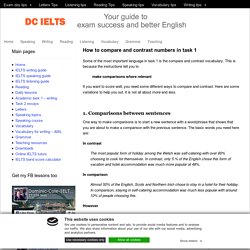 This is because the instructions tell you to make comparisons where relevant If you want to score well, you need some different ways to compare and contrast. Here are some variations to help you out. It is not all about more and less. 1. One way to make comparisons is to start a new sentence with a word/phrase that shows that you are about to make a comparison with the previous sentence. In contrast The most popular form of holiday among the Welsh was self-catering with over 60% choosing to cook for themselves. In comparison Almost 50% of the English, Scots and Northern Irish chose to stay in a hotel for their holiday. However The general pattern was for hotel accommodation to be the most popular with around half the people choosing it. On the other hand It is clear that a majority of the British chose to stay in hotel for their holiday. Prezi: Verbs,adverbs, prepositions, conjunctions & interjections.