RDF AND JSON-LD UseCases - Data on the Web Best Practices. Author : Sumit Purohit, Mark Harrison Date : See History The collection of interrelated datasets on the Web is referred to as Linked Data and it can be used by various Semantic Web technologies (RDF, OWL, SKOS, SPARQL, etc.) that provide an environment where applications can query that data, draw inferences using vocabularies, etc [1] . 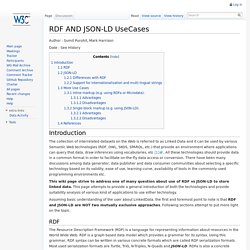 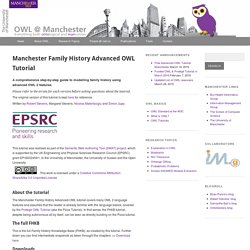 Please refer to the errata for each version before asking questions about the tutorial. The original version of this tutorial is kept here for reference. Written by Robert Stevens, Margaret Stevens, Nicolas Matentzoglu and Simon Jupp. SameAs. HCLSIG/LODD/Data. LODD-related datasets that the LODD group already made available as Linked Data A graph of some of the LODD datasets (dark grey), related biomedical datasets (light grey), related general-purpose datasets (white) and their interconnections. 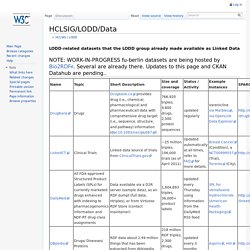 Line weights correspond to the number of links. The direction of an arrow indicates the dataset that contains the links, e.g., an arrow from A to B means that dataset A contains RDF triples that use identifiers from B. Bidirectional arrows usually indicate that the links are mirrored in both datasets. Linked Data Reactor. ImageSnippets – ImageSnippets. LibreCat/Catmandu data processing toolkit. AddingRulesToOntologiesWithJena – Ontology Tutorial. Outline ¶ Tutorial set upJena Tutorial Program Functionality Tutorial Assignment This tutorial does not use Protege, but you might want to use it in conjunction with the tutorial to visualize the ontology. 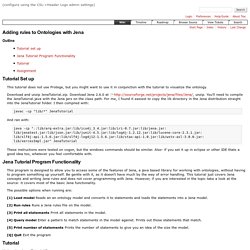 Download and unzip JenaTutorial.zip. Download Jena 2.6.0 at unzip. You'll need to compile the JenaTutorial.java with the Jena jars on the class path. RelFinder - Visual Data Web. Are you interested in how things are related with each other? 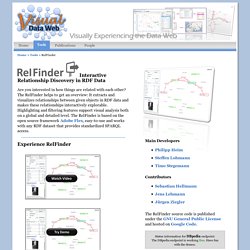 The RelFinder helps to get an overview: It extracts and visualizes relationships between given objects in RDF data and makes these relationships interactively explorable. Highlighting and filtering features support visual analysis both on a global and detailed level. The RelFinder is based on the open source framework Adobe Flex, easy-to-use and works with any RDF dataset that provides standardized SPARQL access. Ending the Invisible Library. To explain the utility of ­semantic search and linked data, Jeff Penka, director of channel and product development for information management solutions provider Zepheira, uses a simple exercise. 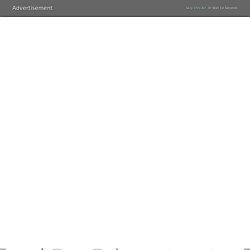 Type “Chevy Chase” into Google’s search box, and in addition to a list of links, a panel appears on the right of the screen, displaying photos of the actor, a short bio, date of birth, height, full name, spouses and children, and a short list of movies and TV shows in which he has starred. Continue typing the letters “ma” into the search box, and the panel instantly changes, showing images, maps, current weather, and other basic information regarding the town of Chevy Chase, MD. The panels are powered by Google’s Knowledge Graph, a massive knowledgebase that launched in May 2012 with “more than 500 million [data] objects” drawn from sources including Freebase, Wikipedia, and the CIA World Factbook, “as well as more than 3.5 billion facts about and relationships between these different objects.

Linked Data. OCLC has been working with Linked Data for several years. 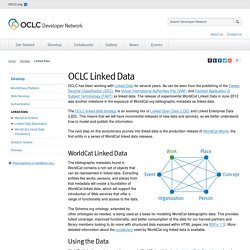 As can be seen from the publishing of the Dewey Decimal Classification (DDC), the Virtual International Authorities File (VIAF) and Faceted Application of Subject Terminology (FAST) as linked data. The release of experimental WorldCat Linked Data in June 2012 was another milestone in the exposure of WorldCat.org bibliographic metadata as linked data. The OCLC linked data strategy is an evolving mix of Linked Open Data (LOD) and Linked Enterprise Data (LED).

This means that we will have incremental releases of new data and services, as we better understand how to model and publish the information. Hyperthing - the Linked Data Validator. MO - the Movie Ontology. In the following, the movie ontology MO is described. 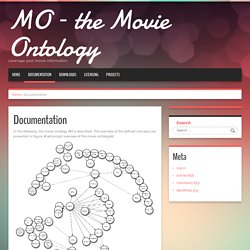 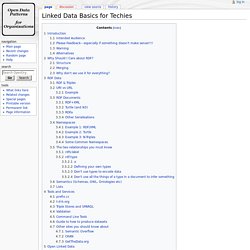 It is not intended as an introduction for managers or policy makers (I suggest looking at Tim Berners-Lee's TED talks if you want the executive summary). It's primarily aimed at people who're tasked with creating RDF and don't have time to faff around. It will also be useful to people who want to work with RDF data. Please Feedback-- especially if something doesn't make sense!!!!

Understanding SKOS with an example. Ontology : An ontology formally defines a common set of terms that are used to describe and represent a domain. 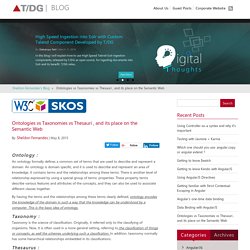 An ontology is domain specific, and it is used to describe and represent an area of knowledge. It contains terms and the relationships among these terms. There is another level of relationship expressed by using a special group of terms: properties. These property terms describe various features and attributes of the concepts, and they can also be used to associate different classes together. TAPoR. TAPoR 3 Discover research tools for studying texts. Filters: Narrow the Selection of Tools Creator(s): Sunil Goyal and Rupert Westenthaler, Salzburg Research Url: RDF Gravity (RDF Graph Visualization Tool) is a free, open-source visualization tool from Salzburg Research's Knowledge Information Systems Group. It supports RDF graph structures and OWL ontologies, including multiple RDF files, and offers a variety of filters for its visualizations. Do You Know Your Company's Ontologies? Access Innovations. Q? What can I do with a taxonomy? A. An Introduction to the British National Bibliography – Lost Boy.

This is the first of a series of posts (1, 2, 3, 4) providing background and tutorial material about the British National Bibliography. The tutorials were written as part of some freelance work I did for the British Library at the end of 2012. The material was used as input to creating the new documentation for their Linked Data platform but hasn’t been otherwise published. They are now published here with permission of the BL. This tutorial provides an introduction to the British National Bibliography (BNB) for developers interested in understanding how it could be used in their applications.

The British National Bibliography. A Linked Data Landscape. Linked Data is an approach to publishing data that makes use of web technologies to create shareable information that can be easily used by humans and computers. In the past few years, the library, archive, and museum (LAM) community has developed new tools and standards, published new vocabularies, and explored new use cases (a list of steps that defines interactions between a user and a system) and applications. All of this activity is helping to share more data across the web. Recently, librarians and archivists have been pondering how to license this data to enable widespread use, how to develop and make use of shared standards, and how to design useful and effective systems.

A Web of People and Machines: W3C Semantic Web Standards. It’s 1989. We are at CERN, the European Organization for Nuclear Research. Physicists and engineers from all over the world have gathered to seek answers about particle physics, bringing a variety of computers, file formats, software and procedures to the site. The inventor of the World Wide Web, Sir Tim Berners-Lee is also there for a brief consulting software job, working on a way to end the mess, caused by the incompatibility of formats, networks and systems. He is thinking how he can implement his long-thought idea of a software program (a software project, initially named Enquire, which became the predecessor to the World Wide Web) and design a system that will ease the process of interlinking and organizing information at CERN, by finding a way for computers to communicate indirectly over a network. Nature.com Ontologies. Using SPARQL to access Linked Open Data. Lesson Goals This lesson explains why many cultural institutions are adopting graph databases, and how researchers can access these data though the query language called SPARQL.

This is a companion document to the main GVP LOD documentation: We provide 90 sample queries for various tasks with GVP LOD. If you write an interesting query, please contribute it! This document is available at two URLs: · plain HTML version. · a sample queries UI that is integrated with the SPARQL endpoint. Ontology Classes. Linked Open Vocabularies. Untitled. CardioSHARE demo. Welcome to CardioSHARE! Working with SPARQL in MarcEdit – Terry's Worklog. Over the past couple of weeks, I’ve been working on expanding the linking services that MarcEdit can work with in order to create identifiers for controlled terms and headings.

One of the services that I’ve been experimenting with is NLM’s beta SPARQL endpoint for MESH headings. MESH has always been something that is a bit foreign to me. Feeds. Maybe you have just a wrong url. Download SPARQL results into spreadsheet. Download SPARQL results into spreadsheet. SPARQL Endpoints List of URLs - Knowledge Center - Vocabulary. SPARQL Assist language-neutral query composer. CardioSHARE demo. Home · edumbill/doap Wiki. Semast09-isaac. Term-based thesauri and SKOS (Part 1) Understanding SKOS with an example. RDF and OWL. VoiD.rkbexplorer.com. OOPS! – OntOlogy Pitfall Scanner! How to publish Linked Data on the Web. VoID. Globally Unique Identifier (GUID) The Quick Guide to GUIDs. Learning Linked Data: Making Your data harvestable via RDFa. How to create and publish a SKOS taxonomy in 5 minutes · AKSW/OntoWiki Wiki. How to return SPARQL results in JSON-LD? Linked open data. Open Data Commons.