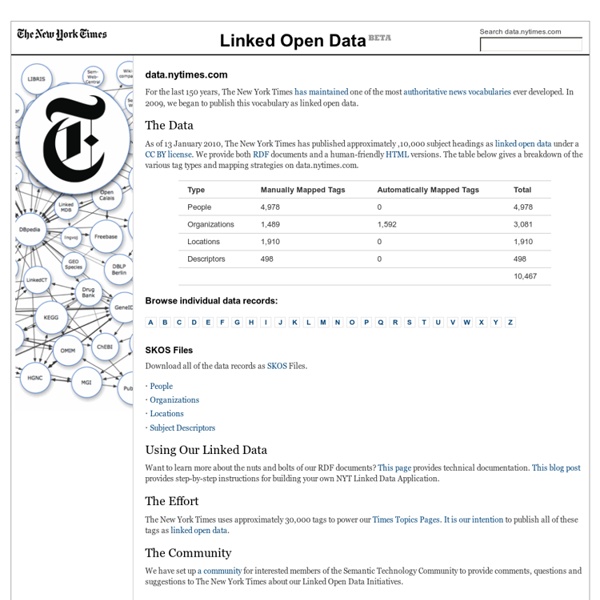 For the last 150 years, The New York Times has maintained one of the most authoritative news vocabularies ever developed. In 2009, we began to publish this vocabulary as linked open data. The Data As of 13 January 2010, The New York Times has published approximately ,10,000 subject headings as linked open data under a CC BY license. We provide both RDF documents and a human-friendly HTML versions. The table below gives a breakdown of the various tag types and mapping strategies on data.nytimes.com.

searchFAST Welcome to the new searchFAST user interface. This new interface simplifies the process of heading selection, in an easy to use one-page design. FAST subject headings were developed by adapting the Library of Congress Subject Headings (LCSH) with a simplified syntax, retaining the very rich vocabulary of LCSH while making the schema easier to understand, control, apply, and use. The new interface design combines search box, brief results list, and full view of a selected record on a single page. Several indexes and the ability to restrict the result to a desired FAST facet increase searching accuracy. RDF-Gravity Sunil Goyal, Rupert Westenthaler {sgoyal, rwestenthaler}@salzburgresearch.at Salzburg Research, Austria RDF Gravity is a tool for visualising RDF/OWL Graphs/ ontologies. Its main features are: Graph VisualizationGlobal and Local Filters (enabling specific views on a graph) Full text SearchGenerating views from RDQL QueriesVisualising multiple RDF files

Setting Data Free With Gapminder Last month Hans Rosling, the Swedish global health professor, statician and sword swallower released a desktop version of Gapminder World, his mesmerizing data visualization tool. Named one of Foreign Policy's top 100 global thinkers in 2009, the information design visionary co-founded Gapminder.org with his son and daughter-in-law aiming to make the world's most important trends accessible and digestible to global leaders, policy makers and the general public. The software they developed, Trendalyzer, (acquired by Google in 2007) translates static numbers into dynamic, interactive bubbles moving through time. The desktop version of Gapminder, which is still in beta, allows you to create and present graphs without an Internet connection.

What Is Digital Humanities and What’s it Doing in the Library? tl;dr – Libraries and digital humanities have the same goals. Stop asking if the library has a role, or what it is, and start getting involved in digital projects that are already happening. Advocate for new expanded roles and responsibilities to be able to do this. Become producers/creators in collaboration with scholars rather than servants to them. Comprehending the Digital Humanities – from Elijah Meeks at Stanford.

Tesla's Biography Tesla Biography Nikola Tesla symbolizes a unifying force and inspiration for all nations in the name of peace and science. He was a true visionary far ahead of his contemporaries in the field of scientific development. New York State and many other states in the USA proclaimed July 10, Tesla’s birthday- Nikola Tesla Day.

PubChemRDF Release Notes V1.6 beta (See the V1.5.2 beta Release Notes)Total number of triples: (last update on: )for more details, please see Table 2 1. Introduction Exhibit 3.0 Project Getting Involved Join us on IRC on freenode or browse the SIMILE Widgets mailing list archives to ask questions about Exhibit. Chances are others may have similar questions, and the list is a great place to share answers. Background The Exhibit 3 project was supported by the Library of Congress. It is a partnership among MIT Libraries, MIT CSAIL and Zepheira, including personnel from the original SIMILE project.

Data Wrangler UPDATE: The Stanford/Berkeley Wrangler research project is complete, and the software is no longer actively supported. Instead, we have started a commercial venture, Trifacta. For the most recent version of the tool, see the free Trifacta Wrangler.