Linking words and transitional phrases in English - how to use them 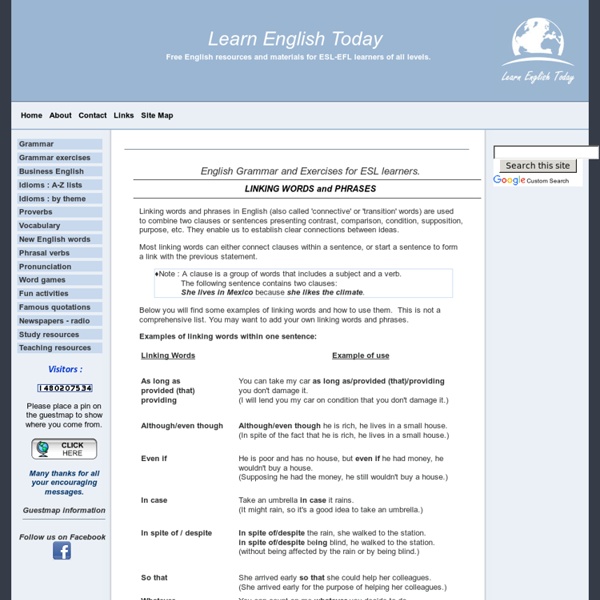 Cohesion: linking words and phrases 1.33 Cohesion: linking words and phrases You can use words or short phrases which help to guide your reader through your writing, and to link sentences, paragraphs and sections both forwards and backwards. Good use will make what you have written easy to follow; bad use might mean your style is disjointed, probably with too many short sentences, and consequently difficult to follow. Your mark could be affected either way. The best way to "get a feel" for these words is through your reading. Most textbooks and articles are well-written and will probably include a lot of these cohesive devices. Don't forget "AND"! There follows a list of words and phrases that can be used. Here are just a few examples of some of the words in action: Desktop computers are cheaper and more reliable than laptops; furthermore, they are more flexible. Prices fell by more than 20% last year. On the whole, his speech was well received, despite some complaints from new members. Top of page Transition word exercise

Improving Style: Using Transitions Transitional words and phrases can create powerful links between ideas in your paper and can help your reader understand the logic of your paper. However, these words all have different meanings, nuances, and connotations. Before using a particular transitional word in your paper, be sure you understand its meaning and usage completely and be sure that it's the right match for the logic in your paper. Addition furthermore moreover too also in the second place again in addition even more next further last, lastly finally besides and, or, nor first second, secondly, etc. Time while immediately never after later, earlier always when soon whenever meanwhile sometimes in the meantime during afterwards now, until now next following once then at length simultaneously so far this time subsequently Place here there nearby beyond wherever opposite to adjacent to neighboring on above, below Exemplification or Illustration Comparison Contrast Clarification Cause because since on account of for that reason

Transition Words & Phrases As a "part of speech" transition words are used to link words, phrases or sentences. They help the reader to progress from one idea (expressed by the author) to the next idea. Thus, they help to build up coherent relationships within the text. Transitional Words This structured list of commonly used English transition words — approximately 200, can be considered as quasi complete. There is some overlapping with prepositions and postpositions, but for the purpose of usage and completeness of this concise guide, I did not differentiate. Agreement / Addition / Similarity The transition words like also, in addition, and, likewise, add information, reinforce ideas, and express agreement with preceding material. in the first place not only ... but also as a matter of fact in like manner in addition coupled with in the same fashion / way first, second, third in the light of not to mention to say nothing of equally important by the same token again to and also then equally identically uniquely like as too moreover likewise

Linking Words Linking & Connecting Words It is essential to understand how Linking Words, as a part of speech, can be used to combine ideas in writing - and thus ensure that ideas within sentences and paragraphs are elegantly connected - for the benefit of the reader. This will help to improve your writing (e.g. essay, comment, summary (scientific) review, (research) paper, letter, abstract, report, thesis, etc.). It is also fundamental to be aware of the sometimes subtle meaning of these "small" words within the English language. "Linking Words" is used as a term to denote a class of English words which are employed to link or connect parts of speech or even whole sentences. Conjunctions and Transition Words Connecting Words Relations Between Words A concept is an idea - and what is an idea? So, a concept can be expressed as something between a single word, and an elaborate and in extenso described philosophy. Complete List of Linking & Connecting Words Download

Types of Conjunctions: Coordinate Conjunctions, Subordinate Conjunctions, and Correlative Conjunctions written by: Keren Perles • edited by: SForsyth • updated: 10/17/2014 What are conjunctions? Sure, they're joining words, but they're much more than that. Definition: Conjunctions are words that link other words, phrases or clauses. Linking Words Home » English Grammar » Linking words help you to connect ideas and sentences when you speak or write English. We can use linking words to give examples, add information, summarise, sequence information, give a reason or result, or to contrast ideas. Here's a list of the most common linking words and phrases: Giving examples For exampleFor instanceNamely The most common way to give examples is by using for example or for instance. Namely refers to something by name." Adding information AndIn additionAs well asAlsoTooFurthermoreMoreoverApart fromIn addition toBesides Ideas are often linked by and. "We discussed training, education and the budget." You can use also with not only to give emphasis." We don't usually start a sentence with also. As well as can be used at the beginning or the middle of a sentence." Too goes either at the end of the sentence, or after the subject and means as well." Apart from and besides are often used to mean as well as, or in addition to." Summarising Sequencing ideas