Fluoridation – the IQ myth. Dr. Joseph Mercola: Harvard Study Confirms Fluoride Reduces Children's IQ. Why It's Unwise to Reuse Plastic Water Bottles. Water tips. How to Detox Fluorides from Your Body. (NaturalNews) You can rid you body of most fluorides with some easy natural remedies. 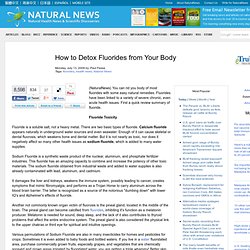 Fluorides have been linked to a variety of severe chronic, even acute health issues. First a quick review summary of fluoride. Fluoride Toxicity Fluoride is a soluble salt, not a heavy metal. There are two basic types of fluoride. Sodium Fluoride is a synthetic waste product of the nuclear, aluminum, and phosphate fertilizer industries. It damages the liver and kidneys, weakens the immune system, possibly leading to cancer, creates symptoms that mimic fibromyalgia, and performs as a Trojan Horse to carry aluminum across the blood brain barrier. Another not commonly known organ victim of fluorosis is the pineal gland, located in the middle of the brain. Various permutations of Sodium Fluoride are also in many insecticides for homes and pesticides for crops. Avoiding Fluoride Contamination As always, the first step in detoxifying is to curb taking in toxins. Fluoride in Drinking Water May Be Toxic to Sperm. October 29, 2013 | 46,831 views Share By Dr. 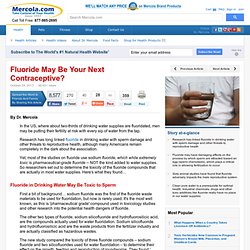 Mercola. Fluoride in Drinking Water May Be Toxic to Sperm. Are You Chronically Dehydrated. By Phillip Day - Investigative Journalist & Founder of "The Campaign For Truth In Medicine" As Featured in Food Matters "Chronic pains of the body which cannot easily be explained as injury or infection, should first and foremost be interpreted as signals of chronic water shortage in the area where the pain is registered. 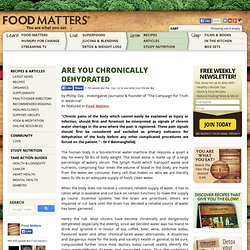 These pain signals should first be considered and excluded as primary indicators for dehydration of the body before any other complicated procedures are forced on the patient. " - Dr F Batmanghelidj The human body is a bio-electrical water machine that requires a quart a day for every 50 lbs of body weight. The blood alone is made up of a large percentage of watery serum. The lymph fluids which transport waste and nutrients, comprising four times the volume of blood in the body, are made from the water we consume. Here's the rub. Drinking Diet Soda May Put Your Health at Risk. Aspartame Dangers. Most anyone interested in natural health will understand that artificial sweeteners are not healthy for you. 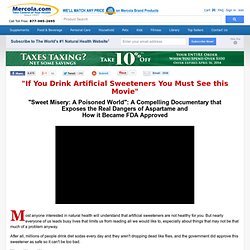 But nearly everyone of us leads busy lives that limits us from reading all we would like to, especially about things that may not be that much of a problem anyway. After all, millions of people drink diet sodas every day and they aren't dropping dead like flies, and the government did approve this sweetener as safe so it can't be too bad. Wrong, Wrong, Wrong If you believe the above you are in for a sorry surprise.

The beautiful aspect of this movie is that in a short ninety minutes you will easily in the relaxed comfort of your own home finally understand why aspartame is a toxic poison and needs to be avoided at all costs. Personally I own Dr. I had this movie for six months before I had a chance to finally have some free time and pop it in the DVD player to view it. Are You Chronically Dehydrated. Www.coralclubprague.ru/site/site-files/Knigy/Fereydoon_Batmanghelidj - Your_Bodys_Many_Cries_ for_Water_eng.pdf. Flouride on my mind. Learn about the Importance of a Healthy Lymphatic System. High Levels of Fluoride Added to Australian Drinking Water. By Dr. 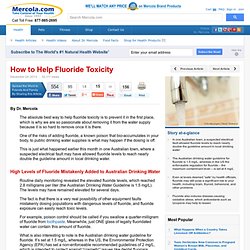 Mercola The absolute best way to help fluoride toxicity is to prevent it in the first place, which is why we are so passionate about removing it from the water supply because it is so hard to remove once it is there.One of the risks of adding fluoride, a known poison that bio-accumulates in your body, to public drinking water supplies is what may happen if the dosing is off. This is just what happened earlier this month in one Australian town, where a suspected electrical fault may have allowed fluoride levels to reach nearly double the guideline amount in local drinking water. High Levels of Fluoride Mistakenly Added to Australian Drinking Water Routine daily monitoring revealed the elevated fluoride levels, which reached 2.8 milligrams per liter (the Australian Drinking Water Guideline is 1.5 mg/L). 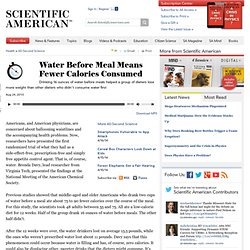 Now, researchers have presented the first randomized trial of what they hail as a side-effect-free, prescription-free and simply free appetite control agent. That is, of course, water. Brenda Davy, lead researcher from Virginia Tech, presented the findings at the National Meeting of the American Chemical Society. Previous studies showed that middle-aged and older Americans who drank two cups of water before a meal ate about 75 to 90 fewer calories over the course of the meal. For this study, the scientists took 48 adults between 55 and 75. After the 12 weeks were over, the water drinkers lost on average 15.5 pounds, while the ones who weren’t prescribed water lost about 11 pounds.