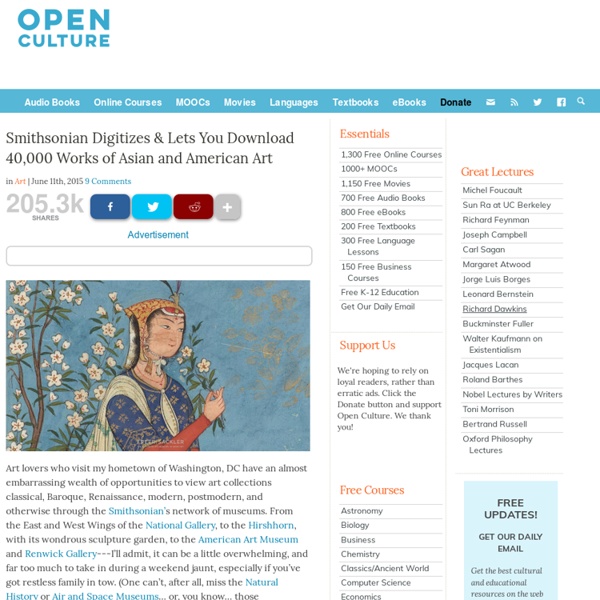 Art lovers who visit my hometown of Washington, DC have an almost embarrassing wealth of opportunities to view art collections classical, Baroque, Renaissance, modern, postmodern, and otherwise through the Smithsonian’s network of museums. From the East and West Wings of the National Gallery, to the Hirshhorn, with its wondrous sculpture garden, to the American Art Museum and Renwick Gallery---I’ll admit, it can be a little overwhelming, and far too much to take in during a weekend jaunt, especially if you’ve got restless family in tow. (One can’t, after all, miss the Natural History or Air and Space Museums… or, you know… those monuments.) In all the bustle of a DC vacation, however, one collection tends to get overlooked, and it is one of my personal favorites—the Freer and Sackler Galleries, which house the Smithsonian’s unique collection of Asian art, including the James McNeill Whistler-decorated Peacock Room. (See his “Harmony in Blue and Gold” above.) via Kottke Related Content:

Download 422 Free Art Books from The Metropolitan Museum of Art You could pay $118 on Amazon for the Metropolitan Museum of Art’s catalog The Art of Illumination: The Limbourg Brothers and the Belles Heures of Jean de France, Duc de Berry. Or you could pay $0 to download it at MetPublications, the site offering “five decades of Met Museum publications on art history available to read, download, and/or search for free.” If that strikes you as an obvious choice, prepare to spend some serious time browsing MetPublications’ collection of free art books and catalogs. You may remember that we featured the site a few years ago, back when it offered 397 whole books free for the reading, including American Impressionism and Realism: The Painting of Modern Life, 1885–1915; Leonardo da Vinci: Anatomical Drawings from the Royal Library; and Wisdom Embodied: Chinese Buddhist and Daoist Sculpture in The Metropolitan Museum of Art. Related Content:

30 Interesting Websites You Probably Haven’t Heard Of Apart from the regular dips into your favorite social media waterholes, I’m sure you have that assortment of websites you visit almost religiously every day. Routines have that nasty habit of becoming boring after a while, hence the need for lists like this. In this post you will find 30 interesting websites that you probably have never heard of. Open Content Program (The Getty) The Getty makes available, without charge, all available digital images to which the Getty holds the rights or that are in the public domain to be used for any purpose. No permission is required. For additional information please see the related press releases, as well as overviews of each phase of the program on The Getty Iris. Why Open Content?

A 9th Century Manuscript Teaches Astronomy by Making Sublime Pictures Out of Words Concrete or visual poetry does not get much respect these days. Tersely defined at the Poetry Foundation as “verse that emphasizes nonlinguistic elements in its meaning" arranged to create “a visual image of the topic,” the form looks like a clever but frivolous novelty in our very serious times. It has seemed so in times past as well. When Guillaume Apollinaire published his 1918 Calligrammes, his major collection of poems after he fought on the front lines of the first world war, he included several visual poems. Critics like Louis Aragon, “at his most hard-nosed,” notes Stephen Romer at The Guardian, “criticized it sharply for its aestheticism and frivolity.”

The Top 8 Free Online Image Editors Taking photos or making beautiful digital artwork is activities most people enjoy doing. Most people have heard of, and might be familiar with, Adobe Photoshop. It’s arguably the most popular image manipulation app around, especially for professionals. However, most people’s image editing needs would be met by apps available right in their browser. While you won’t have the extensive capabilities Photoshop has, this list of the top eight image editing web apps will likely offer more features than necessary for most people in most instances. 1. Smithsonian Libraries : Free Books : Free Texts : Download & Streaming Smithsonian Libraries America : being the latest, and most accurate description of the New World : containing the original of the inhabitants, and the remarkable voyages thither : the conquest of the vast empires of Mexico and Peru, and other large provinces and territories, with the several European plantations in those parts : also their cities, fortresses, towns, temples, mountains, and rivers : their habits, customs, manners, and religions : their plants, beasts, birds, and serpents : with an appendix containing, besides several other considerable additions, a brief survey of what hath been discover'd of the unknown south-land and the Arctick region by Ogilby, John, 1600-1676; Montanus, Arnoldus, 1625?-1683 texts eye

40 Websites Ruin Your Productivity 1. Stripgenerator Hey, get your mind out of the gutter–Stripgenerator is about comic creation, not clothing removal–though we wouldn’t claim that the two paths have never crossed. The site lets you build your very own customized comic strip in a matter of minutes. Choose from an array of characters and objects, and then bring your strip to life, one square at a time. If you’re feeling particularly adventurous, sign up to start your own “strip blog” and have your content featured on the site’s home page. World Digital Library Home No other symphonic composition has met with such a broad and complex reception as Ludwig van Beethoven's Symphony Number 9 in D minor, opus 125, popularly known as the Choral Symphony. The work marked an important development in 19th century music. In the finale, Beethoven set to music the German poet Friedrich von Schiller’s An die Freude (Ode to joy), the first time the human voice was included in a symphonic work. The symphony was first performed in Vienna on May 7, 1824. Its influence ever since has extended far beyond the field of music.

Over 100 Years Ago, the US Government Commissioned 7,500 Watercolor Paintings of Every Kind of Fruit in the Country — Morsel NEW YORK Although Higgins makes it sound simple, bringing the collection to the people was a feat of will, activism, and support from the open source and open data community. Higgins originally stumbled on the Pomological Watercolor Collection after challenging himself to discover one new cool public domain thing every day for a month. “I didn’t find this collection because I love heirloom fruits,” he said. “That was a secondary thing.” The collection ticked all the boxes of his personal challenge, but Higgins quickly realized that access to the images was limited, with high resolution versions hidden behind a largely untouched paywall. In 2015, Higgins submitted a Freedom of Information Act request in order to learn how the digitization had unfolded.

Web Design - The Old Way and The New Way My approach to web design (like the Pro Web Design Alliance I’ve just founded) is based on the principle that the vast majority of websites don’t achieve a fraction of their potential success Success is governed by just two main factors: Traffic and Conversion: How many of the right people can you attract to your site? … and …How many of those people can you persuade to take the action you want them to take? Browse - TAMI Browse for Videos by Topic Not sure what you're looking for? Start out by exploring the categories below for footage from your hometown, to see what Texas looked like in the past, or check out some of your favorite Texas icons. Genre, or Film Type At TAMI, "genre" describes more than the categories of feature films that we all know and love, such as western, action, or comedy. Our collections contain a whole range of moving image production types, from advertisements to government films to home movies. What type of film do you want to watch today?

What Shakespeare Plays Originally Sounded Like 2545Share107 In this video from The Open University, we learn about the Globe Theater's experiments with "Original Pronunciation" (OP), which is exactly what it sounds like–English as it was pronounced at the time Shakespeare's plays were written and first performed. Unsurprisingly, OP is quite different from modern pronunciation, and often changes lines dramatically. Resources for Artists: Public Domain Images From the Book Infant's Cabinet of Birds & Beasts - elusivemu.se Elusive Muse is pleased to present a few pages from the public domain book, Infant’s Cabinet of Birds & Beasts. For the rest of these illustrations or for even more public domain resources, drawing references and collage fodder join our special facebook group, MUSE STUDIO where we feature an extensive library of reference material for artists.

In 1886, the US Government Commissioned 7,500 Watercolor Paintings of Every Known Fruit in the World: Download Them in High Resolution T.S. Eliot asks in the opening stanzas of his Choruses from the Rock, “where is the knowledge we have lost in information?” The passage has been called a pointed question for our time, in which we seem to have lost the ability to learn, to make meaningful connections and contextualize events.