Supermechanical : objects that connect us 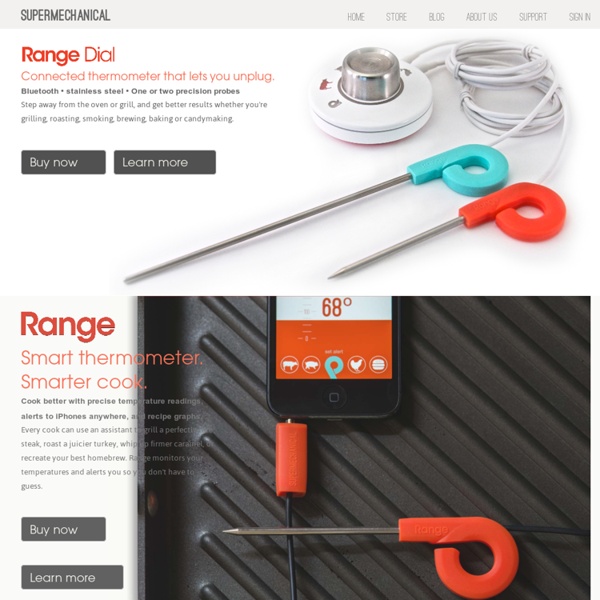 Twine alerts you to small problems before they become big problems. Quick Wi-Fi setup and AAA batteries that last up to 3 months let you drop Twine anywhere you want to monitor temperature, vibration and orientation. Additional sensors detect floods, leaks, opened doors, and signals from your other home systems. Tell a web app what to listen to with simple rules, and you'll get notifications and peace of mind via email, SMS, Twitter and more. Buy nowLearn more

Camera module – first pictures! I was sent this image this morning from Gert (not pictured), Naush (right eye and half-moustache) and JamesH (stripy shirt and chin). It’s not a terribly exciting photo – until you realise that it’s the first picture ever taken from the prototype camera add-on board we’re developing for release later in the year, which will plug into those CSI pins we expose in the middle of the Raspberry Pi. I will ask Gert, Naush and JamesH, who have been working on this in their free evenings, to answer questions in the comments below – they are also very active on our forums, so please come over and have a chat. We may downgrade the super-duperness of the camera to something with fewer than its current 14 megapixels before release; we need to keep things affordable, and a sensor of that size will end up pricey.

Design Fiction - Category - 2012 Internet of Things Awards One of the thought leaders in this category Julian Bleecker sums the topic up well in his essay "Design Fiction: A Short Essay on Design, Science, Fact and Fiction" with these words: "I proposed “design fiction” in order to think about how design can tell thoughtful, speculative stories through objects.........I decided on fiction not so much to create objects that are for storytelling, but to create objects that help think through matters-of-concern. I am interested in working through materialized thought experiments. Design fictions are propositions for new, future things done as physical instantiations rather than future project plans done through PowerPoint." "Smart, creative, imaginative ways of linking ideas to their materialization really do matter, because the future matters, and we will use whatever means possible to do create these better worlds, including the simultaneous deployment of science, fact, fiction and design."

The Essential Missing Half of Getting Things Done Since I’ve been using David Allen’s Getting Things Done system for a few years now, I’ve made many refinements to it to suit my own style. The most important has been linking the low-level project-action focus of GTD with my own high-level focus on purpose and goals. My personal GTD system starts with purpose. At that level I have a one-sentence statement of my life’s purpose plus a longer mission statement.

TRENDnet TEW-647GA TRENDnet TEW-647GA Wireless N Gaming Adapter NSPEED WIRELESS GAMING ADAPTER 300MBPS F/WII XBOX 360 PLAYSTATION from mwave.com Description: The Wireless N Gaming Adapter from TRENDnet is a wireless Ethernet bridge, designed for use with popular game consoles. Playing games online is more popular than ever, but most game consoles only feature a wired Ethernet port for network connectivity. This requires you to run a long Ethernet cable to your router for network connectivity. This device plugs directly into your Wii, Xbox, Xbox360, PS2, or PS3 and converts the Ethernet port into a high-speed 802.11n Wi-Fi device.

blog These are the extended notes from a talk I gave at #IoTlondon on January 2012. I have included some notes that didn’t make it to the final presentation due to time and format constraints. The purpose of this talk was for me to introduce the motivations and initial prototype of Hintsights, a startup company I have recently setup and will be developing in the coming months. I will start my presentation giving you a quick overview of my interests in The Internet of Things (IoT). Then I want to talk to you about the motivations and execution of Hintsights a new startup in the IoT space I’m setting up. I’m a designer I’ve been professionally involved in interaction design for about 15 years.

Copacetic Pronounced /kəʊpəˈsɛtɪk/ It’s possible that this word — meaning that something is in excellent order or satisfactory — has created more column inches of speculation in the USA than any other apart from OK. It’s rare to the point of invisibility outside North America. People mostly become aware of it in the sixties as a result of the US space program — it’s very much a Right Stuff kind of word.

Raspberry Pi Update: 14th May, 2013 wiringPi version 2 has been released and now has its own website ( to look after it. Most of the documentation on the projects site has been copied over to it the new site, but there may still be 1 or 2 pages that are still missing. I’d encourage you to use the new site if possible where there will be a forum and wiki (when I get time to implement them!) WiringPi is an Arduino wiring-like library written in C and released under the GNU LGPLv3 license which is usable from C and C++ and many other languages with suitable wrappers (See below)

Cooking up the connected kitchen With all the attention given to home automation, you'd think that more products would be devoted to the "heart of the home." The kitchen probably has more gizmos-per-inch than any other room in the house. Yet most home connectivity efforts have left the kitchen connectivity on the back burner.