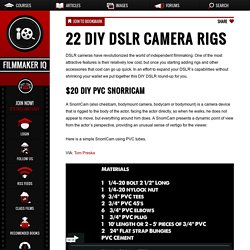 One of the most attractive features is their relatively low cost, but once you starting adding rigs and other accessories that cost can go up quick. In an effort to expand your DSLR’s capabilities without shrinking your wallet we put together this DIY DSLR round-up for you. $20 DIY PVC SnorriCam A SnorriCam (also chestcam, bodymount camera, bodycam or bodymount) is a camera device that is rigged to the body of the actor, facing the actor directly, so when he walks, he does not appear to move, but everything around him does. A SnorriCam presents a dynamic point of view from the actor’s perspective, providing an unusual sense of vertigo for the viewer.

Print Resolution How much resolution is enough? 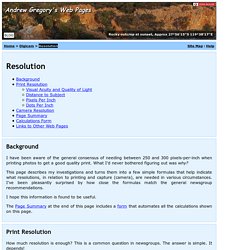 This is a common question in newsgroups. The answer is simple. It depends! It depends on several things: Your visual acuity (the quality of your eyesight)The quality of light under which you view the subject (photo)The distance at which you view the subject (photo) Visual Acuity and Quality of Light According to the 15th Edition of the Encyclopædia Britannica (1977): The power of distinguishing detail is essentially the power to resolve two stimuli separated in space, so that, if a grating of black lines on a white background is moved farther and farther away from an observer, a point is reached when he will be unable to distinguish this stimulus pattern from a uniformly gray sheet of paper.

. - Macropædia, Volume 7, page 104. Distance to Subject Clearly, as you view subjects from greater and greater distances, the level of detail you can see diminishes. C = 2 × d × tan( θ ÷ 2 ) Pixels Per Inch The reciprocal of that is the "details per inch" = 229. DIY belt-driven IGUS camera slider like pocketdolly. , but much smaller and lighter. 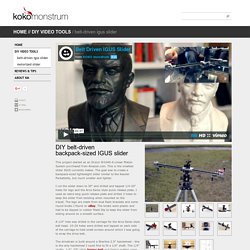 I cut the slider down to 30" and drilled and tapped 1/4-20" holes for legs and the Arca Swiss style quick release plate . I used an extra long quick release plate and drilled 2 holes to keep the slider from twisting when mounted on the tripod. The legs are made from dual flash brackets and some round knobs I found on eBay. To keep the slider from sliding around on a smooth surface. A 1/4" hole was drilled in the carriage for the Arca Swiss style ball head . 10-24 holes were drilled and tapped on each side of the carriage to hold small screws around which I was going to wrap the drive belt. The drivetrain is built around a Sherline 2.5" handwheel - this is the only handwheel I could find to fit a 1/4" shaft.

Stay up to date by “Liking” UPDATE November 26th 2010: a new profile has been launched in addition to this one, check out: Marvels Cine 2.1 Panalog profile We have worked on a Cine gamma picture style for the Canon 7D camera for the last few days, that can be compared with our PP settings for our Sony EX-1. 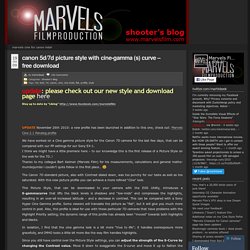 I think we might have a little premiere here – to our knowledge this is the first release of a Picture Style on the web for the 7D..! Thanks to my collegue Bart Keimen (Marvels Film) for his measurements, calculations and general maths-mumbojumbo i couldn’t quite follow in the first place… ;-) The Canon 7D standard picture, also with Contrast dialed down, was too punchy for our taste as well as too saturated. This Picture Style, that can be downloaded to your camera with the EOS Utility, introduces a S-gammacurve that lifts the black levels is shadows and “low-mids” and compresses the highlights, resulting in an over-all increased latitude – and a decrease in contrast.