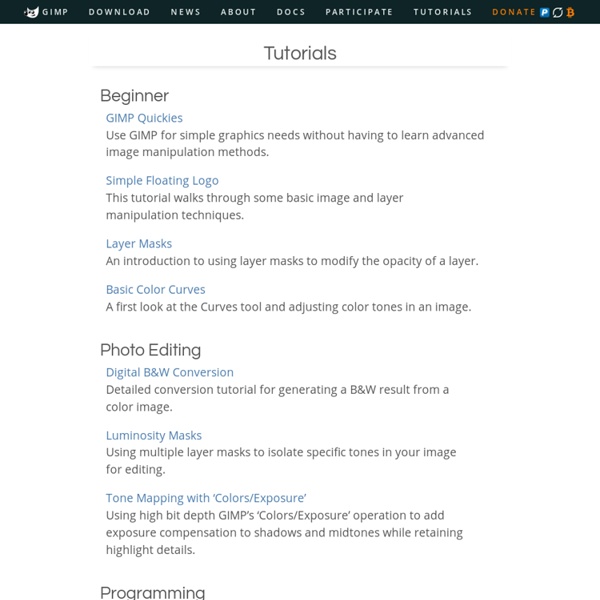 GIMP User FAQ - Frequently Asked Questions This FAQ is still a work in progress. Some sections are very outdated, other sections should probably be removed, and some new questions and answers should be added. Please contact us if you can improve it. Configuration - How To Set Your Tile Cache Quick summary for those who do not want to read all this: if your system has good swapping behavior (like most GNU/Linux systems) and if you have enough virtual memory (swap), then set the tile cache size as high as possible. If not, then set it to about 80% of the available RAM on your system. If you are not satisfied with this quick advice, then keep on reading...

Mailing Lists If you want to discuss features, tips, tricks or contribute to the development of GIMP, then we have several useful mailing lists and IRC channels for you. GIMP User The original (mostly unix based) user list. For the everyday user. Configuration - Fonts in GIMP GIMP 2.x handles a variety of font formats, most notably TrueType, OpenType and Type1. Adding Fonts for GIMP 2.x System-Wide Most distributions will propose a large choice of fonts in their package manager. The easier is usually to install them this way. In case you want to manually add third-party fonts (commercial, downloaded...), adding fonts is usually just a matter of moving font files into a directory that is searched by the font system.

IRC Channels Several IRC channels and mailing lists are available for discussing GIMP-related topics. IRC offers real-time communication, but be aware that there may be long periods of silence in the channels when other users are busy or away from their keyboards. When you join the GIMP IRC channels, please do not ask if somebody can help you. Configuration - Controlling GIMP with MIDI devices What? Since version 2.2, GIMP comes with a module that allows to control it using MIDI devices. Currently this is only supported on GNU/Linux with either the OSS or the ALSA sound drivers. It might work on other platforms as well if there is a way to access the raw MIDI stream by opening a device. Enabling the MIDI Module

Introduction Introduction to GIMP GIMP is an acronym for GNU Image Manipulation Program. It is a freely distributed program for such tasks as photo retouching, image composition and image authoring. It has many capabilities. It can be used as a simple paint program, an expert quality photo retouching program, an online batch processing system, a mass production image renderer, an image format converter, etc.

Scott Photographics GIMP & Photoshop Tutorials The Gimp is a fantastic and free piece of software that can run on all major operating systems and can do nearly any graphic related task! I have been using GIMP for over two years now and really appreciated the many tutorials I had at hand for when I was starting out. Since the early days I have produced my own tutorials in an effort to give back to the open source community and so the purpose of this post is to share and acknowledge the hard work that people have put in into making these great tutorials of 2010! Best GIMP Tutorials of 2010 GIMP Manual Pages - gimprc (5) - RC(5) manual page Comments are introduced by a hash sign (#), and continue until the end of the line. Blank lines are ignored. The gimprc file associates values with properties. These properties may be set by lisp-like assignments of the form: Either spaces or tabs may be used to separate the name from the value. (temp-path "${gimp_dir}/tmp")

Documentation GNU Image Manipulation Program Skip to page contents [ News | Screenshots | Features | Downloads | Documentation | Get Involved ][ Plug-in Registry | GIMP Development ] [ Donations ] [ Documentation GIMP User Manual GIMP comes with a built-in help system. GIMP Python module documentation This document outlines the interfaces to GIMP-Python, which is a set of Python modules that act as a wrapper to libgimp allowing the writing of plug-ins for GIMP. In this way, GIMP-Python is similar to Script-Fu, except that you can use the full set of Python extension modules from the plug-in. Introduction What is it? GIMP-Python is a scripting extension for GIMP, similar to Script-Fu. The main difference is in what is called first.