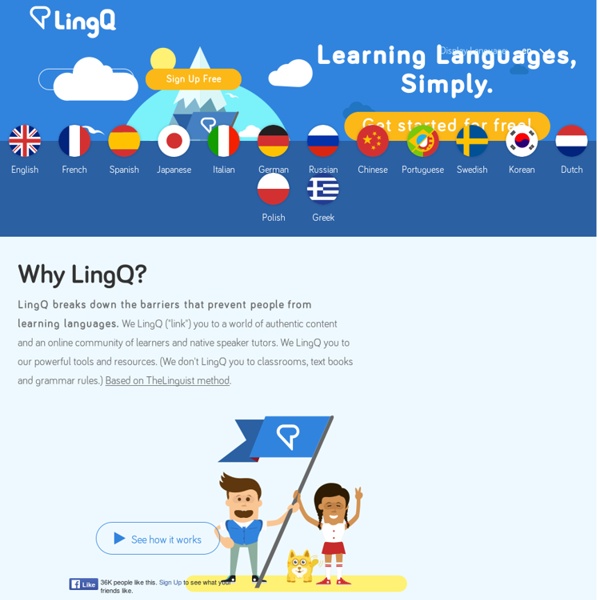 LingQ breaks down the barriers that prevent people from learning languages. We LingQ ("link") you to a world of authentic content and an online community of learners and native speaker tutors. We LingQ you to our powerful tools and resources. (We don't LingQ you to classrooms, text books and grammar rules.) Based on TheLinguist method. <div class="noscript"><h2>You must have JavaScript enabled to use this site.

Wikibooks:Language Learning Difficulty for English Speakers This world is full of thousands of languages. Wikibooks also hosts many different language learning books, but on a smaller scale, of course. Becoming fluent in a language is no walk in the park, even if you do already display an aptitude for languages. This Wikibook will act as a very useful guide showing how difficult learning any particular language you have set your eyes on is. Many people wonder how long it will take them to become proficient in a certain language.

Informal French & Slang Tutorial This informal French slang tutorial is designed to teach the real spoken form of French - which is very different from the formal way of writing - as well as common French slang words. Sentences marked with → were taken from a random search online to give you authentic examples of slang usage. When you click they will open in a new window. You can skip to the list of the slang exercises and don't forget to check out Authentic French Listening Resources, which provides audio and video clips of real, spoken French in various accents with transcripts so you can listen and read along, plus some exercises to test your comprehension. Student Fishbowl Student Fishbowl This activity requires 60-90 minutes. Purpose:

Introduction Introduction German is an easy language for native English speakers to learn. Both languages are Western (meaning Germanic) languages, so they have many similarities. English and German both use the Roman alphabet and have many words that are similar. This is because many English words were derived from German words. German grammar and sentence structure also shares some similarities with English.

16 Common Core Technology Tools 16 Common Core Technology Tools For Speaking & Listening by Dr. Melissa Comer and Dr. Leslie Suters, Presenters at the 2014 Teaching and Learning with the iPad Conference German Words and Phrases 1. Basic Phrases Ich is not actually pronounced ikh, unless you are speaking a northern dialect of German. If you are speaking a southern dialect, then it is more like ish. There is no equivalent sound in English.

App to learn Italian (android, iOS) What you will find in MosaLingua Italian More than 3000 flash cardsof the most useful words and phrases for communicating and making yourself understood.14 categoriesThe Basics, Eating, Accommodation, Transportation, Shopping, Tourism, Hobbies, Socializing, People, Time, Telecommunications, Emergencies…More than 100 sub-categoriesAt a restaurant, Cooking, At a hotel, The home, Buying & Negotiating, Sports, Partying, Flirting…Learning tipsUseful tips and tricks for faster progressEssential grammarIrregular verbs, pronouns, connectors, how to use the past tense, and soon mini grammar lessons… Audio pronunciationAll the words and phrases are pronounced by native speakers.16 dialoguesdepicting common situations that arise during travel or everyday life.10 levels of difficultyfrom the essential basics to get by to specialized vocabularyMore than 200 bonusesthat you unlock as you progress to stay motivated This post is also available in Español, French and Português.

Motivating speaking activities for lower levels Planning time has been shown to increase production in speaking tasks. Lower level learners often find it especially difficult to speak spontaneously, so these activities incorporate ‘thinking time’ during which learners can prepare for speaking by planning what they are going to say, and asking the teacher or using a dictionary to look up missing vocabulary. The following activities are relatively short, with minimal materials preparation time for the teacher. They are designed for use as a warmer or a filler in the middle or at the end of a class. German Gender Hints - Noun Gender in German Nouns and Gender in German You are here: German for Beginners > Lesson 3 > Gender Hints > Noun Suffixes Most world languages have nouns that are either masculine or feminine.