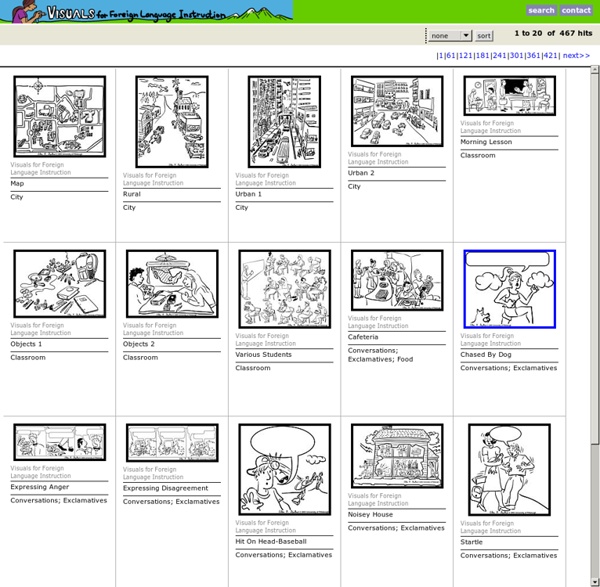 Visuals for Foreign Language Instruction The illustrations were created as part of the Visuals for Developing Communication Skills in Foreign Language Classes project, initated by Paul Toth, former Director of the Less-Commonly-Taught Languages Center. It was funded by the Provost through the Advisory Council on Instructional Excellence (ACIE) as part of the Innovation in Education Awards program, and brought to completion by Paul's successors, Dawn McCormick and David Quinto-Pozos. All of the illustrations were drawn by Alec Sarkas from the Center for Instructional Development & Distance Education (CIDDE). The project was managed by Nick Laudato and Bill Johnston from CIDDE. Search for an image…

Image Tools Skip to main content Create interactive lessons using any digital content including wikis with our free sister product TES Teach. Get it on the web or iPad! Verschlimmbesserung As Confucius says (Analects 58): "If terms are incorrect, language will be incongruous; and if language be incongruous, deeds will be imperfect... Hence, a man of superior mind, certain of his terms, is fitted to speak; and being certain of what he says can proceed upon it." Awhile back i encountered the German term Verschlimmbesserung--an "improvement" that makes things worse (via BetterThanEnglish dot com). This seems very much of our times, when tamper monkeys not only have seized control of the means of production, they also seem infected with a restlessness entirely disconnected from any awareness of the consequence of their actions.

20 Classrooms From Around The World Is This Now A Typical Classroom? 11.28K Views 0 Likes When you imagine a 'typical classroom' - what do you picture? If it's a boatload of laptops facing you with students hiding behind the screens, you're not far off. spanspace - Websites Listen to the radio or read the daily newspaper in Spanish (or, come o think of it, any language you like!!!) Great grammar site and you can print off grammar flashcards too This is a great site for online practice with grammar. You will be an expert by the time you finish. The eClock - Learn all about time - Interactive Clock Digital On/Off Words On/Off Roman/Arabic To rotate the hands on the interactive e-Clock, move the cursor over the clock face, press the left mouse button down and move the mouse. Rotate the mouse clockwise around the centere of the e-Clock to move the time forward and move the mouse in an anticlockwise direction around the center of the eClock. to move time backwards.

Printable Flash Cards for Vocabulary Words-with Photographs Sluggish Sluggish audio/easy/sluggish.mp3 adjective lacking energy; inactive Our cat is sluggish during the day. Foreign Language Teaching Methods About the Site Foreign Language Teaching Methods focuses on 12 different aspects of language teaching, each taught by a different expert instructor. The site contains video footage from an actual methods course held at the University of Texas at Austin. This flexible resource is designed to be used by foreign language teachers as a component of a classroom methods course or as a stand-alone course for independent learners. “While I was taking this course, I was already changing what I was doing and I can already see the difference. ”

Oral presentations: Using visual aids Using visual aids It is very helpful to use visual aids in a presentation, as they help people to understand your topic. Most people learn visually as well as aurally. And particularly if your accent is different from your audience's accent, it can be very helpful to let them see your keywords on a slide. Just take care not to use too many; people may want to take notes, so give them time to write. Overheads How Long to Learn That Language? Here’s a Map for That For English-speakers, Romanian is easier to learn than German. And you’ll be speaking Russian sooner than Hungarian. How is that? Because the Foreign Service Institute says so. Located in Arlington, Virginia, the FSI is the U.S. government’s main provider of foreign affairs training, including language courses. As the chief learning organisation for the State Department, the FSI is where diplomats go to study the languages they will need on foreign postings.

10 Activities for Music in the Classroom (that aren’t fill-in-the-blank!) Bonne rentrée tous et toutes! I simply cannot believe I’m not back in the high school classroom today, greeting all of my new and returning students. I know I’m where I am supposed to be right now but today, I miss those kids, my colleagues, and the energy of high school way more than I thought I would. Even though for many teachers in the United States today is the very first day of classes, what better way to kick off the year than jumping right into Mercredi musique tomorrow?! The first thing my students wanted to know when I told them I would not be returning this fall was, “Will we still be able to do Mercredi musique?!”

AUDIO VISUAL AIDS/ INSTRUCTIONAL MEDIA/ TEACHING AIDS CTET 2015 Exam Notes Audio Visual Aids/ Instructional Media/ Teaching Aids In Teaching Introduction: Audio visual material must be seen in their relationship to teaching as a whole and to the learning process as a whole, until the teacher understands the relationship between audio visual material and teaching learning process. Audio visual materials are produced, distributed and used as planned components of educational programs. It helps the process of learning that is motivation, classification and stimulation.