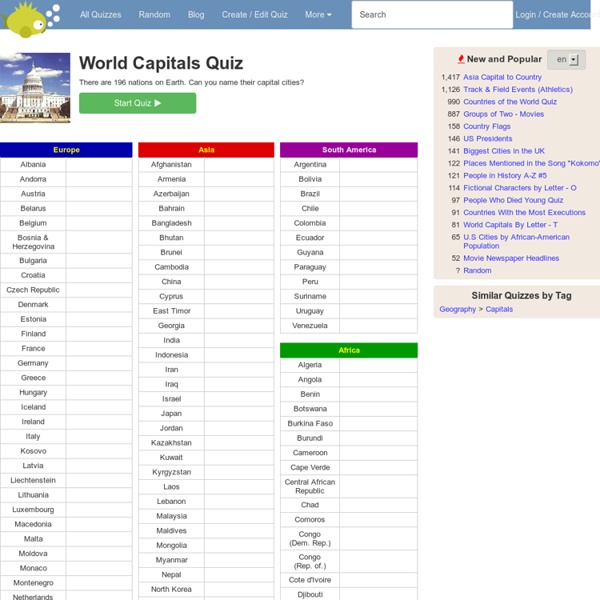 Pyramides de Gizeh 3841 tombs and monuments listed. Thanks to 10 years of collected research, Dassault Systèmes was able to reconstruct the Giza Necropolis as accurately as possible. How To Learn English Infographic Kaplan asked hundreds of people what helped them learn English. Did watching television shows, listening to music or playing video games help? Read our infographic to learn some interesting facts about what has helped people learn the English language. Do you agree with our research?

Moving slabs [This Dynamic Earth, USGS] The layer of the Earth we live on is broken into a dozen or so rigid slabs (called tectonic plates by geologists) that are moving relative to one another. "Historical perspective" Monolingual VS Bilingual Monolingual Vs Bilingual Are two languages better than one? Is it "better" to speak one language or two - or even several? Find out where you stand? What you need to know about tornadoes (CNN) -- A tornado is a funnel-shaped cloud that forms under thunderclouds and contains rapidly rotating air. Most tornadoes form from severe thunderstorms. Hurricanes can also produce tornadoes. Other Facts: Tornado winds may exceed 300 miles (480 kilometers) per hour.

Students' Attitudes Towards Learning English Pronunciation Author: JennyCoPoints: 10 Not Ranked Yet Today, when the English language represents a lingua franca, it is important for people all over the world to become proficient in it. As the number of learners grows, teaching techniques keep improving, but some aspects remain neglected. As one of the aspects that never seems to have gained much attention by teachers of English, pronunciation remains a challenge for a great number of learners. However, this doesn’t mean that students think it’s unimportant. On the contrary, as shown in a recent research by Saundz, most students believe pronunciation is an important aspect of language learning, although they rarely have the opportunity to practice it in class.

Water phase diagram Phase diagrams The phase diagram of water Density change Triple points How To Teach English Infographic Kaplan love researching the world of ESL education and finding out more about how people learn English. We surveyed more than 500 ESL teachers, including our own, from around the world to discover what tools they use to enhance their lessons. Take a look at the results in our infographic! Do you agree with the findings? Let us know by leaving a comment. Infographic: English Pronunciation Learning Trends Following our recently published white paper on students’ attitudes towards learning English pronunciation, we decided to create a visual summary that would better explain the key findings from our survey. The idea of asking students about their opinion on this issue was to dig deeper into their perception of this particular aspect of language learning. Not quite surprisingly, we discovered that most students think pronunciation important, but insufficiently taught. SEE ALSO: Practicing Pronunciation for Higher Scores in Standardized English Tests (TOEFL/IELTS) Namely, even though English is taught in a large number of schools and colleges around the world today, some of its aspects keep being overlooked in the classrooms.