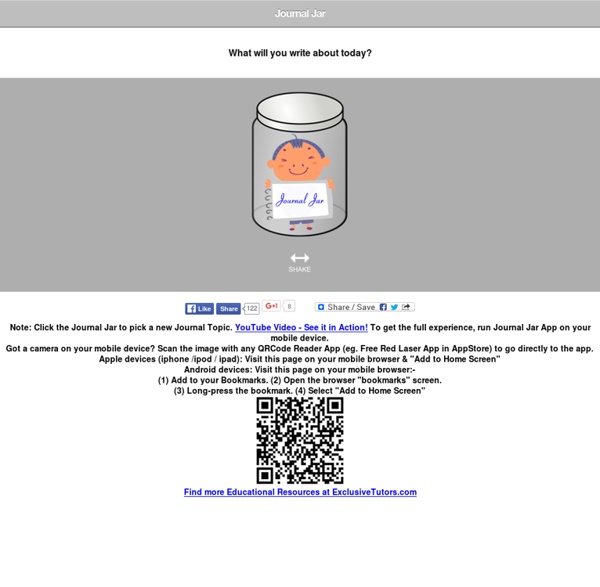 Interactive Storytelling for English Exams How much can we actually teach students for exams without being exam-oriented? Wherever we go in professional development the reality of teaching to the test always crops up as something to avoid or get around somehow. Yet, we want our students to achieve high standards and we want them to have qualifications. For me, it’s a matter of teaching BEYOND the test.

The 50 most important English proverbs The 50 most important English proverbs What are proverbs? Every culture has a collection of wise sayings that offer advice about how to live your life. The First Creative Writing School on the Internet Writers.com has been offering online writing classes in all genres since 1995 -- the first writing school on the Internet. Our web site has been visited by writers from over one hundred ninety-five countries. Our classes are taught by published, working writers who are also experienced teachers. We can help you improve your skills, explore new directions, ready your work for publication, or simply provide a community, inspiration and deadlines to start you writing and keep you writing.

Serial Taxi This EFL lesson plan is designed around Serial Taxi a short animation by Paolo Cogliati and the theme of murder mysteries. Students predict what is going to happen in a film, watch a short film and write a murder mystery. Language level: Intermediate (B1) – Upper Intermediate (B2) Learner type: Teens and adults Time: 60 minutes Activity: Watching a short film, reading, speaking and writing Write and Improve: An Online writing helper Writing is probably the most difficult area for learners to improve on by themselves. Writing demands an audience and if you have no-one to tell you how successful your efforts are – or not – then you are doomed to repeat your failures into eternity. Cambridge English have, however, just released a beta version of an online, browser based writing helper. Currently free to use and requiring only a facebook login (or email registration), the service allows learners to input their answers to one of the five questions provided (or submit a piece of writing of their own choice) and to get feedback on their efforts. In the screenshot above, the highlighted text at the bottom of the image is the submitted text. The colour coding represents the program’s opinion of the learner level the different sections of the text represent.

Short Stories at East of the Web A game of Scrabble has serious consequences. - Length: 4 pages - Age Rating: PG - Genre: Crime, Humor A semi-barbaric king devises a semi-barabaric (but entirely fair) method of criminal trial involving two doors, a beautiful lady and a very hungry tiger. Statement by the President on the Situation in Paris THE PRESIDENT: Good evening, everybody. I just want to make a few brief comments about the attacks across Paris tonight. Once again, we’ve seen an outrageous attempt to terrorize innocent civilians. This is an attack not just on Paris, it’s an attack not just on the people of France, but this is an attack on all of humanity and the universal values that we share. We stand prepared and ready to provide whatever assistance that the government and the people of France need to respond.

Barbaric Yawp in the 21st Century: Using Tech to Engage Budding Poets What if Dead Poets Society were set in modern times? Would Mr. Keating (Robin Williams' character) tweet Walt Whitman? Stories for Scouts & Scouters Ghost Stories There must be hundreds of good Ghost Stories and other spooky stories out there, suitable for telling around the campfire. Please send me your favorites and I'll include them here.

How ordinary people decide to become terrorists For all the hand-wringing in the US over the threat posed by Syrian refugees, it turned out that so far, every positively identified terrorist from the Paris attacks was not a refugee at all — but rather, a European Union citizen. Those in the US who advocate for accepting Syrian refugees have emphasized this as a way to counter fear of refugees. But this revelation highlights a very different and all-too-real threat: Westerners who join terror groups such as ISIS. And people are naturally wondering what the hell is going on in France and Belgium that a handful of its citizens would commit such terrible acts against innocent people.

Digital Poets! Web Tools, Apps, & Lesson Ideas “Poetry is when an emotion has found its thought and the thought has found words.” by Robert Frost April is National Poetry month. I invite you to consider the possibilities of teaching with poetry. Poetry makes content come alive, because the poet has a deep connection with the subject matter. Poems can help students see what they consider a boring or tedious topic in a different light.

The Man on the Moon This EFL lesson plan is designed around a short film commissioned by the British department store John Lewis, directed by Some Such and the theme of Christmas. Students watch a short film, predict a story and talk about ways of showing people they are loved. I would ask all teachers who use Film English to consider buying my book Film in Action as the royalties which I receive from sales help to keep the website completely free. Language level: Pre-intermediate (A2) –Intermediate (B1) 'Our melting, shifting, liquid world': celebrities read poems on climate change I am here, at the scene of a breaking; broken bits, the metaphor of crushed paradise; forested history of burning; a trace element version of heritage. Ex-colliery lands Persuasion Map Grades 9 – 12 | Lesson Plan | Standard Lesson Demonstrating Understanding of Richard Wright's Rite of Passage Students use the elements of persuasion for a specific audience to demonstrate their understanding of Richard Wright's accessible and engaging coming-of-age novel, Rite of Passage. Grades 6 – 12 | Lesson Plan Persuade Me in Five Slides! Creating Persuasive Digital Stories