Jessica_biel_miserable_grey.jpg (JPEG Image, 1100 × 1650 pixels) - Scaled (60%) Woman gets pissed about usage of "Xmas," gets schooled by a fellow Christian. All Yesterdays : NPR. Kasandra Perkins Did Not Have to Die. Photo via Instagram. 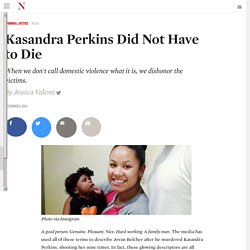 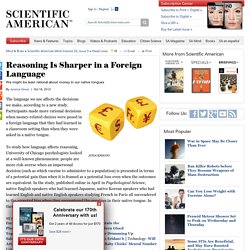 Participants made more rational decisions when money-related choices were posed in a foreign language that they had learned in a classroom setting than when they were asked in a native tongue. To study how language affects reasoning, University of Chicago psychologists looked at a well-known phenomenon: people are more risk-averse when an impersonal decision (such as which vaccine to administer to a population) is presented in terms of a potential gain than when it is framed as a potential loss even when the outcomes are equivalent. In the study, published online in April in Psychological Science, native English speakers who had learned Japanese, native Korean speakers who had learned English and native English speakers studying French in Paris all surrendered to the expected bias when they encountered the question in their native tongue. In their foreign language, however, the bias disappeared. Koalas to the Max dot Com. They told him not to enforce drug laws in white areas. Really.

A Year in Jail for Not Stating the Power of God? How Kentucky Office of Homeland Security May Be Violating the Separation of Church and State. November 21, 2012 | Like this article? 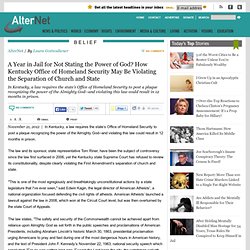 Join our email list: Stay up to date with the latest headlines via email. In Kentucky, a law requires the state’s Office of Homeland Security to post a plaque recognizing the power of the Almighty God--and violating this law could result in 12 months in prison. The law and its sponsor, state representative Tom Riner, have been the subject of controversy since the law first surfaced in 2006, yet the Kentucky state Supreme Court has refused to review its constitutionality, despite clearly violating the First Amendment’s separation of church and state.

"This is one of the most egregiously and breathtakingly unconstitutional actions by a state legislature that I've ever seen," said Edwin Kagin, the legal director of American Atheists', a national organization focused defending the civil rights of atheists. Keep Austin Weird. Racist Teens Forced to Answer for Tweets About the 'Nigger' President. RRRRRRRROLL_gif. Up Goer Five. Vamps, Prom Queens and Sluts: Covering the Women of the Petraeus Scandal. Gender, Context, and Expression of Positive Emotion. DuXZQ.jpg (JPEG Image, 534 × 700 pixels) Swjyh.jpg (JPEG Image, 475 × 391 pixels) JAM with Chrome. tP8Oy.gif (GIF Image, 620 × 407 pixels) Bizarre Micro-Planets Made From Hundreds of Landscape Photos. While working on films like Moulin Rouge and 300, photographer Catherine Nelson learned cutting edge compositing techniques that she’s now using to make fantastical planets out of her favorite landscapes. 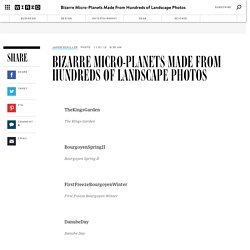 “I guess you could say that they are impossible photos that are absolutely inspired by the real,” she says. “They are my interpretation of the environment around me.” Inspired by the Flemish painter Pieter Bruegel, who was known for including several different scenes in one painting, Nelson said she chose the shape of a circle — as opposed to a traditional rectangle — because it allowed her to do something similar. She wanted to take the best moments from a various landscapes and piece them together in one frame. Working in the movie industry as a compositor, she would often combine multiple elements — live shots, green-screen shots, still images, etc. — into one scene using meticulous digital manipulation. Psych Central - Depression Screening Test. Romney: 'Some Gays Are Actually Having Children. It's Not Right on Paper. It's Not Right in Fact.'  We've witnessed many Mitt Romneys, but the one unearthed by the Boston Globe's Murray Waas yesterday is perhaps the most vicious and cruel: a zealot who, as Massachusetts governor, became hellbent on stigmatizing the children of gay and lesbian parents, labeling these kids as outcasts and causing them to suffer hardship throughout their lives. 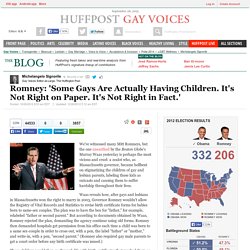 Waas reveals how, after gays and lesbians in Massachusetts won the right to marry in 2003, Governor Romney wouldn't allow the Registry of Vital Records and Statistics to revise birth certificate forms for babies born to same-sex couples. The plan was to have the box for "father," for example, relabeled "father or second parent. " But according to documents obtained by Waas, Romney rejected the plan, demanding the agency continue using old forms. Days Without a GOP Rape Mention.

Branding the Presidents of the United States. The University of Stirling, Scotland... Justice Department Files Lawsuit in Mississippi to Protect the Constitutional Rights of Children. The Justice Department filed a lawsuit today against the city of Meridian, Miss.; Lauderdale County, Miss.; judges of the Lauderdale County Youth Court; and the state of Mississippi alleging that the defendants systematically violate the due process rights of juveniles. 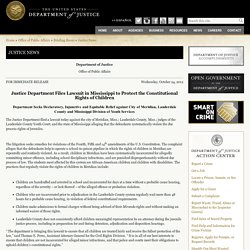 The litigation seeks remedies for violations of the Fourth, Fifth and 14th amendments of the U.S. Constitution. Funniest Fight You Will Ever See. ANxVE.jpg (JPEG Image, 640 × 960 pixels) Cthulhu. Cthulhu[1] is a fictional cosmic entity that first appeared in the short story "The Call of Cthulhu", published in the pulp magazine Weird Tales in 1928. 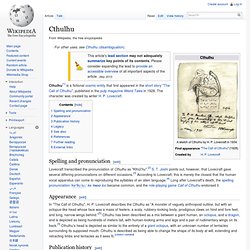 The character was created by writer H. P. Second Circuit Rules Section 3 of DOMA Unconstitutional in <i>Windsor v. USA</i>  The Second Circuit has just issued its opinion in Windsor v. 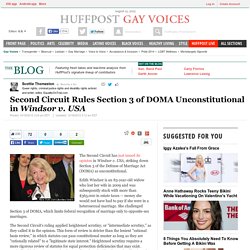 USA, striking down Section 3 of the Defense of Marriage Act (DOMA) as unconstitutional. Edith Windsor is an 83-year-old widow who lost her wife in 2009 and was subsequently stuck with more than $363,000 in estate taxes -- money she would not have had to pay if she were in a heterosexual marriage. She challenged Section 3 of DOMA, which limits federal recognition of marriage only to opposite-sex marriages. Group in Logic and the Methodology of Science - Home. The hierarchy of hexagons. True confessions: I find a great deal of the school geometry canon tedious. 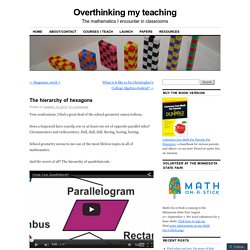 Does a trapezoid have exactly one or at least one set of opposite parallel sides? Circumcenters and orthocenters. Dull, dull, dull. Boring, boring, boring. gCYie.jpg (JPEG Image, 2611 × 1469 pixels) - Scaled (39%) In Defence of Amanda Todd  If you thought Amanda Todd's suicide was the biggest tragedy you'd be reading about this week, think again. 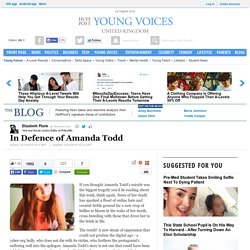 News of her death has sparked a flood of online hate and created fertile ground for a new crop of bullies to bloom in the wake of her death, cross-breeding with those that drove her to the brink in life. The result? A new strain of oppression that could not predate the digital age - a cyber-org bully, who does not die with its victim, who furthers the protagonist's suffering well into the epilogue. Amanda Todd's story is not one that could have been told thirty years ago.

Gap Pulls 'Manifest Destiny' Shirts After Outrage, Twitter Response. Up until Monday afternoon, Gap Inc. was selling a controversial men's t-shirt with the words "Manifest Destiny" sprawled across the chest. The shirt went on sale close to a month ago but it wasn't until a UCLA student started a Change.org petition urging the Gap to stop selling the shirt that the news went viral.

"This article of clothing promotes a belief that has resulted in the mass genocide of indigenous people, and it serves to normalize oppression," explains the Change.org petition. "This shirt is marketed to teens and young adults, and it gives no context for the racism and inequality that persists in our society, to this day, as a result of this doctrine. " The shirt was created by Mark McNairy, a designer chosen by GQ magazine as one of America's Best New Designers, and the shirt is part of a collection branded "GQ x Gap.

" The 'limited edition' shirts went on sale on September 19, 2012, according to GQ. “I’m not a feminist or anything, but…” When I was in second year, I took a class called Women’s Reproductive Health. In this class, we were told to choose a topic for our group presentation. I chose ‘The Influence of the Media on Adolescent Sexuality,’ a topic that particularly interests me. The day before the presentation, our group of five came together to review the material. While looking through Tom Ford’s advertisements that depict women as purely sexual objects, I heard a fellow group member exclaim, “I mean, I’m not a feminist or anything, but that is disgusting.” Woman Vs. Internet: How Anita Sarkeesian beat the trolls. Gaming, undeniably, has an inherent problem with gender equality. Our industry is largely dominated by men. As a medium it has, for most of its history, targeted itself firmly at the young male demographic, making the vast majority of its money from men aged 14-25.

Cosmo, the Hacker ‘God’ Who Fell to Earth. Mitt Romney on Obama Voters. The best thing about living in Switzerland. Liquids under an electron microscope. Manchester SP. Contact Information. Clear Lake SP. Hurricane Isaac By Moonlight. Return of the Jury - Fredo and Pidjin. The Webcomic. Of my own - Fredo and Pidjin. The Webcomic. In Google’s Inner Circle, a Falling Number of Women. Todd Akin and the Anti-Science House Science Committee.