Western Looting Of Ukraine Has Begun 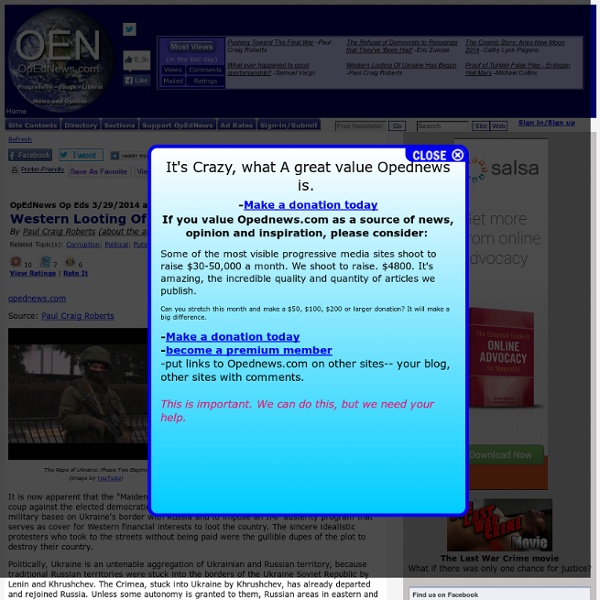 Source: Paul Craig Roberts The Rape of Ukraine: Phase Two Begins(image by YouTube) It is now apparent that the "Maiden protests" in Kiev were in actuality a Washington organized coup against the elected democratic government. The purpose of the coup is to put NATO military bases on Ukraine's border with Russia and to impose an IMF austerity program that serves as cover for Western financial interests to loot the country. The sincere idealistic protesters who took to the streets without being paid were the gullible dupes of the plot to destroy their country. Politically, Ukraine is an untenable aggregation of Ukrainian and Russian territory, because traditional Russian territories were stuck into the borders of the Ukraine Soviet Republic by Lenin and Khrushchev. The Washington-imposed coup faces other possible difficulties from what seems to be a growing conflict between the well-organized Right Sector and the Washington-imposed stooges. Now the looting can begin. One final word.

World Bank ‘Development’ Is Driving—Not Solving—Inequality and Poverty Martin Kirk | Commondreams | April 9th 2014 The thing about “international development” is that it’s a bit of a murky, catch-all term. It’s got a good feel to it – if you’re involved in international development, you’re more often than not seen as one of the good guys. It’s swirling about in a bucket of meaning alongside “foreign aid” and “disaster relief”. It’s about “doing good”, which is about helping people improve their situation, right? It could be helping people escape from the ruins of an earthquake or the ruins of economic mismanagement but that’s what “international development” is generally understood to be about.

Internationalists Are Pushing The World Towards Globally Engineered Economic Warfare Brandon Smith | Activist Post Over a year ago I published an essay entitled ‘The Linchpin Lie: How Global Collapse Will Be Sold To The Masses’. This essay addressed efforts by the ever malicious Rand Corporation to create a false narrative surrounding the possibility of global collapse. Linchpin Theory, as it was named by it’s originator and Rand Corp. employee, John Casti, is I believe the very future of propaganda. Every engineered crisis needs a clever cover story, and in Linchpin Theory, we are told that all human catastrophe is a mere natural product of the “overcomplexity” within various systems. Yes, there is no accounting of false flag geopolitics or elitist conspiracy, no acknowledgment of deliberately initiated chaos; such things do not exist in the world of “linchpins”.

Ukraine says military jet downed, two copters hit NEW: Pro-Russian separatists hit two helicopters, Ukranian military confirmsNEW: A Ukranian military jet also was struck on WednesdayAnother Ukrainian fighter jet was shot down on SundayUkraine continues a battle with pro-Russian rebels in the country's east Kiev, Ukraine (CNN) -- Pro-Russian separatists struck two helicopters as well as a jet with portable air defense systems Wednesday in the Luhansk region of Ukraine. A source within the Ukrainian military confirmed the statement by the "South-East Army," which claims the group downed an Ukrainian Su-25 military jet and a Mi-24 helicopter. Another Ukrainian Mi-24 helicopter was struck, also in the Luhansk region, but it is unclear as to whether that aircraft crashed.

Robbing Argentina in the US court in Manhattan - fraud of medieval style and proportions No summons, invalid Notice of Assignment for US Judge Thomas Griesa, and denial of public access to the authentication records in a court that is notorious for fraud in banking matters... Conduct of the US courts over the past decade should be deemed an unannounced regime change in the United States. It is also central to abuse of the people of the United States and failing banking regulation. In the case of NML v Republic of Argentina the US courts reach beyond the territorial US, to rob the people of Argentina through fraud of medieval style and proportions.

Et tu, Britain? United Kingdom to join China in the anti-dollar alliance March 13, 2015Willemstad, Curacao In another awkward blow to the rapidly waning US-dollar hegemony, America and Britain just had their “It’s not you, it’s me” moment. Late yesterday, the government of the United Kingdom announced that they would be applying to join the Chinese-led Asian Infrastructure Investment Bank… as a founding member. This is huge. Right now, the United States dominates the global financial system. Ukraine warns of 'full-scale war' over Russia crisis Your video will begin momentarily. NEW: Sen. Robert Menendez calls for the arming of Ukrainian forces.

Greece Effectively Defaults To IMF Using SDR Reserves To “Repay” Fund; 1 Month Countdown Begins (Before It's News) When Monday’s Eurogroup meeting concluded without an agreement between Greece and its creditors, it should have been game over for Athens. With pensioners at their breaking point and with local governments reluctant to comply with a decree mandating a sweep of excess cash reserves, the idea that Greece would somehow be able to scrape together €750 million euros to make a scheduled payment to the IMF today seemed far-fetched at best which is why we asked the following question Monday afternoon: