Japanese Mentaiko Spaghetti (Pasta With Spicy Cod Roe and Butter Sauce) Recipe. BBC Food - Recipes - Squid with wild leaves and a mushroom broth. Homemade Sushi: Nigiri and Gunkanmaki Style — adventuresincooking.com. I’ve always been a lover of sushi, this is in part due to the abundance of fresh salmon in the Pacific northwest and the large number of Japanese immigrants, which resulted in an abundance of really good and really affordable sushi places around the town I grew up in. 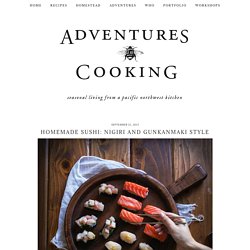 It wasn’t until a couple years ago when my friend Heather mentioned that she made her own sushi that the thought occurred to me that I could actually make it myself. I was still pretty timid about working with raw seafood, however, and the idea of making the perfect sushi rice, both malleable yet sticky, made me a little nervous, so I ended up putting it off. But then something magical happened. Takoyaki.

‘Takoyaki’, a ball-shaped savoury snack, is one of the dishes that most foreign tourists try to eat in Japan. 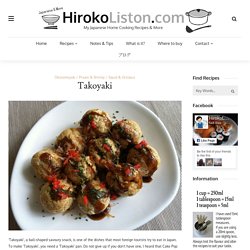 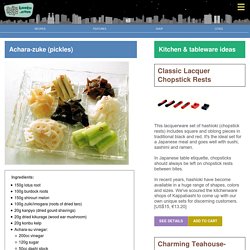 The name comes from the Portuguese word "achar" for pickles. Kenchin-style Vegetable Soup - Bento.com. Originally from Kenchoji Temple, the first Zen Buddhist temple in Japan, this warming soup is a typical temple dish, made from root vegetables stif-fried in sesame oil then simmered in konbu-flavored broth. 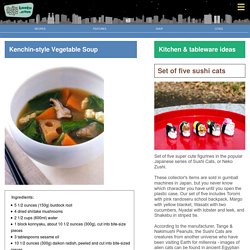 Crumbling a block of tofu into the soup for all to share is an example of the Zen belief that food should be divided equally between the residents of a temple, regardless of their status. This recipe uses soy sauce, but there is also a miso version. Dashi, ponzu (Japanese cooking basics) - Bento.com. Green Beans in Sesame Dressing (Ingen no goma-ae) - Bento.com. Oyako-donburi (chicken and egg over rice) - Bento.com. Reprinted with permission from the book: Japanese Cooking: A Simple Art by Shizuo Tsuji Kodansha International. 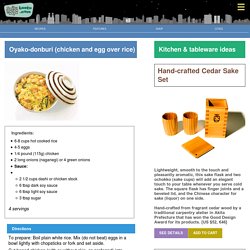 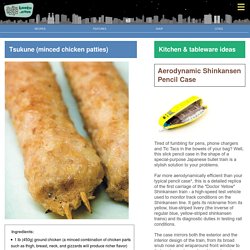 As a matter of fact, a recent article in The New York Times claimed that the izakaya is starting to shove the sushi bar off its pedestal. Eight Tokyo pubs are introduced, ranging from those that serve the traditional Japanese comfort foods such as yakitori (barbequed chicken), to those offering highly innovative creations. For the home chef, the hungry gourmet, the food professional, this is more than a cookbook. 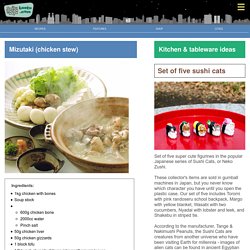 The origin is said to be Chinese-style cooked chicken or a Western style of consomme soup. Mizutaki can be made with two kinds of stock: a clear soup or milky chicken broth soup. To enjoy mizutaki, taste the soup before eating the chicken, and when the taste of the soup has become strong enough, add vegetables to the soup. After enjoying all these ingredients, use the soup for zousui (rice porridge) or udon noodles. Directions 1. 2. 3. 4. 5. Shredded Daikon - Bento.com. Flat Fish with Salt (Karei Shio-yaki) - Bento.com. Saikyo-zuke (sweet miso-marinated fish) - Bento.com. Reprinted with permission from the book: Izakaya: The Japanese Pub Cookbook by Mark Robinson Kodansha International Japanese pubs, called izakaya, are attracting growing attention in Japan and overseas. 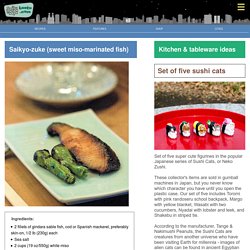 As a matter of fact, a recent article in The New York Times claimed that the izakaya is starting to shove the sushi bar off its pedestal. Eight Tokyo pubs are introduced, ranging from those that serve the traditional Japanese comfort foods such as yakitori (barbequed chicken), to those offering highly innovative creations. For the home chef, the hungry gourmet, the food professional, this is more than a cookbook. Scallops in Yuzu (Hotate Yuzu Kama-yaki) - Bento.com. Takoyaki (octopus balls) - Bento.com. How to make real Japanese Takoyaki from Osaka (Octopus balls) ~ Cooking with Mira. Sushi Rice - Bento.com. Onigiri 101: How to Make Japanese Rice Balls - DIY Lunch Recipes. Every other week, Anna Hezel talks about the innovations, decorations, and other quiet touches that make a party memorable. 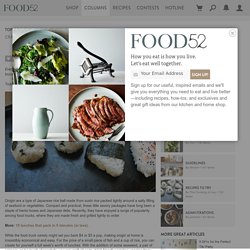 Today: Everything you need to know about making this food truck treat at home. Onigiri are a type of Japanese rice ball made from sushi rice packed tightly around a salty filling of seafood or vegetables. Compact and practical, these little savory packages have long been a staple of bento boxes and Japanese delis. Recently, they have enjoyed a surge of popularity among food trucks, where they are made fresh and grilled lightly to order. More: 10 lunches that pack in 5 minutes (or less). While the food truck variety might set you back $4 or $5 a pop, making onigiri at home is irresistibly economical and easy. If you're in the mood for a warm meal, just toast your onigiri lightly for 2 to 3 minutes per side on a pan brushed with sesame oil. Traditional fillings:- cod roe- pickled plum- teriyaki salmon Wet your hands and scoop up a small handful of the rice.

How to Make Onigiri - Easy Step-by-Step Instructions. Since before chopsticks were invented, the Japanese have been rolling sticky rice up into balls that are easy to pick up and eat by hand. 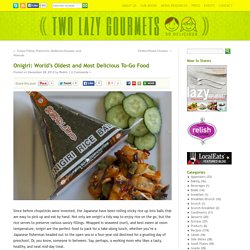 Not only are onigiri a tidy way to enjoy rice on the go, but the rice serves to preserve various savory fillings. Wrapped in seaweed (nori), and best eaten at room temperature, onigiri are the perfect food to pack for a take-along lunch, whether you’re a Japanese fisherman headed out to the open sea or a four-year-old destined for a grueling day of preschool.

Or, you know, someone in between. Say, perhaps, a working mom who likes a tasty, healthy, and neat mid-day treat. While they’re sometimes found in the shape of an actual ball or in cutesie forms such as kitties and bunny rabbits, around here, triangular onigiri is the most common. The Rice. Onigiri 101: How to Make Japanese Rice Balls - DIY Lunch Recipes. Food - Recipes : Udon noodles in miso broth with stir-fried greens and shichimi pepper. Nobu's Miso-Marinated Black Cod — Recipes From The Kitchn. There are many reasons to love black cod — it is sustainably fished, full of healthy omega-3 fatty acids, and wonderfully buttery when cooked. Here's one more: a classic Japanese recipe for black cod that makes an easy, elegant dinner for guests or a quick main dish you can prep over the weekend.

This recipe is adapted from Nobu: The Cookbook, which my partner gifted to me many years ago after we visited Nobu's restaurant and swooned over the omakase tasting menu. It's a very simple dish; there is some advance preparation, but it's easy and quick. Three days before cooking the fish, you make the four-ingredient miso marinade and then marinate the fish in it, sealed in a covered container in the fridge. Cooking is quick — just a quick sear on the stovetop and then a few minutes in the oven. Tester's Notes Although I've enjoyed miso black cod many times in Japanese restaurants, I had never made it at home until I tried this recipe. And the resulting fish is impressive and quite foolproof. Food - Recipes : Chashu (Japanese braised pork) Food - Recipes : Chashu pork ramen. Nabemono: Japanese Salmon, Miso and Shiitake Hot Pot. Nabemono is a traditional Japanese soup typically served in winter time, when the warmth of hot broth seems particularly welcome.

It’s a simple, throw-it-together kind of a food – one that can adapt easily to whatever bits of fish, meat or vegetables lurk in your refrigerator. I make it frequently in the winter, particularly when I am tired but in want of something nourishing. Lately, as I work like crazy to finish up the Nourished Kitchen Cookbook (it’s due in just a few weeks – fortunately, I have a friend to help in the kitchen), nabemono have made their appearance on our table more often than I’d like to admit. Nabemono is a compound word; that is, it combines the word nabe (cooking pot) with mono (stuff). Nabemono are typically cooked in a clay pot called a donabe, which you can find here. I first experienced nabemono in Japan, where I grew up and learned to really love fresh foods. Food - Recipes : Seafood ramen.