About Sushi. Sushi PRO - Your resource for all things sushi! Sushi. Different types of nigiri-zushi and a temaki ready to be eaten Sushi (すし, 寿司, 鮨, 鮓, 寿斗, 寿し, 壽司?) 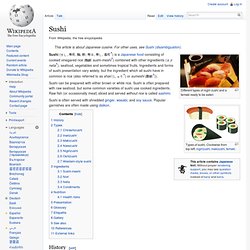 Is a Japanese food consisting of cooked vinegared rice (鮨飯, sushi-meshi?) Combined with other ingredients (ネタ, neta?) , seafood, vegetables and sometimes tropical fruits. Ingredients and forms of sushi presentation vary widely, but the ingredient which all sushi have in common is rice (also referred to as shari (しゃり?) Sushi can be prepared with either brown or white rice. Sushi is often served with shredded ginger, wasabi, and soy sauce. History[edit] The original type of sushi, known today as nare-zushi (馴れ寿司, 熟寿司,) was first made in Southeast Asia, possibly along what is now known as the Mekong River.

The contemporary version, internationally known as "sushi", was created by Hanaya Yohei (1799–1858) at the end of the Edo period in Edo. Types[edit] The common ingredient across all kinds of sushi is vinegared sushi rice. Chirashizushi[edit] Chirashizushi with raw ingredients. Bento. A typical bento Bento (弁当, bentō?) 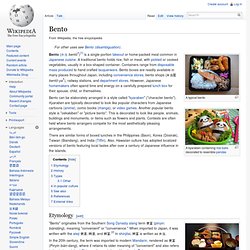 [1] is a single-portion takeout or home-packed meal common in Japanese cuisine. A traditional bento holds rice, fish or meat, with pickled or cooked vegetables, usually in a box-shaped container. Containers range from disposable mass produced to hand crafted lacquerware. Bento boxes are readily available in many places throughout Japan, including convenience stores, bento shops (弁当屋, bentō-ya?) Bento can be elaborately arranged in a style called "kyaraben" ("character bento"). There are similar forms of boxed lunches in the Philippines (Baon), Korea (Dosirak), Taiwan (Biandang), and India (Tiffin). Umami. Tomatoes are rich in umami components A loanword from the Japanese (うま味?) 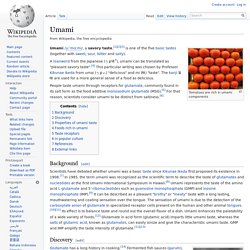 , umami can be translated as "pleasant savory taste".[4] This particular writing was chosen by Professor Kikunae Ikeda from umai (うまい) "delicious" and mi (味) "taste". The kanji 旨味 are used for a more general sense of a food as delicious. People taste umami through receptors for glutamate, commonly found in its salt form as the food additive monosodium glutamate (MSG).[5] For that reason, scientists consider umami to be distinct from saltiness.[6] Background[edit] Discovery[edit] Umami was first scientifically identified in 1908 by Kikunae Ikeda,[17] a professor of the Tokyo Imperial University. Professor Shintaro Kodama, a disciple of Ikeda, discovered in 1913 that dried bonito flakes contained another umami substance.[18] This was the ribonucleotide IMP. Properties of umami taste[edit] Umami has a mild but lasting aftertaste that is difficult to describe. Incredible Sushi Art. Our Amazing Food Art post was very popular and received a lot of great feedback. 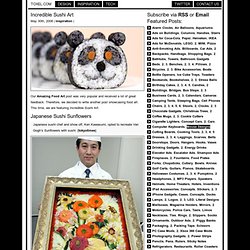 Therefore, we decided to write another post showcasing food art. Japanese food! Authentic, mostly healthy Japanese recipes for everyone. THE ART OF SUSHI. The History In Japanese culture, sushi is considered to be an art form because its appearance is just as important as how it tastes. 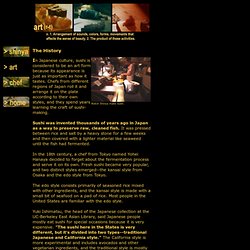 Chefs from different regions of Japan roll it and arrange it on the plate according to their own styles, and they spend years learning the craft of sushi-making. Sushi was invented thousands of years ago in Japan as a way to preserve raw, cleaned fish. It was pressed between rice and salt by a heavy stone for a few weeks and then covered with a lighter material like seaweed until the fish had fermented. In the 18th century, a chef from Tokyo named Yohei Hanaya decided to forget about the fermentation process and serve it on its own. The edo style consists primarily of seasoned rice mixed with other ingredients, and the kansai style is made with a small bit of seafood on a pad of rice. 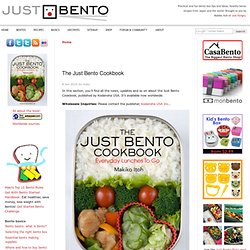 It’s available now worldwide. Wholesale Inquiries: Please contact the publisher, Kodansha USA Inc.. Availability (updated January 20, 2011) Amazon links (note that these are all affiliate links, except for Canada, which brings me a small commission besides what I got for writing the book ^_^;) Other sellers: Please ask at your local bookstore if they have the book in stock! It’s also available online or in-store where applicable from Barnes and Noble, Border’s, and Powell’s.

Signed copies During my recent book tour, I left a stack of signed copies at Kinokuniya in New York (off Bryant Park), Third Place Books in Lake Forest Park outside Seattle, and Kinokuniya Seattle (next to Uwajimaya). Reviews and press The book has been reviewed positively by several sources. Sushi Contemporary Performance & Visual Arts. A healthy meal in a box: great bento recipes, tips, and more.