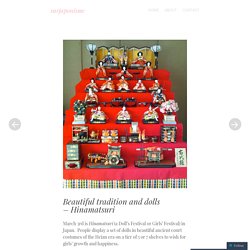 People display a set of dolls in beautiful ancient court costumes of the Heian era on a tier of 5 or 7 shelves to wish for girls’ growth and happiness. The above photo shows a seven-tiered Hina dolls and each tier holds the dolls representing the followings; 1. A Beginner's Pictorial Guide. Overview of a Shrine office. Guide on Sakura Season and Hanami “blossom-viewing” parties - Japan Guide.

Overview of a Shrine office. Japanese New Year Traditions お正月. こんにちは〜 \(◕ω◕)/♥ Do you know what Japanese people do on New Year’s day? 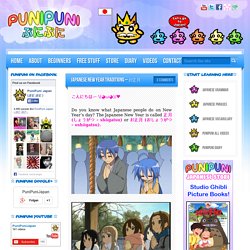 The Japanese New Year is called 正月 (しょうがつ – shōgatsu) or お正月 (おしょうがつ – oshōgatsu). On January first, it is customary to go to the local shrine or temple to wish for a good year. 108 Best Japanese Festivals. Japan » guide » japanese festival guide » matsuri rankings » matsuri list posted by John Spacey, Japan Talk, February 18, 2015 It's not known exactly how many Japanese festivals, or matsuri, are held each year. 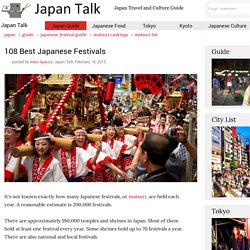 A reasonable estimate is 200,000 festivals. There are approximately 190,000 temples and shrines in Japan. Wear KIMONO : Kimono Slip - KIDORAKU Japan - What a Kimonoful World! You can click images and view larger version! 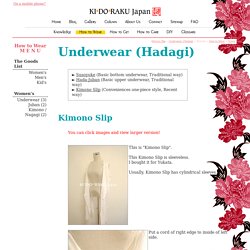 This is "Kimono Slip". This Kimono Slip is sleeveless. I bought it for Yukata. Usually, Kimono Slip has cylindrical sleeves. Put a cord of right edge to inside of left side. Tie cords. Put a cord of left edge to right side. Wear KIMONO : Hada-Juban - KIDORAKU Japan - What a Kimonoful World! Japanese New Year. New Year (shogatsu or oshogatsu) is the most important holiday in Japan. 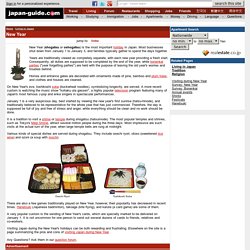 Most businesses shut down from January 1 to January 3, and families typically gather to spend the days together. Years are traditionally viewed as completely separate, with each new year providing a fresh start. Consequently, all duties are supposed to be completed by the end of the year, while bonenkai parties ("year forgetting parties") are held with the purpose of leaving the old year's worries and troubles behind. Oshogatsu definition of Oshogatsu in the Free Online Encyclopedia.

Type of Holiday:Calendar/SeasonalDate of Observation:January 1 Where Celebrated:JapanSymbols and Customs:Bells,Camellia,CraneandTortoise,Daruma,Dreams,Gifts,Kadomatsu,Manzai,Mochi,Narcissus,PlumBough,Rake,Shimenawa or Shimekazari,UtagarutaRelated Holidays:ChineseNewYear,Sol Several countries in Asia celebrate the new year at about the same time-including China, Japan, Korea, and Vietnam-and with many of the same customs, such as offerings to household god(s), housecleaning and new clothes, banquets, ancestor worship, and fireworks. 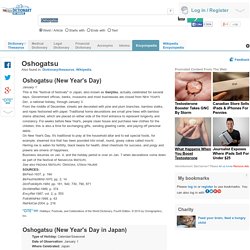 The date of the new year in the countries mentioned above is based on a lunisolar calendar, similar to or the same as the one used in China. The exception for this timing is Japan, which has employed the Gregorian calendar since 1873 and thus observes New Year's Day on January 1, though many older traditions remain. The Chinese lunisolar calendar is based on the oldest system of time measurement still in use. Tea Service at a Japanese Temple - Tea service More traditional rooms with garden views. 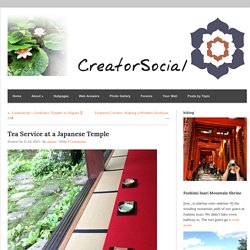 Wall scroll. Traditional for a tea room. The tea room from outside. You sit facing into the garden for maximum Japanese Zen Feelings. The meeting chamber. Visiting Gyokusenji Part 2 - Lotus blossom. 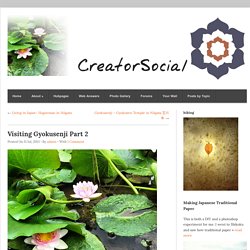 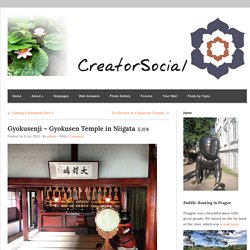 Single strand Persian wool, gold thread, on 18 mesh canvas, 24 3/4 x 13 3/8" Continental stitch in all four directions Approximately 107,254 stitches, 1989-91 & '95 The central design in KALACHAKRA is an adaptation of The All Powerful Ten Symbol associated with the Kalachakra Initiation of Tibetan Buddhism. 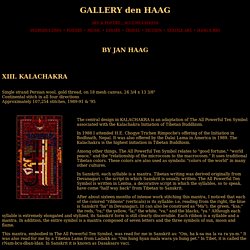 In 1988 I attended H.E. Chogye Trichen Rimpoche's offering of the Initiation in Bodhnath, Nepal. It was also offered by the Dalai Lama in America in 1989. The Kalachakra is the highest initiation in Tibetan Buddhism. Ninnaji_Kyoto16s3s4592.jpg (JPEG Image, 4592 × 3056 pixels) - Scaled (22%) Information, Prices & Booking. Welcome to Eko-in. A 1000 year-old Buddhist temple, Ekoin offers Japanese style guest rooms and one of them has a private bath and toilet.

All of the guest rooms have a garden view. Guests are free to attend morning services and the Goma fire ritual. Guests can participate in meditation sessions from 16:30. Sessions can be translated in English and English brochures are available if there is no interpreter. Facilities (click to expand) Guest Photos: You Must Be Logged In To Submit A Guest Review Ryokan Reviews: Wonderful place to stay. View topic - [Knowledge] - Occasions for Kimono. Seoulstar74 wrote: I'm confused about one part, though. It says that furisode are not appropriate for grauduation ceremony. What do girls wear to graduation then? The beauty of Kimono. Matsuri Japanese Festival. While there are matsuri (festivals) all year long in Japan, summer is when they’re at their peak. Like a local fair, the dates vary from place to place with many festivals celebrated at the city or even neighborhood level. Themes range from celebrating the harvest to remembering the dead.

Bon Odori is a matsuri that’s typically held during Obon (known as the ghost festival in other parts of Asia) where locals come out dressed in yukata (a light cotton kimono) and dance to the beat of a taiko drum. Japan Society: Tanabata Tutorial: 7 Ways To Wish Upon A Star. ПРАЗДНОВАНИЕ НОВОГО ГОДА ПО-ЯПОНСКИ. Types of Women's Kimono. Geisha & Maiko Information - Wafuku Kimono Information 6. Kimono Market sakura / obi belt for women. Yukata Kimono Market Sakura. YUKATA. Well I finally bought Yukata, Obi, and the sandals called Geta. Now buying one ranges from how detailed you want it so about $60 to $100+( I bought my whole set for $100). The shop keeper said that most Japanese women get a dark yukata/kimono that make them stand out and he, said "that it work great for me as well.

Japan Navigator: The Gardens of Jonangu (Kyoto, Gardens, Shrines) The site of the Jonangu Shrine, one the east bank of the Kamo River in what is now the southern part of Kyoto, once was the extensive Detached Palace Emperor Shirakawa and his successors. When the palace was built in the 11th century, it stood in a pastoral river landscape south of the capital. 01efuda_a_e.pdf. Obon: The day the dead meet up with the living.

Say middle of August in Japan and it means just one thing: Obon. The Japanese may well be workaholics who rarely take long holidays but it’s still customary to take a week off work at both New York and Obon. Though more and more people who live in the big cities no longer celebrate Obon properly, instead using the time for a “summer holiday”, Obon was originally a festival intermingled with the folk beliefs unique to Japan. Hina Matsuri in Japan. Doll Festival. All Areas Festivals Japan Festivals Festivals in March. 5 Favorite Obon Festivals. The Japanese Buddhist celebration, Obon, is devoted to honoring the spirits of the dead. Obon: Japan Welcomes the Ancestors (And Other Spirits Too)