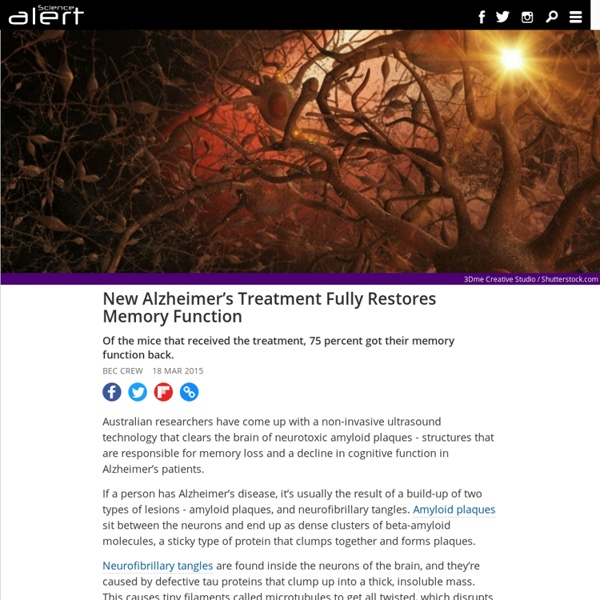 Australian researchers have come up with a non-invasive ultrasound technology that clears the brain of neurotoxic amyloid plaques - structures that are responsible for memory loss and a decline in cognitive function in Alzheimer’s patients. If a person has Alzheimer’s disease, it’s usually the result of a build-up of two types of lesions - amyloid plaques, and neurofibrillary tangles. Amyloid plaques sit between the neurons and end up as dense clusters of beta-amyloid molecules, a sticky type of protein that clumps together and forms plaques. Neurofibrillary tangles are found inside the neurons of the brain, and they’re caused by defective tau proteins that clump up into a thick, insoluble mass. This causes tiny filaments called microtubules to get all twisted, which disrupts the transportation of essential materials such as nutrients and organelles along them, just like when you twist up the vacuum cleaner tube. You can hear an ABC radio interview with the team here.

A Bioengineered 'Pancreas' Has Ended One Diabetic's Need For Insulin In Brief A year after receiving a new type of islet cell transplant to treat her severe diabetes, a patient continues to do well and no longer needs insulin injections to manage her disease. A Happy Anniversary Memory Loss From Alzheimer’s Reversed For First Time With New Approach — PsyBlog Nine out of ten patients with memory problems showed improvements with this novel multi-systems approach. Memory loss in patients with Alzheimer’s disease may be reversed — and the improvement sustained — using a novel treatment approach, a small exploratory study has found. The study, which included 10 patients, used a combination of therapies which were personalised to help them reverse memory loss (Bredesen, 2014).

Neuroception: A Subconscious System for Detecting Threats and Safety • Neuroception describes how neural circuits distinguishwhether situations or people are safe, dangerous,or life threatening.• Neuroception explains why a baby coos at a caregiverbut cries at a stranger, or why a toddler enjoysa parent’s embrace but views a hug from a strangeras an assault.• The Polyvagal Theory describes three developmentalstages of a mammal’s autonomic nervous system:Immobilization, mobilization, and social communicationor social engagement.• Faulty neuroception might lie at the root of severalpsychiatric disorders, including autism, schizophrenia,anxiety disorders, depression, and ReactiveAttachment Disorder. 33 blood-cancer patients have dramatic clinical remission with new T-cell therapy Image of a group of killer T cells (green and red) surrounding a cancer cell (blue, center) (credit: NIH) Chinese doctors have reported success with a new type of immunotherapy for multiple myeloma*, a blood cancer: 33 out of 35 patients in a clinical trial had clinical remission within two months. The researchers used a type of T cell called “chimeric antigen receptor (CAR) T.”** In a phase I clinical trial in China, the patient’s own T cells were collected, genetically reprogrammed in a lab, and injected back into the patient.

NTU scientists discover new treatment for dementia Pushing new frontiers in dementia research, Nanyang Technological University, Singapore (NTU Singapore) scientists have found a new way to treat dementia by sending electrical impulses to specific areas of the brain to enhance the growth of new brain cells. Known as deep brain stimulation, it is a therapeutic procedure that is already used in some parts of the world to treat various neurological conditions such as tremors or Dystonia, which is characterised by involuntary muscle contractions and spasms. NTU scientists have discovered that deep brain stimulation could also be used to enhance the growth of brain cells which mitigates the harmful effects of dementia-related conditions and improves short and long-term memory.

Stephen W. Porges, PhD: Q&A About Freezing, Fainting, and the ‘Safe’ Sounds of Music Therapy Early humans stalked by brutal killers had a limited choice: Gird for battle or run to safety — as in “fight-or-flight.” A bit further down the evolutionary road, we added “tend and befriend” to our danger response repertoire, which may have allowed particularly the females among us to protect children and cultivate a social group for mutual defense and support. And that was that — until Stephen Porges, PhD, the Distinguished University Scientist at Indiana University in Bloomington, introduced a third option: freeze or faint. His widely-cited polyvagal theory contends that living creatures facing or sensing mortal danger will immobilize, even “play dead,” as a last resort. This strategy occurs instinctively — without conscious thought and at the behest of a nervous system quickly deciding whether the environment is dangerous or safe. The only cure, Dr.

Deadly gene mutations removed from human embryos in landmark study Scientists have modified human embryos to remove genetic mutations that cause heart failure in otherwise healthy young people in a landmark demonstration of the controversial procedure. It is the first time that human embryos have had their genomes edited outside China, where researchers have performed a handful of small studies to see whether the approach could prevent inherited diseases from being passed on from one generation to the next. While none of the research so far has created babies from modified embryos, a move that would be illegal in many countries, the work represents a milestone in scientists’ efforts to master the technique and brings the prospect of human clinical trials one step closer. The work focused on an inherited form of heart disease, but scientists believe the same approach could work for other conditions caused by single gene mutations, such as cystic fibrosis and certain kinds of breast cancer.

Researchers have devised a treatment called MEND to reverse Alzheimer’s in Early-stage patients. The human toll is evident. Patients knowing they are going to progressively lose their minds, functionality, and their very lives, must somehow learn to live with the horrifying diagnosis of Alzheimer’s. Meanwhile their families shoulder the burden of care, and the anguish of knowing that someday they will no longer be recognized. Around 5.4 million Americans currently live with this neurodegenerative disorder. This is the sixth most common cause of death in the U.S. Framework for Information Literacy for Higher Education Filed by the ACRL Board on February 2, 2015. Adopted by the ACRL Board, January 11, 2016. This work is licensed under a Creative Commons Attribution-NonCommercial-ShareAlike 4.0 International License. PDF Version Print copies may be purchased from the Association of College and Research Libraries for $15.00 for a package of 10, including standard postage.

CRISPR Skin Grafts Could Replace Insulin Shots For Diabetes The Potential of CRISPR The potential of the gene editing tool CRISPR just seems to keep growing and growing, and the latest experimental use of the technology is creating skin grafts that trigger the release of insulin and help manage diabetes. Researchers have successfully tested the idea with mice that gained less weight and showed a reversed resistance to insulin because of the grafts (high insulin resistance is a common precursor to type 2 diabetes). In fact, the team from the University of Chicago says the same approach could eventually be used to treat a variety of metabolic and genetic conditions, not just diabetes – it’s a question of using skin cells to trigger different chemical reactions in the body.

What does an 87% accurate Alzheimer's test mean? Not much without positive predictive value. What does it mean to say that a new test is 87% accurate? I think most journalists writing about a paper published in the journal Alzheimer’s & Dementia could not satisfactorily answer that question – about a statistic they repeatedly quoted in stories about that paper. The answer is: Not much, if you don’t take positive predictive value into account. LifeMoves - PrioHealth “I have been an Occupational Therapist for 38 years. I have worked with people of various abilities and disabilities, ranging in age from 3 months to 101 years, and across clinical settings to include an acute care setting (hospital), nursing home (pediatric), nursing home (geriatric), home care (pediatric and geriatric) and school settings. In all that time, and across all ages, settings, and abilities, the key component of successful therapy intervention is for the client to be able to focus on treatment. Without focus, learning cannot take place, and re-learning (rehabilitation) is compromised. The brain requires focus to hard-wire neurons in order to get reliable, automatic cognitive and motor responses to the environment.