Looking for men who had Hyperthermia Treatment for Prostate Cancer - Prostate Cancer. Yeah, a #16 catheter is pretty large, when I was going through my stage of 21 catheters over 1 1/2 years total time, they had had hard time even with a #14 with me. 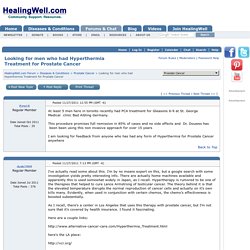 My uro wanted the #16, since I was undergoing endless stricture issues, but even being put under, he was unable to fit it. Very interesting treatment method being talked about here, not one I am familiar with. Good luck to all of you that have underwent that method. david Age: 60, 56 at PC dx, PSA 16.33rd Biopsy: 9/8 7 of 7 Positive, 40-90%, 4+3open RP: 11/8, Catheter in 63 daysPath Rpt: 3+4, pT2c, 42g, 20% tumor, 1 pos margin Incont & ED: NoneSurgery Failed, recurrence within 9 monthsSalvage Radiation 10/9-11/9, SRT failed within 9 months, PSA 4/12 = 37.xSpent total of 1 ½ years on 21 catheters, Ileal Conduit Surgery 9/10,7 other PC-related surgeriesMember of Prostate Cancer & Chronic Pain HW Communities since 10/2008“I live in the weak and the wounded” – Session Nine (Movie) Trans-urethral prostate hyperthermia treatment offers 100% response rate. During a routine physical in September 2006, retired airline pilot Jeff Albulet's doctor thought he 'felt something' when he did a digital rectal exam, although Jeff's prostate specific antigen (PSA) was only 2. 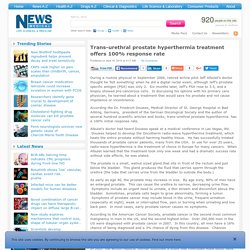 Six months later, Jeff's PSA rose to 3.5, and a biopsy showed pre-cancerous cells. In discussing his options with his primary care physician, he learned about a treatment that would save his prostate and not cause impotence or incontinence. According the Dr. Friedrich Douwes, Medical Director of St. George Hospital in Bad Aibling, Germany, president of the German Oncological Society and the author of several hundred scientific articles and books, trans-urethral prostate hyperthermia has a 100% initial response rate. Albulet's doctor had heard Douwes speak at a medical conference in Las Vegas, NV. The prostate is a small, walnut sized gland that sits in front of the rectum and just below the bladder. As early as age 40, the prostate may increase in size. 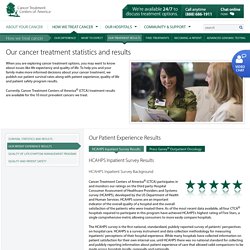 HCAHPS scores are an important indicator of the overall quality of a hospital and the overall satisfaction of the patients who were treated there. As of the most recent data available, all four CTCA® hospitals required to participate in this program have achieved HCAHPS’s highest rating of Five Stars, a single comprehensive metric allowing consumers to more easily compare hospitals. The HCAHPS survey is the first national, standardized, publicly reported survey of patients' perspectives on hospital care. 1 When CTCA HCAHPS scores are published on the CMS website, HospitalCompare.gov, they may differ slightly from the data presented on the following pages. 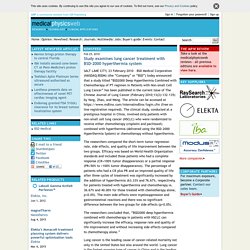 The article can be accessed at (free on line registration required). The clinical study, conducted at a prestigious hospital in China, involved sixty patients with non-small cell lung cancer (NSCLC) who were randomized to receive either chemotherapy (cisplatin and paclitaxel) combined with hyperthermia (delivered using the BSD-2000 Hyperthermia System) or chemotherapy without hyperthermia. The researchers compared the short-term tumor regression rate, side effects, and quality of life improvement between the two groups.

About the Researchers. Untitled. NCT02409108 Clinical Trial. Basic Trial Information Trial Description Summary This phase I trial studies the side effects and safety of a device called Exatherm total-body hyperthermia (TBH) in treating patients with stage III-IV non-small cell lung cancer that has progressed or cannot be removed by surgery. 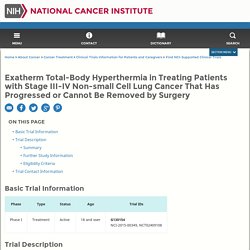 Hyperthermia may kill or damage tumor cells by heating them to several degrees above normal body temperature. Exatherm-TBH is a device that heats the blood and then delivers it back to the patient and may work better to deliver hyperthermia treatment. Further Study Information I. I. II. Hyperthermia in Cancer Treatment. Radiation Oncology : Hyperthermia. Hyperthermia. 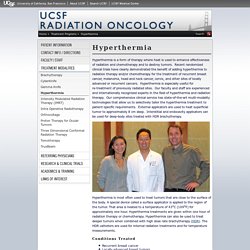 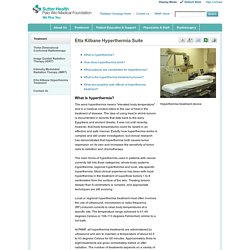 The word hyperthermia means "elevated body temperature" and in a medical context refers to the use of heat in the treatment of disease. The idea of using heat to shrink tumors is documented in records that date back to the early Egyptians and ancient Greeks. It was not until recently, however, that body temperatures could be raised in an effective and safe manner.

Exactly how hyperthermia works is complex and still under investigation, but clinical research has demonstrated that hyperthermia both causes tumor regression on its own and increases the sensitivity of tumor cells to radiation and chemotherapy. Hyperthermia Treatment at our Arizona Cancer Center. Home | Treatment Methods | Hyperthermia In most countries of the world, hyperthermia is considered the 4th major modality of cancer therapy along with surgery, chemotherapy, and radiation. 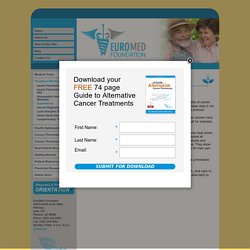 Only in the United States does it not have that status; here it is used only as part of an alternative cancer treatment protocol. Hyperthermia generates heat to create more blood supply to the area. Because cancers have such a high rate of metabolism, when they are warmed up with far infrared heat for example, they literally over-metabolize themselves to death. Some cancers are associated with viruses. Hyperthermia Treatment at our Arizona Cancer Center. Hyperthermia for treating cancer - Thomas Jefferson University Hospitals. 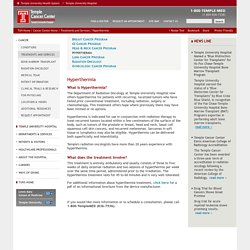 The Department of Radiation Oncology at Temple University Hospital now offers hyperthermia for patients with recurring, localized tumors who have failed prior conventional treatment, including radiation, surgery or chemotherapy. Hyperthermia to Treat Cancer. Hyperthermia means a body temperature that is higher than normal. 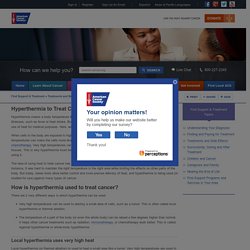 High body temperatures are often caused by illnesses, such as fever or heat stroke. But hyperthermia can also refer to heat treatment – the carefully controlled use of heat for medical purposes. Here, we will focus on how heat is used to treat cancer. When cells in the body are exposed to higher than normal temperatures, changes take place inside the cells. Warmer temperatures can make the cells more likely to be affected by other treatments such as radiation therapy or chemotherapy.

The idea of using heat to treat cancer has been around for some time, but early attempts had mixed results. UCSF Radiation Oncology : Hyperthermia. UCSF Radiation Oncology : Contact Info / Directions. Hyperthermia in Cancer Treatment. The Strongest Alternative Cancer Treatments At Clinics. Introduction In this article there are short discussions of alternative cancer treatments considered by the ICRF to be among the most potent of the alternative cancer treatments which are done at clinics.

It should be mentioned that there are several very good alternative cancer clinics which have developed their own protocols for cancer. Just because the treatments used by these clinics are not listed here is not necessarily an indication they are weak treatments. The reader will have to decide for themselves whether they are strong treatments.