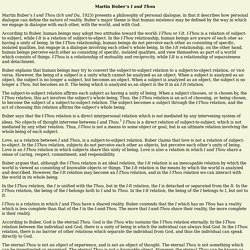 Buber’s major theme is that human existence may be defined by the way in which we engage in dialogue with each other, with the world, and with God. According to Buber, human beings may adopt two attitudes toward the world: I-Thou or I-It. Gestalt Therapy: Boundary Disturbances Flashcards. Gestalt Therapy: Boundary Disturbances Flashcards. Gestalt Personality Theory Concepts. Gestalt Personality Theory Concepts When there are disturbances in the contact boundaries, several difficulties result.

Self-Awareness Exercises - Gestalt "I Should" Exercise. Last week, I talked about self-awareness tools such as the MBTI, the Enneagram, and the Via survey of signature strengths. 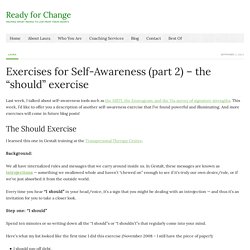 This week, I’d like to offer you a description of another self-awareness exercise that I’ve found powerful and illuminating. And more exercises will come in future blog posts! The Should Exercise I learned this one in Gestalt training at the Transpersonal Therapy Centre. Background: We all have internalized rules and messages that we carry around inside us. Every time you hear “I should” in your head/voice, it’s a sign that you might be dealing with an introjection — and thus it’s an invitation for you to take a closer look. Step one: “I should” Spend ten minutes or so writing down all the “I should”s or “I shouldn’t”s that regularly come into your mind.

Rational-Emotive-Cognitive. Psy460 Ch08 Handout ppt. Techniques in Gestalt Therapy: Exercises and Experiments. Gestalt Contact and Boundary Disturbances. According to Gestalt Therapy Theory, Contact is the awareness of the meeting of differences. 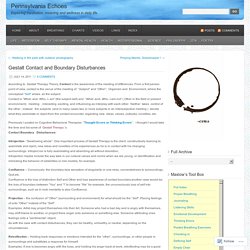 From a first person point of view, contact is the venue of the meeting of “Subject” and “Other“; Organism and Environment, where the conceptual “Self” arises. as the subject. Contact is “What- and- Who- I- am” (the subject self) and “What -and- Who- I-am-not” ( Other in the field or present environment) meeting , interacting ,exciting, and influencing as interplay with each other. Neither takes control of the other , instead the subjects (and in many cases two or more subjects in an intersubjective meeting ) decide what they assimilate or reject from the contact encounter, regarding new ideas, values, outlooks, novelties, etc.

Previously I posted on Cognitive Behavioral Therapies “Thought Errors or Thinking Errors“. Introjection In Gestalt - Evolution Counseling. Introjection is a resistance that occurs between sensation and awareness in the needs satisfaction cycle. 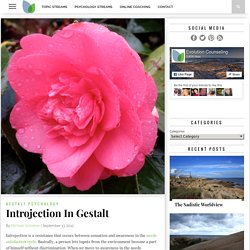 Basically, a person lets inputs from the environment become a part of himself without discrimination. When we move to awareness in the needs satisfaction cycle it is because we notice a change in our equilibrium with the environment. I suddenly recognize that I feel hungry, or scared, or sad, or lonely, for example. Once I am consciously aware of the fact I can do something about it, which means moving through the subsequent stages of the cycle until reaching completion and withdrawal. Introjection means you have not yet reached the stage of awareness. Most people don’t spend a lot of time analyzing where their values and beliefs come from. People who have introjected most of their values and beliefs usually make terrible travelers because they feel threatened by different ways of living and being. 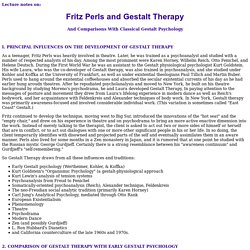 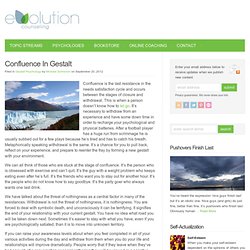 This is when a person doesn’t know how to let go. It’s necessary to withdraw from an experience and have some down time in order to recharge your psychological and physical batteries. After a football player has a huge run from scrimmage he is usually subbed out for a few plays because he’s tired and has to catch his breath. Metaphorically speaking withdrawal is the same. It’s a chance for you to pull back, reflect on your experience, and prepare to reenter the fray by forming a new gestalt with your environment. 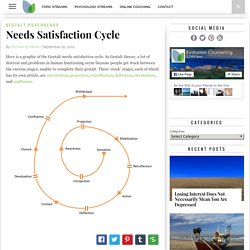 Gestalt. The word Gestalt is used in modern German to mean the way a thing has been; i.e., “placed,” or “put together.” 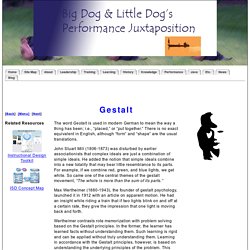 There is no exact equivalent in English, although “form” and “shape” are the usual translations. John Stuart Mill (1806-1873) was disturbed by earlier associationists that complex ideals are just a combination of simple ideals. He added the notion that simple ideals combine into a new totality that may bear little resemblance to its parts. For example, if we combine red, green, and blue lights, we get white. Retroflection In Gestalt - Evolution Counseling : Evolution Counseling. The Gestalt resistance between the stages of mobilization and action is retroflection. 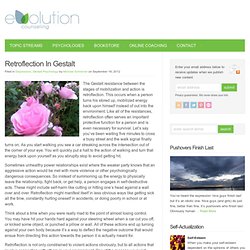 This occurs when a person turns his stored up, mobilized energy back upon himself instead of out into the environment. Like all of the resistances, retroflection often serves an important protective function for a person and is even necessary for survival. Let’s say you’ve been waiting five minutes to cross a busy street and the walk signal finally turns on. As you start walking you see a car streaking across the intersection out of the corner of your eye. You will quickly put a halt to the action of walking and turn that energy back upon yourself as you abruptly stop to avoid getting hit.

Sometimes unhealthy power relationships exist where the weaker party knows that an aggressive action would be met with more violence or other psychologically dangerous consequences. Think about a time when you were really mad to the point of almost losing control. Therapy: An Introduction. Internet search engines offer this as one of the top results when you search for Gestalt Therapy. For some reason, they rank it even higher than the home page for the site where it appears, The Gestalt Therapy Page. What is Gestalt therapy? A practice of developing awareness. Some thoughts about what Gestalt therapy is.

“The primary aim of Gestalt counselling and therapy is the development of awareness through a sustained enquiry into clients’ subjective experience.” (Mackewn, 1997, p.34) “It is this ongoing experience of awareness that can be enormously healing in counselling.” (Joyce & Sills, 2001, p.28) Theory of Gestalt therapy. Concepts and history of Gestalt psychology. Gestalt approach. Paradoxical Theory of Change. Although brief, the "Paradoxical Theory of Change" is, outside of the works of Frederick Perls, the most frequently referenced article in the body of Gestalt therapy literature. Written in 1970, it originally appeared in Fagan and Shepherd's Gestalt Therapy Now, a publication of The Gestalt Journal Press. For ordering information, visit the Press bookstore at www.gjpstore.com.

The German word cannot be translated into an equivalent, single English term. Contact Cycle. Based on reading from Gestalt Counselling in Action by Petruska Clarkson Different reading have given variations on the phrasing or naming of the turn around of events or experiences that make up the phases of contact by the self with the environment. Additionally the full context and meaning is better brought out in consideration of the creative-adjustment styles in this cycle, so read in conjunction withCycle Disturbance Sensation At the point where the self is balanced, between cycles, after completion and prior to the next fore-contact there is either internal or external disturbances will impinge upon the self heralding the start of the figure/background formation process. The self feels, senses, (a) disturbance, a change of status and so (a) figure forms to the fore front.