Cancer. Another mechanism discovered by which sulforaphane prevents cancer. CORVALLIS, Ore. – Researchers in the Linus Pauling Institute at Oregon State University have discovered yet another reason why the “sulforaphane”compound in broccoli and other cruciferous vegetables is so good for you – it provides not just one, but two ways to prevent cancer through the complex mechanism of epigenetics. 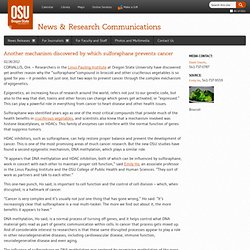 Epigenetics, an increasing focus of research around the world, refers not just to our genetic code, but also to the way that diet, toxins and other forces can change which genes get activated, or “expressed.” This can play a powerful role in everything from cancer to heart disease and other health issues. Sulforaphane was identified years ago as one of the most critical compounds that provide much of the health benefits in cruciferous vegetables, and scientists also knew that a mechanism involved was histone deacetylases, or HDACs. 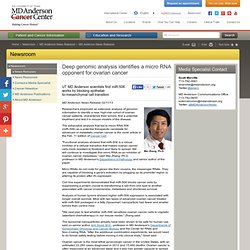 Researchers employed an extensive analysis of genomic information to identify a new, high-risk cohort of ovarian cancer patients, characterize their tumors, find a potential treatment and test it in mouse models of the disease. The exhaustive analysis that led to micro RNA 506 (miR-506) as a potential therapeutic candidate for advanced or metastatic ovarian cancer is the cover article in the Feb. 11 edition of Cancer Cell. "Functional analysis showed that miR-506 is a robust inhibitor of a cellular transition that makes ovarian cancer cells more resistant to treatment and likely to spread.

Researchers develop new generation visual browser of epigenome. ChroGPS is a software application that serves to facilitate the analysis and understanding of epigenetic data and to extract intelligible information, which can be downloaded free of charge in Bioconductor (www.bioconductor.org), a reference repository for biocomputational software. 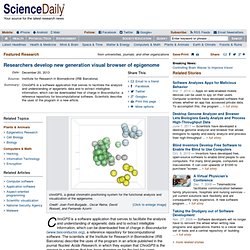 The scientists at the Institute for Research in Biomedicine (IRB Barcelona) describe the uses of the program in an article published in the journal Nucleic Acids Research, in which they explain that ChroGPS is the answer to a problem that has been dragging on for the last ten years. In the last 15 years, researchers worldwide have generated a large amount of information about the epigenome: proteins, factors and epigenetic markers which, when bound to DNA, regulate gene expression. "With ChroGPS we wanted to integrate epigenetic data with genetic data to reap the great benefits from them and to be able to understand this information. New Research Shows Childhood Adversity Causes Changes in Genetics - Providence, Rhode Island. PROVIDENCE, RI – In a look at how major stressors during childhood can change a person's biological risk for psychiatric disorders, researchers at Butler Hospital have discovered a genetic alteration at the root of the association. 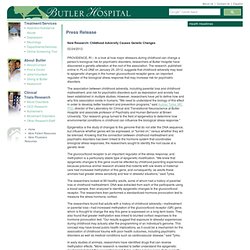 The research, published online in PLoS ONE on January 25, 2012, suggests that childhood adversity may lead to epigenetic changes in the human glucocorticoid receptor gene, an important regulator of the biological stress response that may increase risk for psychiatric disorders. The association between childhood adversity, including parental loss and childhood maltreatment, and risk for psychiatric disorders such as depression and anxiety has been established in multiple studies. However, researchers have yet to define how and why this association exists in humans. Epigenetics is the study of changes to the genome that do not alter the DNA sequence, but influence whether genes will be expressed, or "turned on," versus whether they will be silenced.

Changes in Gene Expression May Help Explain High Blood Pressure in Pregnancy. Thursday, April 12, 2012 Virginia Commonwealth University School of Medicine researchers have discovered that changes in the gene expression of a key enzyme may contribute to high blood pressure and increase susceptibility to forming blood clots in pregnant women with preeclampsia. 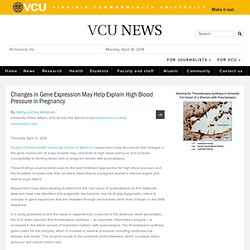 These findings could provide clues to the best treatment approaches for high blood pressure and the formation of blood clots that can block blood flow to a pregnant woman’s internal organs and lead to organ failure. Researchers have been working to determine the root cause of preeclampsia on the molecular level and have now identified that epigenetic mechanisms may be at play. Epigenetics refers to changes in gene expression that are mediated through mechanisms other than changes in the DNA sequence. Read the study here. Ageing genes discovered. Ageing genes discovered Posted on 20/04/2012 Researchers identify key genes that switch off with ageing, highlighting them as potential targets for anti-ageing therapies. 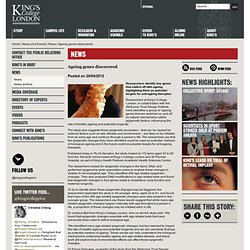 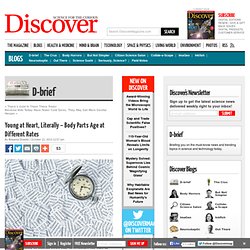 Researchers have found a new biological clock in human DNA that determines the rate at which bodily tissues age—revealing some surprising things about which parts of our bodies feel the brunt of aging soonest, and how such aging may eventually be reversed. Starvation hormone markedly extends mouse life span, UTSW researchers report - October 2012 News Releases - UT Southwestern. Drs. 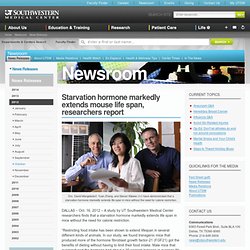 David Mangelsdorf, Yuan Zhang, and Steven Kliewer (l-r) have demonstrated that a starvation hormone markedly extends life span in mice without the need for calorie restriction. Zinc Fingers: a new tool to fight against Huntington's Disease. Printer friendly version Share 10 October 2012 Centre for Genomic Regulation Huntington's disease (HD) is an inherited genetic disorder caused by the multiple repetition of a DNA sequence (the nucleotides CAG) in the gene encoding a protein called "Huntingtin". 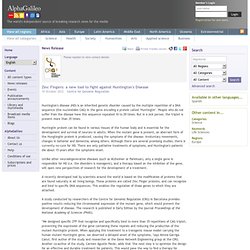 People who do not suffer from the disease have this sequence repeated 10 to 29 times. But in a sick person, the triplet is present more than 35 times. Epigenetic Changes May Explain Chronic Kidney Disease, Penn Study Shows. PHILADELPHIA – The research of physician-scientist Katalin Susztak, MD, PhD, associate professor of Medicine in the Renal Electrolyte and Hypertension Division, at the Perelman School of Medicine, University of Pennsylvania, strives to understand the molecular roots and genetic predisposition of chronic kidney disease. 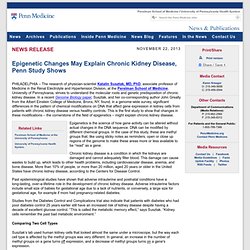 In a recent Genome Biology paper, Susztak, and her co-corresponding author John Greally from the Albert Einstein College of Medicine, Bronx, NY, found, in a genome-wide survey, significant differences in the pattern of chemical modifications on DNA that affect gene expression in kidney cells from patients with chronic kidney disease versus healthy controls. The ribosome – a new target for antiprion medicines. Printer friendly version Share 02 July 2013 Uppsala Universitet New research results from Uppsala University, Sweden, show that the key to treating neurodegenerative prion diseases such as mad cow disease and Creutzfeldt-Jakob disease may lie in the ribosome, the protein synthesis machinery of the cell.

The results were recently published in the Journal of Biological Chemistry. Getting to grips with migraine - Wellcome Trust Sanger Institute. Metabolic shift may train immune cells.