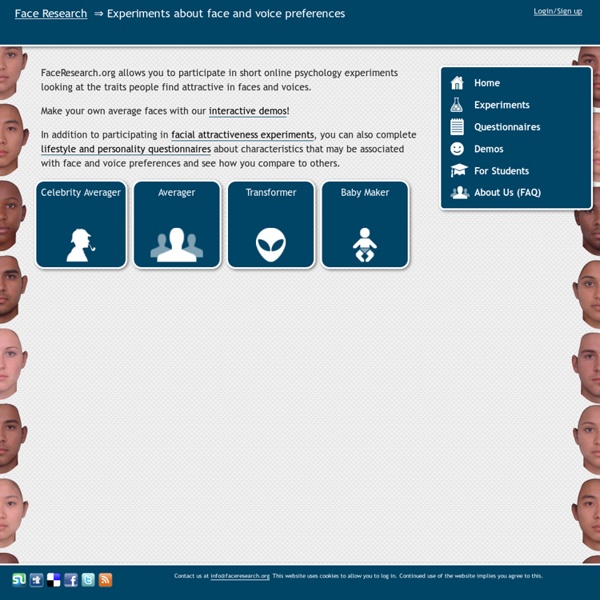 FaceResearch.org allows you to participate in short online psychology experiments looking at the traits people find attractive in faces and voices. Make your own average faces with our interactive demos! In addition to participating in facial attractiveness experiments, you can also complete lifestyle and personality questionnaires about characteristics that may be associated with face and voice preferences and see how you compare to others.

Collection Of Very Rare Optical Illusion To Hypnotize You Home » Odd Stuff » Collection Of Very Rare Optical Illusion To Hypnotize You Illusions are always mind freaking. An optical illusion (also called a visual illusion) is characterized by visually perceived images that differ from objective reality. The information gathered by the eye is processed in the brain to give a perception that does not tally with a physical measurement of the stimulus source. There are three main types: literal optical illusions that create images that are different from the objects that make them, physiological ones that are the effects on the eyes and brain of excessive stimulation of a specific type (brightness, colour, size, position, tilt, movement), and cognitive illusions, the result of unconscious inferences.

NSA Devises Radio Pathway Into Computers not connected to the internet By DAVID E. SANGER and THOM SHANKER WASHINGTON — The National Security Agency has implanted software in nearly 100,000 computers around the world that allows the United States to conduct surveillance on those machines and can also create a digital highway for launching cyberattacks. While most of the software is inserted by gaining access to computer networks, the N.S.A. has increasingly made use of a secret technology that enables it to enter and alter data in computers even if they are not connected to the Internet, according to N.S.A. documents, computer experts and American officials. The technology, which the agency has used since at least 2008, relies on a covert channel of radio waves that can be transmitted from tiny circuit boards and USB cards inserted surreptitiously into the computers.

Social Psychology Experiments - Explaining Human Nature. Social psychology experiments can explain how thoughts, feelings and behaviors are influenced by the presence of others. This article is a part of the guide: Discover 27 more articles on this topic Browse Full Outline The Ten Most Revealing Psych Experiments Psychology is the study of the human mind and mental processes in relation to human behaviors - human nature. Due to its subject matter, psychology is not considered a 'hard' science, even though psychologists do experiment and publish their findings in respected journals. Some of the experiments psychologists have conducted over the years reveal things about the way we humans think and behave that we might not want to embrace, but which can at least help keep us humble.

Top 15 Useless websites on Earth to kill your time and the Award Goes to Feeling Bored and want to kill some time. Here are the list of 25 useless websites to do that. Before seeing them i never knew they really existed. Just Check out the list of Top useless websites on earth which make you wonder why the hell they are made and who made them. No Matter what you think about them after visiting their URL, but, they are still there.

The 3 rules of a secure cell phone Big brother is coming after your phone. The government is increasingly interested in your calls, your movements, and your purchases. Don’t believe me? They don’t even need a warrant to seize your records anymore: Pamela Meyer: How to Spot a Liar TED and The Huffington Post are excited to bring you TEDWeekends, a curated weekend program that introduces a powerful "idea worth spreading" every Friday, anchored in an exceptional TEDTalk. This week's TEDTalk is accompanied by an original blog post from the featured speaker, along with new op-eds, thoughts and responses from the HuffPost community. Watch the talk above, read the blog post and tell us your thoughts below. Become part of the conversation! Watch Pamela Meyer's talk above about the science of "lie spotting" and how it can lead to a more honest world.

Electrophysiological Evidence of Intuition Part 1 - The Surprising Role of the Heart Rollin McCraty, Ph.D.1, Mike Atkinson1, and Raymond Trevor Bradley, Ph.D.2 1 HeartMath Research Center, Institute of HeartMath, Boulder Creek, California. 2 Institute for Whole Social Science, Carmel, California. Journal of Alternative and Complementary Medicine 2004; 10(1): 133-143. For a PDF version of the complete paper, click here. Objectives: This study aims to contribute to a scientific understanding of intuition, a process by which information normally outside the range of conscious awareness is perceived by the psychophysiological systems. The first objective, presented in two empirical papers (Part 1 and Part 2), was to replicate and extend the results of previous experiments demonstrating that the body can respond to an emotionally arousing stimulus seconds before it is actually experienced.