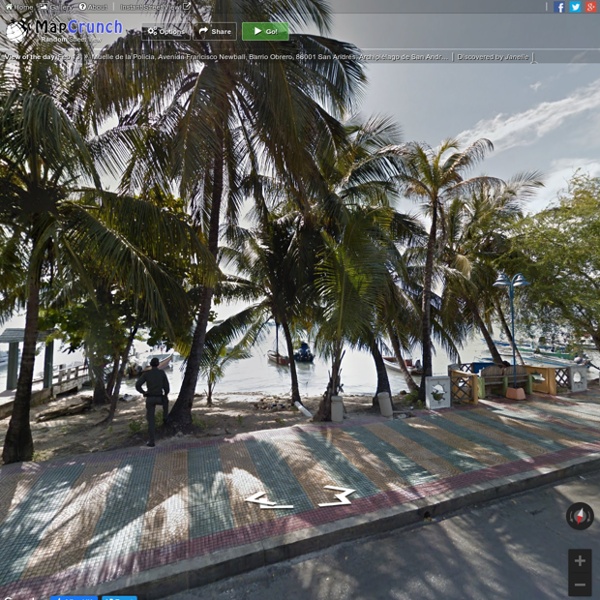 Explore the world via Google Street View. MapCrunch teleports you to a random place in the world. Discover the vast array of imagery captured by Google in 50 countries, featuring spectacular scenery, magical moments and the utterly unexplainable. The best views are added to the Gallery every day. How to use Click the button to show a random Street View from somewhere in the world.

The Wonder of Ice Caves Where you have lava tubes or limestone passage ways below the ground, occasionally a rare form of cave evolves – the . Strange, mysterious and often dangerous they are often difficult to get to and so not seen by huge amounts of people. Take a short tour in to the magical world of the ice cave. Size, of course, is not everything but let’s start with the largest ice cave on the planet.

Dishonored Dishonored is a 2012 stealth action-adventure video game developed by Arkane Studios and published by Bethesda Softworks. It was released worldwide in October 2012 for Microsoft Windows, PlayStation 3, and Xbox 360. Set in the fictional, plague-ridden industrial city of Dunwall, Dishonored follows the story of Corvo Attano, bodyguard to the Empress of the Isles.

Westmoreland County Tax Maps The Westmoreland County Department of Geographic Information Systems helps Westmoreland County to fulfill a statutory requirement that all taxable property needs to be mapped to aid in the tax assessment process. Using cutting age technology, Westmoreland GIS is able to provide a layout of properties, at and below the surface, both in the past and present. This information is made available in a variety of formats to the paying and public requestors via the GIS Tax Mapping website and a secure file transfer site. Tools for Creating, Hosting, and Printing Infographics About a week I was asked if I could write a post about tools for making infographics with students. A well constructed infographic can convey a lot of information in a compact, visually-pleasing manner. The process of creating a good infographic requires students to analyze and succinctly summarize data and facts that they've gathered through research. Here are some good tools that students can use to create infographics. Canva is always the first tool that comes to mind when I'm asked about creating infographics. Canva offers a large variety of templates for creating infographics.

A Real Map of the Middle East Could this map be any more different from the previous one discussed on this blog? That one dealt with the water, wetlands and shifting shorelines of Louisiana. This one zooms in on lines in the sand of the Middle-Eastern desert.

Astronomy Picture of the Day Discover the cosmos! Each day a different image or photograph of our fascinating universe is featured, along with a brief explanation written by a professional astronomer. 2016 April 15 73 Re-colors of HA2D Hair-01M_Basic (MESH NOT-INCLUDED) Home | Download | Discussion | Help | Site Map | New Posts | Sign in Sign in Mod The Sims Sign in to Mod The Sims

The Map Room The Map Room is a blog that points to maps, map collections, map-related resources, and material about maps on the web. Anything that fits under that rubric, from medieval mappæ mundi to satellite imagery, and from topo maps to Tolkien, is fair game. Launched in March 2003, The Map Room is aimed at a broad audience. Created equal – Contrasts of Life, Beautiful photography project by Mark Laita “Created Equal” is an amazing photo project of photographer Mark Laita that focuses on the contrasts between people, the lives and cultures through beautiful portraits in black and white.

42 maps that explain World War II by Timothy B. Lee on November 13, 2014 World War II was a great tragedy, claiming 60 million lives and throwing millions more into turmoil. An Animated Video of The Scream - this is Truly Amazing! Wow! This is simply amazing. I can’t put into words how good this video is! It’s surreal. New York Public Library Puts 20,000 Hi-Res Maps Online & Makes Them Free to Download and Use When I was a kid, my father brought home from I know not where an enormous collection of National Geographic magazines spanning the years 1917 to 1985. I found, tucked in almost every issue, one of the magazine’s gorgeous maps—of the Moon, St. Petersburg, the Himalayas, Eastern Europe’s ever-shifting boundaries. I became a cartography enthusiast and geographical sponge, poring over them for years just for the sheer enjoyment of it, a pleasure that remains with me today.

Ok, here's how you play this : 1) Click random, 2) Try to reach your home. Rules: No teleport, Can use airports only if you actually reach them. If you want to play babby mode you can use taxis if you are on a city, otherwise, walk only. by yogurtito Mar 21