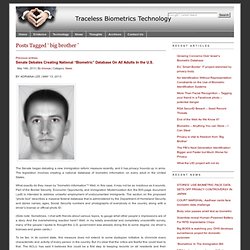 By the end of 2011, the agency expects to be signing up, 1 million Indians a day, and by 2014, it should have 600 million people in its database. It takes about 10 minutes to enter someone into the Aadhaar database. A single UID, earlier estimated to cost around Rs 31 per person, may now end up in the Rs 400-500 territory. The reason: in one hour there are only 60 minutes it is 6 people per hour the “mission” is to provide 1 million ID’s per 24 hours… all that efforts just to create a USELESS invasive Biometric’s collection on a “national database”…. German Police Call Airport Full-Body Scanners Useless.